Did the extension of the rent laws unexpectedly, unintentionally, expand tenant protections as well? Lawyers disagree on whether the wording in the law makes it harder for landlords to remove apartments from rent regulation, The Wall Street Journal reports. The hitch? “Landlords have long been allowed to deregulate vacant apartments if the legal rent for a new renter exceeds a threshold, currently $2,700 a month… but the wording in the new law, appears to allow apartments to be deregulated only if the previous tenant’s rent reached the threshold.”

Lower Manhattan is never, ever going to happen: Big-name tenants are eschewing the World Trade Center for Hudson Yards, The New York Daily News reports, with the former failing to sign any mega tenants this year. Even before 9/11, the Twin Towers struggled to find tenants, they point out, with many of the biggest spaces taken by government agencies. “The ‘wow’ factor is just greater at Hudson Yards,” Colliers’ International vice chairman Leon Manoff told the paper. “There’s just not the same mystique surrounding the downtown market.”

Marketing maven Cheryl Mercuris isn’t the only thing that’s on the market (she once publicly stated that she was dropping $50,000 on a two-week Hamptons house rental so she could find a husband): the New York Post reports that she listed her unfinished duplex at the Aldyn for $17.99 million.

Dreams do come true, at least for those with wealthy dead aunts: this week’s “Hunt” column in The New York Times features a recent college grad who, after eschewing shared apartments for a studio with her boyfriend in Astoria, mused to her parents that she’d really like to buy. They told her she could, thanks to a secret inheritance left behind by her aunt. And the Jackson Heights apartment she found is totally a keeper! The boyfriend… maybe not. At least, their canoodling in the photos is awkward to say the least.

Meanwhile, one long-married Rhode Island couple saved their marriage by selling their traditional house and buying a loft that they divided into two distinct living spaces, with separate bedrooms, kitchens, dining rooms and work areas, The Wall Street Journal reports. “When they are together now, it’s intentional, she says, which makes it more fun: He invites her over to his side for dinner and a movie; they knock on each other’s doors.”

Change can be beneficial. Especially in the case of Greenwich Village chocolatier Koppers, which is scoring a very sweet deal by moving its operations to Sunset Park, where the rent it’s paying will be on par with those in Chattanooga, Crain’s reports. The confectioner will pay $10 per square foot at Liberty View Plaza and receive more than half-a-million dollars in Empire State Development Corp. tax credits.

Richard Tenguerian is a giant among skyscrapers… well, models of skyscrapers. Curbed takes a look inside the studio of one of the city’s most respected architectural model makers.

Finally, should public parks be paid for with private development inside them? Crain’s asks. Brooklyn Bridge Park’s development has angered many, and the incentives given to developers who build in the park are almost certainly too generous, they conclude, but it’s hard to see another way of paying for very expensive waterfront parks. 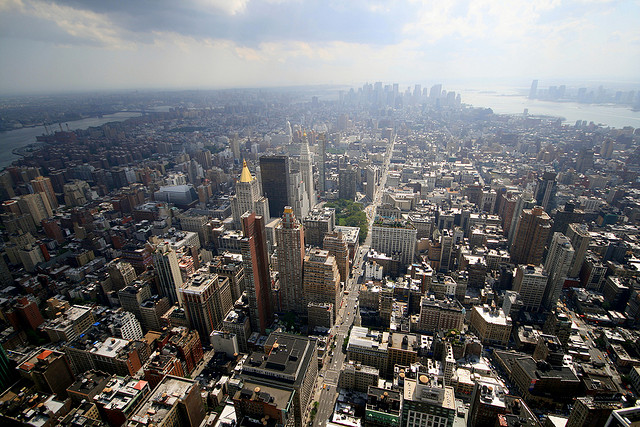