Meet the NIMBYs! Crain’s gets to know some of the more potent project blockers in the city: “They cut their teeth fighting the megaprojects of the Bloomberg years and have perfected the arts of public relations, community organizing and legal action to scuttle development.” Of course, whether they’re doing God’s work or the devil’s all depends on what perspective you’re looking at them from.

We wonder how the NIMBYs will feel about this: Aby Rosen has bought the 43-bed mental health center at 350 Lafayette in Noho, Curbed reports, and plans to convert it to something involving ground-floor retail. They surmise that the shelter, “which has operated out of the location since 1988 and says it is ‘the first ever dedicated to helping homeless NYC women suffering from mental illness to obtain permanent housing,’ ” won’t be around much longer.

Amidst all the recent debate about the city’s growing homeless population, Jeremiah’s Vanishing New York points out that the huge increase happened under Bloomberg’s watch, though the population has ticked steadily up under de Blasio as well. Moreover, they’ve always been with us, as an old Jack Kerouac essay on the Bowery bums illustrates.

William Randolph Hearst’s old aerie in the Claredon is hardly as grand as it was during the newspaper mogul’s time, but it’s still pretty swanky with some 17,000 square feet inside and out, and it’s just gone into contract, according to Curbed. The penthouse was last asking $24 million, down from an original $38 million.

Speaking of moguls: Michael Bloomberg has picked up a $25 million redbrick, 18th-century London townhouse where the novelist George Elior lived out the last few weeks of her life, according to The New York Times. More recent residents have included James Whistler, J. M. W. Turner and Mick Jagger.

And a Chinese investment firm has bought the building that once housed the beloved Subway Inn dive bar for $300 million and plans to demolish it and build luxury condos, according Bloomberg, via Crain’s. Earlier this month, the firm, Kuafu Properties, which means “beyond wealth” in Chinese, bought 1 MiMA Tower.

At least if Montero Bar & Grill on Atlantic Avenue, a longshoreman’s dive that used to start serving at 8:30 a.m. to accommodate men getting off their shifts, closes, the owner stands to gain $7 million, according to The New York Times. The catch? All six of the property owners in the strip have signed an agreement to sell for $56 million, but might back out for less. That, and whatever replaces them will probably be far less interesting than Montero’s, which literally has ghosts.

We’re all for finding ways to use the odds and ends of vegetables, but paying $9 for a salad of cabbage cores and broccoli stalks, as Gothamist reports Sweetgreen is charging for its wastED salad? Only in New York…

Ephemeral New York has a view from Brooklyn, circa 1820.

And finally, who is the voice of “stand clear of the closing doors” that every subway rider hears more than their own mother’s? Charlie Pellett, who works at Bloomberg radio insists that “I’m a friendly guy, I mean it in a nice way,” in a video interview with The New Yorker. 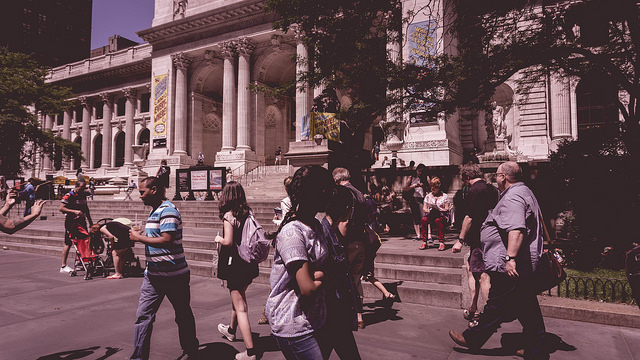