The average price for an apartment in Manhattan has reached $1.87 million, The New York Times reports, an all-time high and one that illustrates just how unattainable home ownership is for so many of the city’s residents. The average price in the first quarter of last year was $1.77 million. But what of the less-distorted median sales price? That was still $980,000.

Which is still much, much, much less than what the units at 111 W. 57th Street, the JDS Development/Property Markets Group collaboration, will go for. Crain’s reports that the developers just secured a $725 million construction loan for the $1 billion spire.

Meanwhile, Brooklyn Bridge Park has selected developers—RAL Companies and Oliver Realty Group—to build the two proposed towers at Pier 6, The Wall Street Journal reports. The contentious towers will be 30 percent lower than initially had been planned and be 30 percent affordable, if the Empire State Development corporation approves the plans. Critics of the proposal argue that as residential development in the park is only to generate revenue for its maintenance, affordable housing units have no place there.

In mega development news, the Court of Appeals ruled in favor of NYU’s expansion plan yesterday, The Wall Street Journal reports. The plan, which will add more than 2 million square feet for the school in the Village, was challenged because its footprint would have overtaken a city lot that over the years had become a defacto park and alienation of park land requires approval by the State Legislator. But the judge ruled that there was no evidence the city ever intended for it to be a permanent park. “In its decision on Tuesday, the judges wrote “that a portion of the public may have believed that these parcels are permanent parkland does not warrant a contrary result,” and that the petitioners opposing the plan didn’t establish that the city had intended for the parcels of land to be permanently public.”

When locals organize a “buy in” for Barnes and Noble, as locals in Forest Hills, Queens did, according to Crain’s, you really know that things are really bad for brick and mortar book stores.

The people you meet on the internet: a Bushwick woman is claiming that a man she met on Badoo.com and went out on several dates with, including an overnight sleepover, stole her Cairn terrier, according to DNAInfo. The man claims he just left the gate open and the dog ran away.

In other sad dog news, a cocker spaniel that was stolen when its owner was out walking it Sunday night in a Bayside park was found dead there, DNAInfo also reports.

In case you missed it: on Monday the mayor lashed out at Gov. Cuomo, accusing him of hurting New York City out of revenge, The Times reports. “Mr. Cuomo, the mayor said, had acted vindictively toward the city, citing cuts in state financing for public housing and what he called an abrupt ramp-up of state inspections of city homeless shelters “with a vigor we had never seen before.”

And finally, this is one of the most aggressive acts of NIMBYism we’ve ever heard of: East Village locals peeved at vegan burger lovers hanging around the tiny, super popular Superiority Burger on E. 9th, have taken to gluing rocks to the wooden tree benches so diners can’t sit there to wait, Gothamist reports. The restaurant spotted the change the day after opening, which has since been followed up with “no bikes” stenciled on the wood. 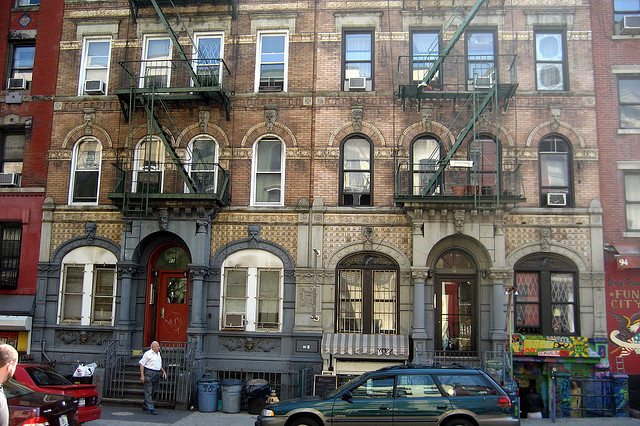