The sun has yet to pass high noon in the career of the artist represented in “Tegene Kunbi: Danjerus Cable” at Margaret Thatcher Projects gallery. Born in Ethiopia in 1980, Kunbi is still only in his 35th year.

After receiving his BFA from the University of Addis Ababa in 2004, he continued his education at the Universitȁt der Kűnste Berlin, and continues to be Berlin-based.

This is his second solo exhibition with Margaret Thatcher, and the explanation for its title (which is also the title of one of its finest paintings) is something he has yet to share with his gallery. Never mind. The radiance of his color schemes more than compensates for the mystery of some of his titles.

Kunbi’s chosen vehicles of expression in this exhibition are stripes of many different colors. It might appear as though stripes are an overly familiar vehicle, having already been employed with such magnificence by Kenneth Noland, as well as by lesser artists like Gene Davis, Bridget Riley, & Gerhard Richter.

For one thing, his paint surfaces are rougher and freer (he works with a mixture of rollers and brushes, and often on several paintings at one time). There is a real textural interest here.

For another thing, he pairs his vertical piles of stripes, or sometimes gives us a triple set of piles—two wider ones at either side of his canvases, with a narrower pile in the center. He varies the width of his stripes, sometimes making them slender and sometimes broad.

Occasionally, he will extend one of his bigger, broader stripes clear across the canvas, uniting the piles of stripes on either side. And occasionally, one stripe will overlay another–with all the little irregularities that shout to the world that these paintings are handmade.

The gallery’s press release describes Kunbi’s color palette as “a powerful translation of his African roots…” Aha, I thought, are we talking Ethiopian rugs? But when I looked for Ethiopian rugs on google, I found none with such brilliant colors.

I did find the kind of Mexican serapes worn as shawls that had more in common with the color schemes in this show—not that I think Kunbi looked to them for inspiration, either. It’s just that stripes are a lingua franca—a truly international language, in folk and popular culture as well as high art.

I realize such terminology must sound terribly quaint and old-fashioned in an era when it is commoner to describe works of art as “things” or “objects” rather than works of art, but I see a very real difference here–one that all the silk-screened soup cans in creation can’t erase.

Creating a handmade serape must be a difficult and demanding task, requiring the highest skill, but somehow employing oil on canvas – the way that Tegene Kunbi does — still produces a work more capable of flexibility and enchantment, hence more capable of evoking that peculiar elation which we call the esthetic emotion.

There’s no single, regular pattern in any of his paintings. Though all share a commonly keen & vibrant sense of color, each has little details of shape, size, color choice and paint application that renders it unique–and this helps to make the show, as a whole, far more capable of giving the viewer an enviable high. 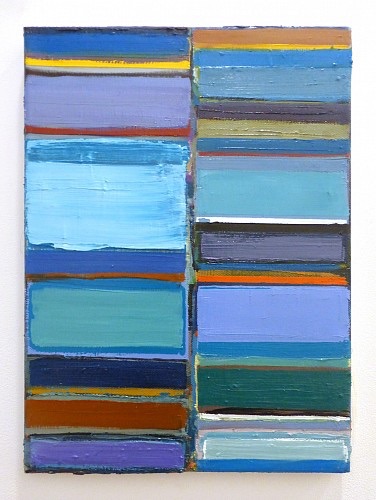