I know, I know. You saw the headline and thought “six episode recap? Good lord, Orly’s gotten lazy.” And you’d be right about the laziness (but only in regards to how infrequently I now do anything except for watch television). Really, the reason a six–episode recap was so necessary is because the storylines of Orange is the New Black season three are muddled. They weren’t organized, there was no central conflict, making this season harder to parcel up into manageable chunks.

But that’s no excuse (and it’s not a good enough excuse to use the word “chunks,” either). To compensate, I’m separating the last six episodes by theme, rather than by sixty–minute installments. Hey, Orange has never been a traditional show, so why review it traditionally, right?

This season, more than ever, relied on a religious narrative. OITNB strives to show what people do to survive and feel fulfilled in a decidedly unfulfilling environment. On one hand, we have Norma and her gang of devoted followers. What begins as a kind of meditation club devolves into a deranged cult, lead by Leanne (Emma Myles).

However, given Leanne’s past, it’s no wonder she craves spiritual satisfaction. Leanne escapes her Amish roots and turns to a life of hard drugs and partying with other former Amish. Although she returns home and is baptized, she is caught with drugs and forced into being a mole, resulting in the imprisonment of the Amish leaders’ children. Having shamed her family and shunned by her community, Leanne leaves. However, her departure from Amish life results in a desperate need to fill a religious void. In season one, she satiates her thirst by worshipping Pensatucky. In season three, it’s Norma (Annie Golden).

The storyline is strong, and it’s funny, but it feels dragged out. It’s a season–long arc about a woman who can’t speak—that’s bound to get boring sometimes. It’s easy to predict that the group will fall apart, as anything with Leanne and Angie involved tends to result in the worst possible outcome. However, it’s a good demonstration of what people will do when they’re desperate for faith—the group goes as far as worship a piece of toast with Norma’s face burned onto it. (It’s either her face, or a fairly good depiction of a really, really sad polar bear, I haven’t decided yet.) What I do appreciate is Ms. Golden’s abilities to tell her story with no words. Her facial expressions, the way her eyes brighten or darken, how her smile twists up almost involuntarily—they’re marks of a good performance.

However, my favorite religious storyline had to be Cindy’s (Adrienne C. Moore) conversion to Judaism. Her motivation was originally diet based—the frozen kosher meals had broccoli in them, after all! But she delivers one of the seasons’ most heartbreaking soliloquies while begging a rabbi to let her convert, tearfully saying, “I think I found my people.” It’s one of the realest displays of emotion we’ve seen on OITNB in a long time, and it might be the best scene of the entire season.

Scratch that. The best scene of the entire season is Angie (Julie Lake) trying to pronounce “Rosh Hashanah” for about five minutes.

OITNB forever has a complicated relationship with love. The show explores the importance, but also the sometimes impossibility, of finding a healthy love within an unhealthy environment.

This season dealt with toxic love more than ever. We began with Alex (Laura Prepon) and Piper (Taylor Schilling), who transform from friendly exes to enemies to girlfriends to an old, bickering married couple. And then back to exes. Their love is tired. I’m not rooting for them anymore. I doubt anyone is rooting for Piper at this point (but more on that later).

However, I will say that Stella (Ruby Rose) was a welcome addition to the cast. She’s smart, charming, and has the eyebrows of some Emilia Clarke, Cara Delevingne love child. Her attraction to Piper—indisputably the worst character on the show—will never cease to amaze me. I guess Stella realized the hard way to “trust no bitch,” after she steals Piper’s money and is promptly framed for contraband. That’s cold, Piper.

Morello (Yael Stone), on the other hand, finds love, a fiancée, and a husband—all in the same day. The lovelorn inmate finally meets her match in Vince Muccio (John Magaro), an Italian-American who accepts all of Morello’s quirks. Sure, he doesn’t know she’s an obsessive stalker with an online shopping fraud habit, but let’s save that for the honeymoon.

Now, it’s time we discussed the unsung hero of season three. Let us, for a moment, celebrate one Tiffany Doggett (Taryn Manning). I do have problems with season three, but for now, I’d like to congratulate the writers for OITNB and their seamless transition of Pensatucky from main antagonist to newly anointed hero. Season two was largely spent getting the audience acclimated to a milder, more benign Pensatucky. Her evolution spanned the entire season; viewers were eased into the idea of actually liking the previously homicidal, religious fanatic.

The first half of season three supplied Pensatucky with the best one-liners and just a touch of sentimentality (think the Mountain Dew christening of her aborted children). So, when Pensatucky’s storyline takes a dark turn, we’re fully prepared to sympathize.

Our sympathy begins when we see how Tiffany’s relationship with sex evolved: in episode ten, Pensatucky’s mother coarsely explains to the ten-year-old that sex is unpleasant, men do what they need to do, and women should let them with little complaint. So it’s no wonder Pensatucky sells sex for soda and cigarettes as a teenager. Tiffany’s flashback reveals she had a boyfriend who respected her sexually, but who also moves away. Minutes after he departs, Tiffany is raped by one of her previous partners.

It’s heartbreaking and unsettling to watch. However, watching Tiffany get raped by Officer Coates (James McMenamin) almost immediately after is horrifying. It’s hard to say which performance of Ms. Manning’s is better: that in which she blames everyone for sins with a religious zeal, or when she blames herself for her own rape. Watching Pensatucky try to justify Officer Coates’s actions—she was being flirty, they’re friends, he loves her—are very deeply rooted in both her upbringing and today’s rape culture. It doesn’t, unlike Daya’s (Dascha Polanco) manufactured rape, mock or diminish victims. It addresses it head on. Thank goodness for Big Boo (Lea DeLaria), who guides Pensatucky through her grief. Now that’s true love.

There’s nothing like going to prison to make you completely reshape as a person, right? I mean, I’m sure there are easier ways to discover yourself, but at prison you learn how to make a shank, so that’s pretty great. This season, we saw the prisoners find their place, fit into their self-made molds—or collapse underneath them.

After a season and a half without her kitchen, Red (Kate Mulgrew) is finally reinstated as head chef. However, the title comes with less cooking and more slopping baggies of mass-produced slop into pans. After wallowing in depression, Red finds inspiration in the prison garden, preparing gourmet meals and hosting elaborate dinner parties. We see Red back in her element, preparing food and feeling, finally, appreciated.

Taystee (Danielle Brooks), too, finds her place as the “mom” of her clique. The title was a long time coming; she’s kept the group together with a level head the entire season. However, the name was solidified upon receiving a bear hug from a grinning Crazy Eyes.

Others aren’t so lucky. Brook Soso (Kimiko Glenn) crumbles under depression, weighed down by an unhelpful counselor (Healy, played by Michael Harney) and crippling isolation. It’s the first time we’re introduced to a Soso that isn’t cripplingly annoying, but rather, we see a vulnerable, scared prisoner. After seeing her story develop, it was surprising to recall that the show has never before dealt with depression—strange, for a story set in prison. I loved Ms. Glenn’s depiction, she fully encompassed all of the different stages that come with depression: anger, frustration, and of course, sadness.

Brook finally finds a family within Poussey’s (Samira Wiley) clique. The union makes sense: both feel isolated, both are lonely, and both are searching for relationships deeper than prison partnerships. Poussey’s silent grasp of Brook’s hand as they float in the lake after Brook’s failed suicide attempt was saccharine sweet in the best possible way.

While Brook receives her happy ending, Sophia’s (Laverne Cox) fate is left unknown. Again, I was surprised that it took until the third season to explore violence against transgender women in prison. It isn’t something I want to see, of course, but it is a very real problem in the American prison system. Sophia’s decline is a fast one, her Mac face is replaced with dark, blotchy bruises instead. Ms. Cox’s performance during her arc is, as expected, powerful and unwavering. She speaks with measured control, falling in line with Sophia’s usual confidence and pride. Her indignant reaction, and then later her tearful one while being placed in solitary confinement, is a memorable shot.

How to Succeed in Business

Ah, business. Who would have thought that the villain of season three would be, not a murderous inmate, but rather an entire company? Bold moves. Caputo saves Litchfield by selling it to a private corporation, but also drastically decreases the quality of life at the prison. Changes result in new guard hires, which essentially results in disaster (a baby faced guard gets pepper spray happy, another stands idly by while Sophia is beaten, and we’ve already covered Officer Coates’s general horribleness).

OITNB never shies away from social issues, but the show takes on its broadest one yet: criticizing both the corrupt prison system and big business in one fell swoop. The only thing I really enjoyed about this storyline was finally seeing Caputo get his—both in a professional and personal sense, he and Figueroa (Alysia Reiner) are hooking up…it’s unpleasant to watch.

But what’s even more unpleasant to watch? Why, Piper of course! She’s started a panty sniffing business (no, for real), and the power and money goes to her head. She ruthlessly berates and fires Flacca (Jackie Cruz), only to hire her back. Oh, and she gets Stella sent to maximum security maybe two days before she’s supposed to be released. What’s that, OITNB? Big business is bad and corrupt? Huh. 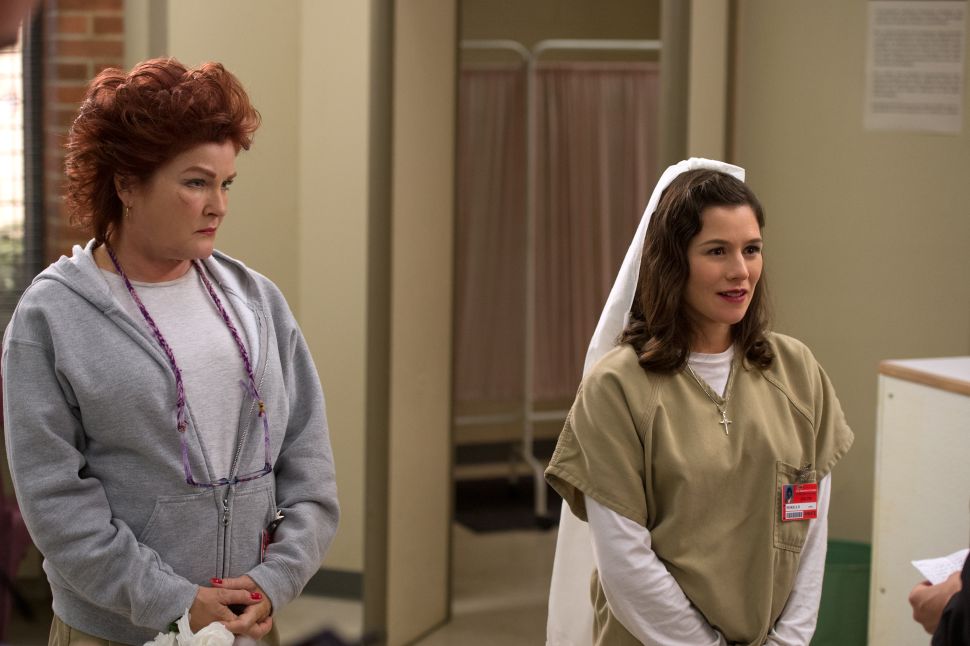 Filed Under: TV, Orange is the New Black, recap, TV