Editor’s note: Orly Greenberg is tvDownload’s new summer intern. Since the rest of the week we treat her like Anne Hathaway in The Devil Wears Prada (Vinnie’s favorite movie), we allow her one day to recap an episode of a show she’s never seen before. This week, Orly has taken it upon herself to understand Alias by only watching, “The Two,” season three’s opening episode.

But seeing as the couple has announced their separation, I’ve decided to honor Ms. Garner by watching and reviewing one episode of Alias. I have never seen the show, but I am confident that all I need to understand is that Jennifer Garner is now a fabulous single lady whose fabulous single lady vibes will guide me through the episode.

– Thank you, J.J Abrams, for your very long and descriptive recaps.

– So, previously on Alias, Jennifer Garner shot a lady, right through her 2004–era velvet tracksuit. A guy with a very nice jawline tells Jennifer that she’s been missing for two years. Ms. Garner looks more confused than that one time Ben Affleck did something nice and didn’t yell “SIKE” after.

– Jennifer Garner’s apartment burned down and everyone thought she was dead. So hunky jawline man cried in the ashes, and then spent the next two years meeting someone else and falling in love. And becoming a teacher. Lame.

– She just started crying, then went crazy and tried to kill cheese grater–sharp jaw man (whose name is Vaughn, but whatever). This is how I imagined she reacted when she found out that Ben had arranged four sets of bunk beds for the eight strippers secretly living in the family’s basement, AND took them to see Inside Out even though she’d told him like, ten times she wanted to see it as a family.

– Jennifer’s hand–to–hand combat is on point. She just used a broom to disarm two men!

– Oh, no, wait, she just got shot with a tranquilizer gun by Vaughn. Vaughn, you bastard! I trusted you! I trusted you more than Jennifer trusted Ben when they got married, even though she knew he totally cheated on J.Lo. We both should’ve known better.

– Jennifer (okay, her name is Sydney) wakes up in a hospital, where her boss tells her that no one knows where she’s been for two years. Fair enough.

– Sydney wants to know if her boss has heard from her mom since Mexico City. Oh, Sydney. If you’re waiting to hear from your mom while she’s in Mexico City, don’t hold your breath.

– Poor Jen. She’s so confused and betrayed. She’s really good at acting it though. You know what this whole thing reminds me of? Gone Girl. They should adapt that for TV, but starring Ben Affleck and Jennifer Garner after they’re divorced. And the entire first season is Ben just trying to figure out whether Jennifer is following the script, or if she’s actually trying to kill him. 10/10 I would watch that.

– Now there’s some assassins on a train trying to kill this one guy. But they seem to be killing everyone except for him. Like, every single person on this train is shot dead except for the one they want.

– Who is driving this train if everyone was just shot? J.J Abrams, I love you, but this is another one of those “now the Island’s hopping through time!” inconsistencies that’s so very infuriating.

– Now the assassins found the little software chip that they were apparently looking for. Also, every bit of technology in this, and just in the early 2000’s, looks animated. And stupid.

– Sydney is going right back to work, which seems a little too soon. Just like all of my divorce jokes. But just like Sydney, this is my job, and I’m going to do it.

– Sydney’s father is in solitary confinement, and she refuses to work until she gets to visit her dad in jail.

– “Michael Vaughn is just a boy who was never good enough for you,” Sydney’s dad exclaims. Jen, girl, are you watching this?

– Also, Sydney doesn’t really have any memories about her capture, like she previously said. She just used the memories as leverage to see her father. She’s as sneaky as Ben Affleck was that time he put his name down as a writer on the Good Will Hunting script while Matt Damon was sleeping.

– Also, this music is awesome and reminds me of Lost, which makes me very happy.

– Sydney’s hair still looks really good while she’s being shot at. But they should really give these agents helmets, or masks, or a light Hermes scarf, really any coverage at all from bullets would be good.

– Sydney goes running off after a CIA operation is ambushed, and her partner tells her the name of someone who can help get her father out of jail. Then she runs off. No money, no car. Just runs. Ends up in Zurich. Who knows how that happened, but you go.

– I’m a little bit confused about this meeting between her and a guy in a brown suit that’s clearly too big for him.

– I wonder why Affleck and Garner decided to get divorced. Where is Ben, anyway? He hasn’t been out for a while, I don’t think. (editor’s note: that’s because he doesn’t want to be seen) Maybe he got swallowed by one of Ms. Garner’s enormous dimples. Do you think that warrants a criminal charge, dimple–swallowing? What’s even the court precedent for that?

– Sydney makes a phone call on a pay phone, which still existed in 2004.

– Sydney takes on an alias to take down her target. She’s wearing pink tinted sunglasses and a red wig. It’s not…it’s not great.

– Okay, she shoots the car once, one bullet, and the entire thing explodes. I take back what I said about technology in 2004.

– But, she gets the microchip that apparently this entire episode has been dedicated to finding. Who knew.

– Jennifer uses a blow torch to almost scorch the chip, blackmailing her CIA boss into releasing her father from jail. I’m sure Jennifer also used that blow torch to make mini creme brûlées for her family and husband, in happier times.

– Now Sydney just gave Vaughn (razor jaw face) the most amazing verbal bitch slap for giving up on her and marrying someone else.

– I don’t want to put words into the show’s mouth, but this episode is basically an allegory for Jennifer Garner’s entire life. 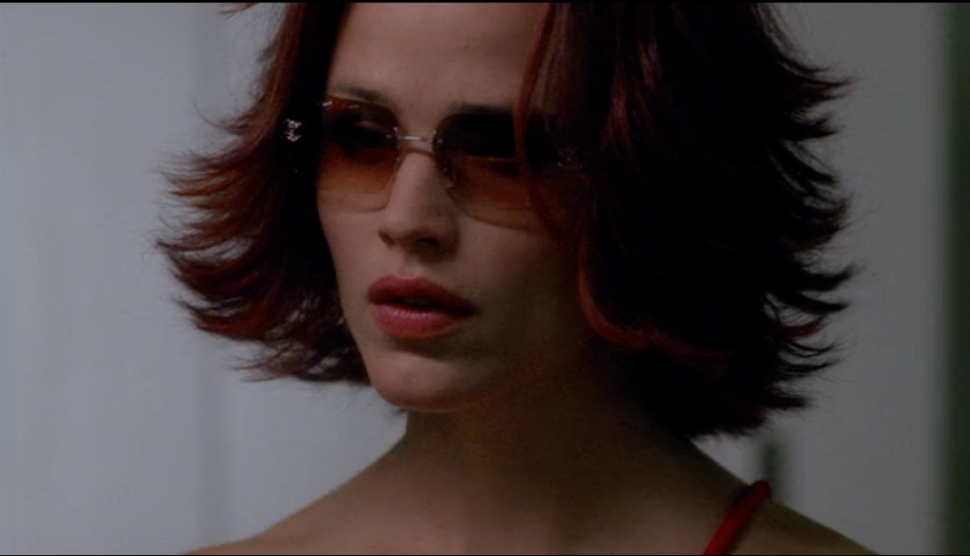