The ostensible purpose of the rally was to urge the PSC—a four-member panel whose commissioners the governor picks and the State Senate approves—to use an upcoming set of meetings to conduct an extensive investigation into the effects of lifting penalties for poor customer service on telephone landlines and other reductions in government intervention. But most of the event singled out the company Verizon, which has been the target of increasing criticism.

The mayor’s office released an audit last month showing that Verizon had not completed the work of a 2008 franchise agreement with the city in which the company agreed to lay enough fiber optic cable to make its high-tech FiOS service readily available to all residents of the city by last summer.

“Right now, we have people on the PSC who have the obligation to take testimony and listen to cities all across the state,” Comptroller Scott Stringer said. “It’s time for Verizon FiOS to live up to the agreement it made with New York City.”

Representing cities all across the state was Syracuse Mayor Stephanie Miner, who lamented that many upstate New York towns depend on Verizon for their telephone and internet, and accused the company of disinvestment.

Councilman Ydanis Rodriguez, a Manhattan Democrat, claimed that the company was doing the same in low-income districts like his, claiming that almost none of his constituents had gotten the access to FiOS promised in the franchise agreement.

“Now it is time for Verizon to take responsibility to provide customers with the right and the opportunity of that the working class should have,” he said, noting the growing importance of Internet access in the modern economy. “In the working class community, people have the same right to access technology as people in the upper class in our city.”

The event occured against the backdrop of a major contract negotiation between Verizon and thousands of its unionized employees. A spokesman for the corporation, John Bonomo, suggested that the city’s labor-friendly politicians are hoping to use Verizon’s failure to meet the terms of the franchise as leverage to pressure the company in its negotiations with CWA.

Mr. Bonomo blamed the delay in completing the franchise work on uncooperative property owners, many of whom he said have arrangements with rival companies like CableVision and Time Warner to only provide tenants with just a single telecom option.

The PSC recently issued a largely positive report on the state of telecommunications service in New York, but the advocates assembled today dismissed it as a self-congratulatory whitewash of the reality of millions of New Yorkers lacking access to the best Internet service.

CWA political director Bob Master emceed the press conference, and admitted to the Observer that the union is in the midst of what he called “very tough” negotiations with the company, and acknowledged that the city could sue Verizon for breach of contract.

BerlinRosen, a high-powered consulting firm with close ties to the de Blasio administration and much of the city’s progressive leadership, handled the public relations for the rally. 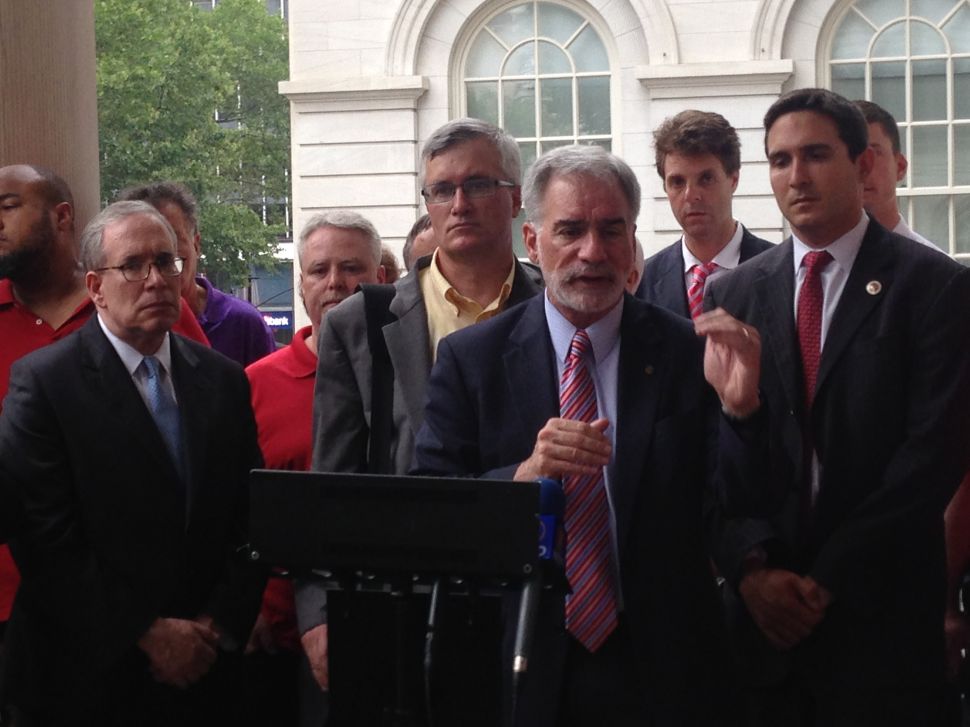