Bidders rang up an impressive total of $1.2 million at an online auction by Hake’s Americana, an auction house focused on historical and pop culture collectibles, reported ArtDaily.

A signed first edition of Dr. Martin Luther King, Jr.’s book Stride Toward Freedom inscribed for Supreme Court Chief Justice Earl Warren, the career archive of baseball Hall of Famer Martin Dihigo as well as selected Disney and Superman collectibles were all on the block at the auction, which was held July 14 through 16.

“From top to bottom we knew this auction was filled with amazing items, many from pedigreed collections of major importance,” president of Hake’s Americana Alex Winter said in a statement. “Obviously our bidders agreed, as we saw some of the most explosive closing-day bidding in the entire 48 years of our operation. The prices realized are a testament to the ongoing demand for premium-quality pop culture collectibles.”

The top ticket item was the King book, which sold for $49,335—above the pre-sale estimate of $20,000 to $35,000. The centerpiece of the political memorabilia section was a personal gift from Dr. King to Warren, who is credited with the Supreme Court’s 1954 decision in Brown v. Board of Education, banning segregation in public schools. The popular pop culture item received bids well into the wee hours of Wednesday morning.

“The price paid for the book did not surprise us,” Mr. Winter said. “It is a historic artifact of the highest magnitude and truly a one-of-a-kind piece. Both men associated with the book were integral figures in the Civil Rights Movement, and the importance of their legacy cannot be overstated.”

The baseballer’s archive, which included his prized baseball card collection, and the Disney lot, which featured a set of displays from Snow White and the Seven Dwarfs, sold within their estimates for $25,745 and $18,075, respectively.

Sales from Superman items, ranging from comics and original art to movie promos and merchandise, totaled more than $250,000. A Superman Paint Set was purchased for $10,755—over 10 times the estimates.

All prices quoted include a 15 percent buyer’s premium. 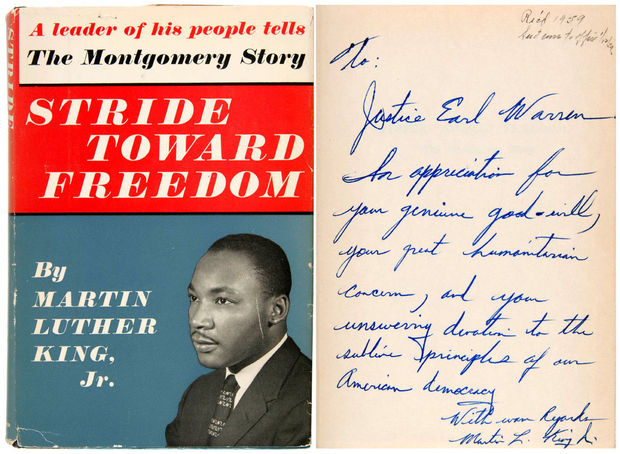