Well, at least someone wants him to be.

The “he” in question here is former Passaic County Republican Chairman Peter Murphy of Totowa, who 15 years ago directed a kickback scheme on behalf of four associates who received a total of more than $70,000 from a contractor who had been awarded more than $1 million in county business, according to a summary of the case by the New York Times.  Murphy was indicted in 2000. In 2001, a jury found the chairman guilty of mail fraud by a federal jury in Trenton. The New York Times reported on that story here.

Now, following years of political infighting and intraparty strife legendary in North Jersey political circles, which at one point resulted in two warring Republican outfits, the Passaic County Regular Republican Organization wants to clear the way to restore Murphy to power. PolitickerNJ obtained an email that circulated last night among the executive members of the Passaic County Regular Republican Organization in which counsel Ronald Fava apparently posits a resolution to break a barrier standing in Murphy’s path.

RE:      Proposed Amendment to By-Laws

Please be advised that at the meeting of the P.C.R.R.O. Executive Committee scheduled for Wednesday, July 22, 2015 at 7:30 P.M., at Republican Headquarters in Wayne, a resolution will be considered at amend the P.C.R.R.O. By-Laws.

Specifically, a resolution to repeal Article III, Section G “Disqualification for Conviction of Crime,” will be considered.

Insiders saw this coming last month when Murphy won the bulk of county committee seats in West Milford and Woodland Park. Murphy subsequently backed the return of Chairman John Traier to the top post on the executive board.

Although Traier won, buzz trailed the chairman about what his reliance on Murphy’s votes would ultimately mean.

Tonight, a day after Fava’s email. that appears clearer. If the resolution passes as scheduled on July 22nd, the full committee would have the authorization to vote the resolution up or down.

A source told PolitickerNJ that Murphy’s supporters are confident that they have the votes to repeal the article in question forbidding someone convicted of a crime from serving as chairman. If the executive board passes the resolution, then it would go before the full county committee. 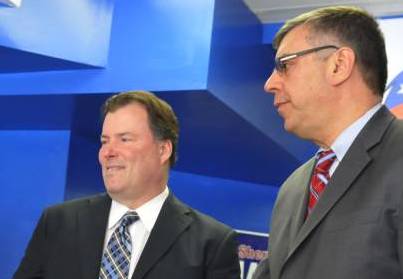