Ray Donovan, Southie’s own guilt-ridden Hollywood fixer, has returned, here once again to work through his anger by watching over the wayward souls of Los Angeles. Two seasons of Donovan Overwatch have yielded decidedly mixed results: he’s got a brother in the hoosegow and a mistress in the ground, his kids both have recent experience fleeing from crime scenes, his estranged wife is busy trying to eat Taco Bell while driving drunk, his surrogate father lies dying, his legacy in ruins, and the one guy that Ray’s been trying to kill since Episode 101 is throwing pool parties in Magnolia Park. Still, it’s a fool who lets the perfect be the enemy of the good.

Who will join the Ray Donovan Cavalcade Of Guest Stars this season? What will be the proportion of Entourage-style show biz hi-jinx to Sleepers-style PTSD melodrama? Join us, won’t you…
THE MAIN EVENT

We find Ray, having burnt his professional bridges at the end of Season 2, slumming it: rescuing local weatherman Bronson Pinchot from a fairly low-tech glory hole extortion scheme. His prospects brighten, however, when he’s invited by local plutocrat Ian McShane to investigate the first act of The Big Lebowski. McShane’s dirtbag son (The Bunny) is being ransomed by local ruffians, while his daughter Katie Holmes (The Maude) suspects a put-on.Ray is expected to clear everything up using some combination of five million dollars, physical assault, and theater-trained glowering. Final score: two dead, one severely menaced, and zero million spent. Though it’s still unclear who in this family is the wounded bird that will stir Ray’s savior complex (smart money: K. Holmes, later to be revealed as a villainess), he’s got great prospects here for interim employment, a fresh fatherly authority figure and sustained glitzy stunt casting.

Little-known fact: felons in California can end their supervised parole by leaving their son locked in a robbed weed dispensary, blowing up their flophouse, and winning a million dollars at the racetrack. So Mickey Donovanis now free to charm his way around a colorful apartment complex, babysitting the daughters of busy prostitutes, currying favor with his neighbors by sprucing up the common area, and generally expressing his inner SNL-game Christopher Walken. When the resident Nugent-esque pimp rebuffs his services as a management consultant, Mickey ushers him to a Xanax-assisted drowning and creates an opening in the local vice economy.
There’s good news and bad news for Season 3 Abby Donovan: she’s no longer relegated to asking Ray what’s going on in his professional life! She’s now relegated to begging him to have anything to do with the family at all. Having lost the affections of her daughter and her boyfriend, she now spends her time managing Bunchy’s Match.com profile and engaging in some bold daytime drunk driving. In a fit of inspiration, she picks up a stray dog the size of a Clydesdale, which should provide warm companionship and physical peril in roughly the same proportions that Ray once did.
Business at the Fite Night is relatively subdued. Terry is ensconced in prison (and not entertaining visitors), and Bunchy has taken over the front office. He can’t manage to collect payment from a co-ed lucha libre troupe that’s set up at the gym, promising both future romantic sparks and more of the bracingly devil-may-care race politics that you’ve come to crave from the Donovangang.
Here we must bid farewell to Elliot Gould, who succumbs to his cancer in the episode’s opening minutes, screaming out for Ray’s help as he goes. Ezra Goodman, we hardly knew you, or what you ever saw in Ray, or what led him to latch onto you as a surrogate father. Notably, though, Ezra’s final visitor is Father Romero (Leland Orser), a priest and member of The Servants Of The Peraclete (a real religious order that assists priests with their personal difficulties), asking after the late Father Danny. Father Romero, a possibly fake, definitely over-achieving representative of the church that has for so long bedeviled the Donovan boys, is well positioned to cause Ray some novel headaches.

Ray Donovan doesn’t appear to have shifted much in its themes or delivery, but it’s heartening to see that, in moving on from Goldman & Drexler and Elliot Gould’s role as Ray’s mentor, it’s aiming to give Ray a more carefully-sketched relationship with his boss. For a show that constantly interrogates the father-son dynamic, and keeps so many characters raging against the protectors that they’ve found for themselves, Ray Donovan never devoted much time to the nature of Ray’s devotion to Ezra, simply because Ezra was rarely more than another panicked voice on Ray’s phone, desperate to get out of a jam. We reset that dynamic with the arrival of Ian McShane’s Malcom Finney, whose unruly family and gratitude to his own father for delivering him from the criminal life knock Ray for a loop.

McShane can be captivating no matter what his character is doing, which puts him squarely in the show’s sweet spot: tremendous actors sometimes called upon to spin their wheels for long stretches.  Given the current fashion for limited-run series and prestige stalwarts like Mad Men and Justified charging towards their finales, it’s jarring to see Ray Donovan set roughly the same table for it’s third season that it’s done twice before. The novelty offered by the arrival of McShane, Holmes, Pinchot and the rest is a welcome grace note.

It’s also interesting to see Abby and Mickey, thwarted for so long in their attempts to exercise some authority over Ray, adopting his strategy for appointing himself the savior and protector of the nearest imperiled soul. Mickey finds Ginger (Fairuza Balk) and her daughter, and Abby finds a tremendous dog. Neither seems equipped to much more good than Ray, who generates more corpses and recriminations than happily-ever-after stories.

NOTES ON THE DONOVAN FAMILY FROM THE DEPARTMENT OF SOCIAL SERVICES
PUBLIC NOTICE: If you received a voucher at the Deadwood wrap party redeemable for a guest arc on Justified, those coupons are now being honored at Ray Donovan.

“Okay, you’re playing a fourth-tier L.A. pimp with a touch of red-state Walmart flair— when the new grill rolls by, I want your jaw on the floor. You’re giving me ‘I’ve never seen such a nice grill before.’ I need ‘I’ve never seen burnished metal before.’”

Congrats to the folks at Kalamazoo Outdoor Gourmet for getting their product placed all the way into the title of the episode.

Urgent memo from the FVX guy who has to composite moving reflections ontoRay’s iPhone screen: can Ray please go back to using his car’s Bluetooth or at least briefly stop walking while he checks caller ID??

Seriously Abby— drunk or sober, Mexican is not a behind-the-wheel cuisine. This is why private-sector engineers labored for decades to develop the chicken finger.

Let us warmly welcome this season’s computer-generated portent of self-destruction: Ocean’s Eleven-era Flashback Elliot Gould. Your predecessor on this show was a dolphin with the voice of Rosanna Arquette, so be prepared to show some flair.

“Thanks for sticking with our show! As a gift, here’s four uninterrupted minutes of ‘Hotel California.’” 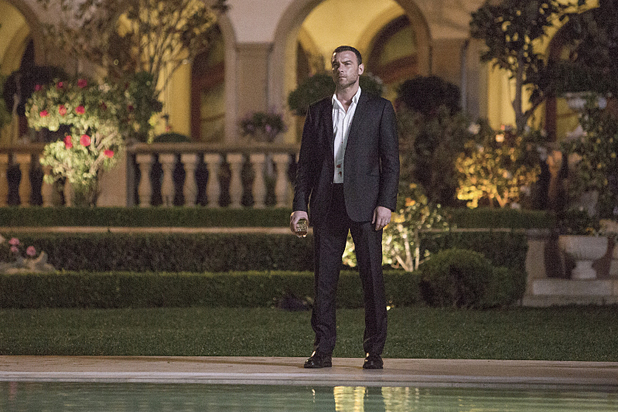