Everything is a mess. Ray wakes up hungover on Ashley’s couch where he’s forced to deal with Steve Knight and his self-help nonsense about the ocean. How drunk was Ray last night? Apparently, he told Steve about Abby’s new boyfriend and Bridget’s dead boyfriend. Time to get out of here, but Bob the Stalker is back. When Steve spots Bob, he jumps off the balcony onto the beach to confront him. Steve gleefully kicks the crap out of Bob until Ray pulls him off. “He hits her! I’ve seen it!” That’s quite an accusation Bob is throwing out there but Ray still tells him to beat it. When Ray asks Steve if he’s hitting Ashley, Steve just says it’s part of their sex life and starts talking about the ocean again. Ray tells Steve that if he lays a finger on Ashley again he’ll kill him. More ocean talk from Steve. He really wants Ray to go swimming with him. No time for swimming.

This is not a good time for Kate to be snooping around in LA but her plane lands at LAX. That mini cassette tape Shorty gave her has a lot of info. A quick call to Ray to tell him, “Go fuck yourself” lets him know she’s back in town. Ray gets Avi to track her down but Avi’s not happy about it. “You should forget about this woman.” Don’t tell Ray what to do, Avi. It only makes his Boston accent stronger.

Cochran is on the phone with the President! His time has come. The next FBI Director is going to be Ed Cochran. Mrs. Cochran is so excited that she wants to have sex with the Volchecks. Hold on, Donna. It might be time to get some new blood at Scrabble night.

First stop for Kate is Mickey’s place. Does Kate think she can get a hardened criminal like Mick to talk? No way. Kate says, “You’re scared of Ray. Ray’s not afraid of anything.” Mickey isn’t going to stand for that, and replies, “Ray’s scared of me. He paid Sully to ki…never mind.” Ah, you fell for it Mickey. That Kate is tricky.

Ray stops by Ira’s office to find Cookie shaking hands with Ira and Lee. They gave Cookie Brown the rights to ReKon and Marvin’s music just like they promised Ray, hoping to protect Bridget and Lee as well as get Cookie out of their lives. One more thing, Ira and Lee are now representing Cookie. That means Cookie has full access to Ray’s services. Ira doesn’t even seem to think that would be a big deal.

This is great news for Cookie because he’s heard on the street that somebody has video of the ReKon/Marvin murder. Oh boy, does Cookie want that video. Ray needs it too because that video will probably also show Bridget leaving the crime scene. Cookie tells Ray that he just wants to bring the murderer to justice and he’ll pay anything for the video.

Tommy Volcheck must be pretty happy that all that wife swapping is going to finally pay off. He stops by the big guy’s office with a little going-away gift but mainly to confirm that he’s going to DC too. When he gets there, he sees Cochran chatting up a new young FBI friend, Travis. Weird. Cochran informs Tom Volcheck that he will be staying right where he is and he’s not getting a promotion either. Cochran is being a real dick about it, too. You can’t expect the director of the FBI to keep having group sex with the same couple over and over again. This is a real blow to Volcheck though. That’s a lesson for the kids out there. A successful career is not built on letting your boss having sex with your wife or husband.

The first person that Ray can think of who might have the ReKon/Marvin murder video is Marty Grossman at Stalker.com. That would be a valuable video, but Marty doesn’t have it. If Ray finds it, Grossman will want a million bucks for it and some Tommy Wheeler exclusives. No problem. Ray can always get the money.

Avi really doesn’t want to track down Kate. She distracts Ray too much and Avi hates to see Ray made a fool of. While trying to convince Ray to leave Kate alone he blurts out “You let another man fuck your wife.” That’s how you get punched in the mouth by Ray. Avi doesn’t understand that Kate is a threat to everyone, but first Ray’s got to go see Cochran. He heard that Kate’s back in town and is throwing a fit over being lied to. Ray apologizes for clocking Avi and gives him a hard drive to upload and send to him.

Over at the LA FBI office Cochran wants Ray to kill Kate. He has a recording of Kate talking to her editor about bringing down the new director of the FBI, i.e. him. She’s going to be a problem. Ray won’t kill Kate and shows Cochran video of the Cochran/Volcheck wife swap. Ray knew he was going to need that dirt on Cochran eventually.

Abby can’t sleep while she knows Cookie is out there, capable of learning that Bridget saw him kill Marvin and ReKon. Abby keeps calling her boyfriend Jim but he doesn’t pick up. Only thing to do is show up at his work place like a psycho. Abby walks into the police station that has a surprising lack of security, but don’t most places in Ray Donovan world? Jim wouldn’t return Abby’s phone calls but since she’s right there he might as well make out with her in the parking lot.

That was pretty cool. Back to fighting crime. Hold on there, Jim. Did you think that the tonsil hockey was NSA? Wrong. Your married girlfriend — with two kids and criminal husband who every cop knows but can’t arrest — needs you to kill Cookie Brown. On paper this relationship is a shit deal. Abby tells Jim that her mind can only be at ease if Cookie Brown is either in jail or dead. She basically says, you don’t have to kill Cookie but can’t you at least plant some drugs on him and get him locked up? No way. Jim is an officer of the law and he will not be a party to criminal activity.

Abby makes the point that Jim told her he was “all in.” What kind of man dates a married woman and won’t kill or falsely imprison someone who might threaten her kid? They’ve been together for weeks. Abby will break it off with Jim if he won’t do it. Nope, Jim is still not going to do it. He has ethics, morals and took an oath to uphold the law. “Be a man.” Abby says. Her alternative line was, “What are ya, chicken?” Fine, he’ll think about.

Volcheck thought his career was in the crapper before. Now that Cochran has seen that sex video Ray’s holding onto, he tells Tom he’s being transferred to a post in North Dakota. Also, Cochran adds that he has been having sex with Megan Volcheck even when Tom wasn’t watching. That actually seems less upsetting than being in the room for it. “You’re fucking finished,” Cochran barks. Maybe letting Ray put cameras in his house wasn’t that great of an idea.

No, he won’t kill her, but Ray does need to talk some sense into Kate. He finds her at her motel. Kate brings up the dead priest and asks if he molested Ray too. Ray tries to change the subject by having sex with Kate. That doesn’t quite do it. While Ray is having rough, possibly semi-forced sex with Kate, she keeps up the priest questions but in the form of dirty talk. You can’t fault Kate for getting caught up in the moment during aggressive sex. Ray also decides to improv by choking Kate almost to death. Almost. Still, the choke looked more “about to kill you” than “you cool with this?” Just about when it looks like lights out, Ray releases his grip on Kate’s throat. Kate is pretty rattled and takes off in a hurry.

The plan for Mickey, Shorty and Cherry’s marijuana dispensary heist has expanded. Mickey borrows $5k from Terry to pay parole officer Keith to turn off his ankle bracelet, the ankle bracelet that seems to never be a problem when Mickey goes to stake-out the robbery or do anything else needed to push this storyline along. Turns out Keith needs more than $5k to take care of his gambling problem so he wants in on the robbery too. Terry needs the money so he can finally move to Ireland with Francis and own a business. Nothing can go wrong here. They’re all going to be rich soon.

The Cochran’s are out at a very fancy restaurant with Ed’s new friend Travis and his wife. Time to celebrate the new job with a new couple. It would be the perfect night if Tommy Volcheck didn’t show up and shoot himself in the head in front of everyone. Not only is dinner ruined but this will take some explaining. Tomorrow’s going to be a long day at the office for Ed.

It took some consideration and thoughtful reflection, but Jim decides that he’ll kill Cookie Brown or set him up. Abby has found the man of her dreams. The man that has a gun and power but she can annoy into doing whatever she wants. Better get the divorce papers ready because this one’s a keeper. Abby thanks Jim by having sex with him in his car.

Ray needs to relax after almost choking Kate to death. Maybe there’s something to all that ocean nonsense that Steve was going on about. Ray strips down on the beach outside Ashley’s house and goes for a swim. Steve hears Ray dive in, over the crashing waves and probably a TV, and goes out on the balcony to cheer Ray on. Don’t you love when an episode goes full circle.

Tune in next week when Jim reconsiders killing Cookie for Abby right after they finish having sex in the car. 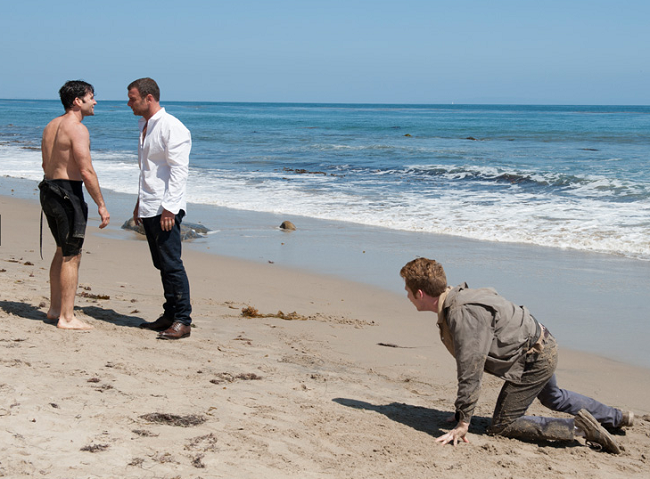