Finally! We get that Cochran/Volcheck wife swapping scene we were owed from last week.

Okay, this episode is opening strong with Volcheck watching his wife having sex with Cochran. Holly Cochran wants a piece of Agent Volcheck but he’s really uninterested. Awkward, all there is for Holly to do is cheerlead her husband, “Fuck her harder, Eddie.”

Over at the Donovan’s, Conor is trying to remind mom about his b-day tomorrow but she’s too busy texting the new boy she likes. Abby is not too distracted to question Bridget about that big diamond earring that Marvin gave her. Bridget calls Abby a victim and when Ray comes into the kitchen it all gets worse. Bridget calls out all the family bullshit, like how Abby cries herself to sleep, how the cops planted weed on Bridget to get to Ray, and how Conor doesn’t know what Truesdale is. Sounds like standard operating procedure for Ray and the fam but all of the sudden it’s a whole thing. Ray is losing control of his family. Abby is trying to date a cop, Bridget is dating a Marvin against Ray’s orders, and Conor has a birthday that nobody is going to remember. Does everybody forget the pizza Ray brought home last night?

As a reward for his cooperation in lying to Kate, the Boston Globe reporter, Mickey was promised a stipend. Lena drops off the first installment to Mick at his crappy apartment. Only $300 every two weeks? What kind of bribe is that? Mickey should have known to negotiate terms up front.

The problem with the Truesdale house, besides Abby already choking out the neighbor, is that Ray can’t afford it. That’s what Harriet, Ray’s bookkeeper, tells him anyway. She’s had to funnel all Ray’s shady cash through the gym. No way Ray could be living in a $4.6 million dollar house running that crappy Fite Club. Ray needs to bring in some money that can be accounted for.

It doesn’t seem really necessary to have Lena lure Agent Volcheck into the sauna under false pretenses so Ray can talk to him but that’s what happens. BTW, what gym has a coed sauna? That’s a lawsuit waiting to happen. Anywho, Volcheck thought he was going to have sauna sex with Lena but then Ray shows up. Ray finds out that Volcheck in fact does not like the whole wife swapping deal but he got a promotion so, you know, the boss gets to have sex with your wife. Don’t they have a human resources department at the FBI? Ray convinces Volcheck to set up Cochran. Avi will install hidden cameras at the Volchecks’ to video record Cochran having sex with Megan Volcheck. Now, Ray will have some dirt on Cochran.

Ray gets a call from Ashley. She has a friend that needs Ray’s help and this guy will pay big money. Done. Ray shows up to the expo center where Ashley introduces Ray to self-help guru Steve Knight who’s gotten himself in some trouble. A guy named Manuel was delivering a sandwich to Steve but interrupted his meditation. That’s why Steve beat the crap out of Manuel, then duct taped his hands, feet and mouth. Now Manuel is restrained in a closet and Steve has to go tell an audience of thousands to believe in themselves. That’s where Ray comes in. You didn’t forget that Ray’s a fixer, did you?

Terry needs to get a check-up from his doc and there is nurse ex-girlfriend Frances. After she said she wanted nothing to do with Terry there she is, going to work. She and Terry have had a difficult relationship because she’s married. Terry’s an accessory to a murder that she witnessed. Everyone has made mistakes here. To be fair, that priest molested a lot of kids including lil’ Ray and Bunchy. Bunchy can barely have sex anymore. So, Frances is still all like, “I don’t want to see you” but then after Terry leaves, she shows up at his place. Mixed signals. They get it on but Frances says it’s the last time.

It’s not one-and-done for Terrence. Terry wants Francis to get a divorce so they can get married. It would seem that the divorce is probably solid advice no matter what her plans with Terry are. Francis says she loves Terry but can’t condone murder, even paedophile murder. She wants to be with Terry but she can’t live that Donovan life so she’s going back to her family. Lucky them.

Remember when Bunchy made the bike for that kid and the kid’s mom, Patty, was digging on Bunch in a big way? She calls him up for a date. A “come over to eat and my kid is staying over his friend’s house” date. That’s the single mother’s equivalent of the “u up?” text. That would be awesome if Bunchy wasn’t a sexual anorexic. It’s all good. Daryl has an extra Viagra and hooks up Bunchy. Daryll also has to explain to Bunchy what a Viagra is because Bunchy is not only a sexual anorexic, he’s also very stupid.

Lightbulb! Terry knows how to get Frances to marry him. They’ll move to Ireland. He’ll sell the gym, take that money and build a new life with his new wife. Terry runs on over and proposes to Frances. She looks like she’s thinking about it. That murder thing that was bugging her before won’t be so bad in another country.

Ray offers Manuel a bunch of money to go home to Guatemala and keep his mouth shut. Once he takes that trip, Ray will put Manuel on the no-fly list. Steve is very impressed with Ray’s ability to offer people money and agrees to pay Ray $100k a month to take care of whatever needs taking care of. Hello, Truesdale.

Shorty got his medical marijuana for the week. He and Mick like to blaze up and talk about crime. That sounds like a good show on its own. Mick’s phone rings and it’s a Hollywood exec, Debra Gerson. Those development people need to take meetings all day so why not talk to Mickey based on the fact that dead Sean Walker had some interest. Here’s Mickey’s pitch. “I know about two things, robbing banks and fucking black chicks.” Better get writing, Mickey, because two other studios have that movie in production.

This extra $100k a month has Ray in a celebrating mood. He calls Abby and leaves a voicemail for her to meet him for a fancy dinner. Probably should have texted. Nobody listens to voicemail.

Date night for Bunchy. It starts off with Patty washing his hair in the kitchen sink. Is that a thing that happens on dates? Where am I going wrong that I don’t get my hair washed, ever? As Patty is drying Bunchy off she starts to kiss him. Better pop that Viagra.

Ray is sitting at a table in his favorite restaurant waiting for Abby. She’s not showing up because a) she’s going to meet that cop and b) you really should have texted, Ray.

Bunchy goes in the bathroom to take the pill. As he swallows it down the kid shows up because he wet the bed at his sleepover. Now Bunchy’s got a loaded gun and it’s become family cartoon time. Now the kid putting his head in Bunchy’s lap which is sort of weird anyway. Please don’t get an inadvertent boner, Bunchy. That is a date ender.

Script writing isn’t easy. It’s even more difficult when you are using a typewriter. Mickey and Shorty are trying to write together but they have different artistic visions. Mickey wants to write a movie and Shorty wants rob a marijuana dispensary. Things go bad when Shorty calls Mickey’s script a pipe dream. That hurts. Mickey comes back with, “It’s as real as your cancer.” Shorty walks off with his feelings hurt. Aw man, why’d you have to bring up the cancer, Mick?

Abby is out at a bar with Officer Guy from Boardwalk Empire. They are playing darts. Second only to pool in seductive bar games. Does this guy know that Ray Donovan slaps around FBI agents on the regs? He will not have a problem throat punching LAPD. Ray doesn’t answer to the cops, the FEDS or even God. The cop and Abby start making out in the bar. This guy is in trouble.

Since he got stood up by Abby, Ray is in his office watching the live video feed from the Volcheck sex party. Harriet calls to tell him that Terry wants to sell the gym. This is a huge problem. The stress is too much. Luckily Ashley shows up at Ray’s office to have sex with him. Finally something is going his way. 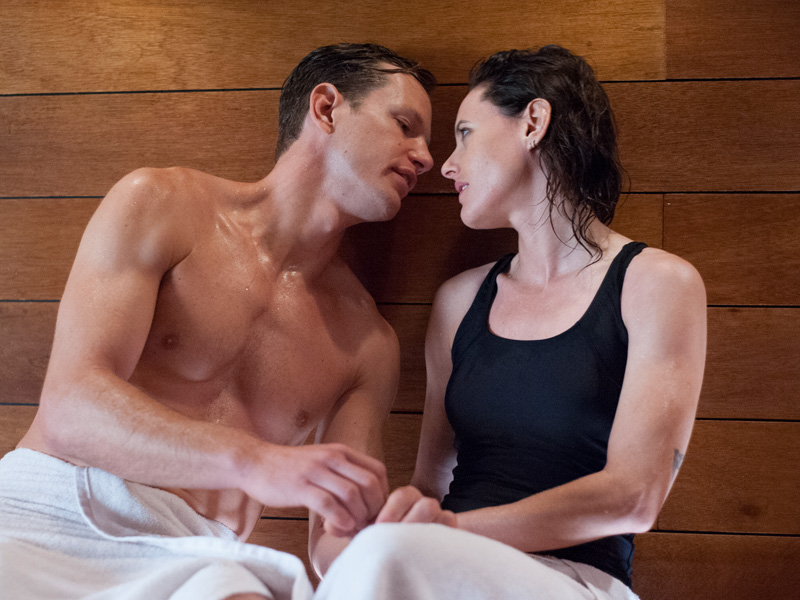