These are trying times. Last week we lost a young promising talent in Marvin Gaye Washington and another shining star in ReKon. There is only one way to stop Cookie Brown, right? go right to the police and have him arrested? Wrong. You must not have grown up in Southie. Ray’s not letting his kid rat.

At the end of last week’s episode, Bridget was in the backseat of the SUV very conveniently laying down when Cookie Brown shot Marvin and ReKon. She wants to go to the police. The time has come for Ray to teach his little girl a lesson: you always tell the cops you saw nothing. Bridget doesn’t understand that Cookie Brown is a rap producer and that means he can have anyone murdered no matter what. He can also shoot two people on an LA street and have no cameras pick up anything.

Abby starts freaking out because it’s late and when she hears about Marvin’s murder, Bridget isn’t picking up her phone. She figures that Bridget must have been killed, too. Frantically, Abby calls Ray. “I have her. She’s fine,” says Ray, explaining that Bridget’s with him in his apartment and she’s sleeping now. It’s not good enough. Abby wants Bridget home right away but Ray says they’ll be back later. Abby even calls her boyfriend, officer Jim, to go get Bridget but he says the best thing he can do for them is look into the murder case.

Bridget naively thinks that if she testifies against Cookie, he’ll go away for murder. She doesn’t know the score like Ray. Bridget had been smoking pot so Ray thinks her testimony would get thrown out, and there is no way a jury would convict Cookie Brown…except for the last one that convicted him. Didn’t he just get out of jail? He’d probably be very easy to convict. Still, he’s a dangerous guy and Ray can’t protect Bridget from him. Ray can protect people from stalkers, the government, the mob, pretty much anything that isn’t Cookie Brown. He is a very big guy.

This is sad and all but Mickey’s got stuff going on too. Mickey has a solid plan to get Claudette back in his life: buy her a knock-off designer purse and two joints. That’s how my grandparents got engaged. Since Mickey was able to get some extra cash from some silverware he stole from the fancy producer party he went to last week, he’s going to spread it around. Seems like a solid plan. Since Mickey saw Claudette’s husband out with another woman, it’s a good time to move in. Hopefully Mickey can get his love back.

Lee is calling Ray all worked up because he thinks Cookie is going to kill him next. He should have listened to Ray and given Marvin over to Cookie like he agreed to. Ray tells Lee to keep his mouth shut about the meeting with Cookie.

The only way Ray can be sure that Cookie didn’t see Bridget is to go talk with him. The only way to talk to Cookie is to go to his house and punch one of Cookie’s guards so he gets hauled into the house after he gets the crap beat out of him. Seems like there should have been an easier way, but the plan works. Cookie is very confident that nobody saw him shoot Marvin and ReKon. Lee is still not off the hook just because Marvin is dead. Cookie wants all the rights to Marvin and ReKon’s music. No problem. It’s all yours.

What’s Bunchy up to? His new girlfriend, Patty, wants to get it on, a lot. Problem is Bunchy is a sexual anorexic and can’t make it happen. Bunchy asks if they can just take it slow which Patty thinks is sweet. It’s a special gal that thinks PTSD is adorable. Bunchy probably should have mentioned he was molested and can’t have sex.

Bridget can’t hold in the lie, so she spills to Abby what really happened with Marvin. You’d think that with all her years with Ray, Abby would know to stay away from the cops but her new boyfriend has made her into a blabbermouth. Having sex with a cop for a few weeks has turned Abby all law and order. This could be a continual problem. Abby has become vindictive and hot headed. She might want to try to put Ray in jail.

Time for Mickey to go get some weed. Shorty takes Mickey to his regular marijuana dispensary. They have lots of cash around and Shorty has been wanting to the rob the place. Once Mickey sees what a sweet score the place could be, he’s all in on the heist. They buy some indica for Claudette and case the place out.

Abby goes and tells Bridget’s whole story to Jim. He decides it’s a good idea to go over the Donovan house to talk to Bridget. Jim gives Bridget the ‘good citizen, don’t break the law, stay in school’ speech. Then Ray walks in and tells Jim to, “Get the fuck out of my house.”

Most women would think that Bunchy’s inability to have sex, his child-like behavior and all around weirdness would be a signal to not let “Uncle Bunchy” bathe a kid. Not Patty. When her son, Clifford, calls out that he wants Bunchy to get him out of the tub Patty sends him right in. At first Bunchy is hesitant but goes ahead and picks him up out of the tub with a towel wrapped around him. As soon as Bunchy has Clifford in his arms he gets freaked and throws him on the floor. Bunchy alludes to Patty that he was afraid he was going to molest Clifford even though he really didn’t want to. Patty tells Bunchy to leave, but he really should have seen that coming.

Poor Bunchy might be a child molester even though he might not want to be one. Are they going to try to have a sympathetic child molester character on this show? Maybe Bunchy could be become like the Dexter of child molesters. He only abuses child serial killers. That show could be a tough sell.

Ray brings Bridget to the police station for her interview. The detective knows who Ray is, of course. All the detectives on the LAPD know all about Ray except for the one that hooked up with Abby. The detective doesn’t allow Ray to go into the interview room with Bridget. She goes in alone to face the questions and does the right thing. She lies all about it.

Oh good, Claudette showed up! Wait until she sees her sweet gift. It’s not just a purse. Open it. That’s right, two joints. That’s class. But what’s the emergency? That’s when Mickey tells Claudette about seeing her husband out with another woman. Come on, Mick. You know better than that. That’s a rookie move. Don’t even talk about the husband and for sure don’t say anything bad about him. Mickey knows this. It sends Claudette out the door. It’s going to be hard to get her back.

As Bridgett walks out of the police station, Cookie is on his way in. Awkward. Cookie gives Bridget his condolences and a hug and tells her it’ll get better. I’m really surprised that Ray let that happen. He even seemed frightened. Ray might be slipping.

It’s not all bad for Mickey. Things are looking good for the marijuana dispensary robbery. There’s one armed security who stays overnight but Cherry, Mickey’s hooker neighbor, will keep him occupied and Shorty can crack the safe. Mick is back in the game. Maybe the rest of this season will be Mickey, Shorty and Cherry robbing banks. Somebody please make that show. Forget about that other show idea I had.

Officer Jim has to learn not to mess with family business. Ray sneaks up behind Jim in the police station parking lot and throws him up against his car. “You want to fuck my wife, fuck her. You put my daughter’s life in danger, I’ll fucking kill ya.” Maybe Ray isn’t slipping. Why is he such a whip to Cookie? Anyway, Jim comes back with some nerdy bullshit about lying. Ray has to let him go when some other officers come out of the station. Those two are going to go head to head for real soon.

It’s been a tough day so what Ray likes to do to unwind is drive drunk to Ashley’s house to see if she’d like to have some angry Ray Donovan sex. Oh, that’s right, she’s dating Steve Knight now. You’d think showing up to try to have sex with your boss’s girlfriend would get you fired. Steve is a little angry until he sees the pain in Ray’s eyes. Then Steve invites Ray inside and asks about his day. That’s a great boss. 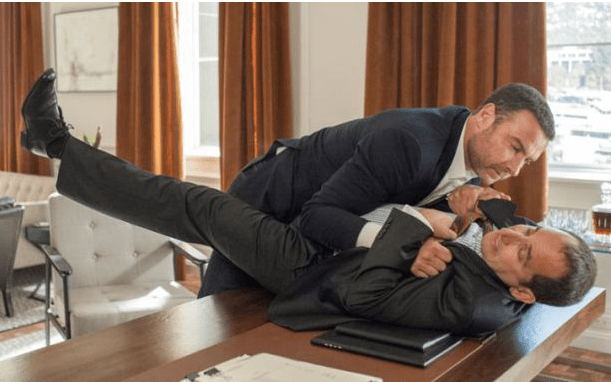