As a Republican in a State Assembly dominated by Democrats, Joseph Borelli can only do so much.

It’s a Sisyphean task to pass any bills. His staff budget is meager. Mayors and governors don’t bother to court his support.

But now that he’s running for an open City Council seat on Staten Island, Mr. Borelli has a chance to make much more of an impact on his district, and even get the media to pay attention to him. And as a loud and proud opponent of the public financing of elections, Mr. Borelli is on the verge of doing something very rare: running for a city office, turning down matching funds, and not relying on personal wealth to make up the difference.

Mr. Borelli’s main beef with public financing is that, in his view, it doesn’t cut down on corruption and amounts to “welfare” for politicians.

Mr. Borelli, who said he has raised about $50,000 already for the November special election to replace Republican Vincent Ignizio, will be breaking from fellow Republicans who have sought city offices in the past. Mr. Ignizio received $78,183 in matching funds for his 2013 re-election bid. Councilman Steven Matteo, a Republican running in a neighboring district, took in $157,766 in matching funds during the 2013 cycle.

For candidates who qualify, the New York City Campaign Finance Board provides public matching funds at a $6-to-$1 rate for contributions up to $175 from individuals who reside in the five boroughs. The idea is to encourage candidates to engage with local voters and donors while helping those who aren’t wealthy run for office. Advocates of public financing also say the strict donation limits and oversight cut down on political corruption.

Unlike former Mayor Michael Bloomberg, a billionaire who spent tens of millions of his own money to win three elections, Mr. Borelli is certified to participate in the matching funds system, according to Katrina Shakarian, a CFB spokeswoman. He can still turn down funding, she said, but he will be subject to the spending limit and all other requirements of being a program participant.

Mr. Borelli is expected to easily win his special election in November. Due to an electoral quirk, he will need to run again in 2016 before seeking election to a full four-year term in 2017. The 2016 and 2017 elections could be more competitive and Mr. Borelli conceded he may take matching funds then.

In a July 10 Facebook post, the Republican assemblyman encouraged supporters to donate enough cash to qualify his campaign for public matching funds.

“Tonight I am asking you to help us meet our financial goals before the tomorrow’s deadline for the first filing period,” Mr. Borelli wrote. “In addition to raising an overall large amount, we must receive 75 contributions from people residing in the 51st Council District in order to qualify for the City’s matching funds program. The matching fund program will match 6-1 every dollar you donate.”

Mr. Borelli, however, said he will “do everything” to not to take public funding in future races. If he declines matching funds, his opponents’ spending caps will be doubled, he said. (This is not true, according to the CFB.)

“If I don’t accept public funds, the money carries over, the donations carry over. As a strategic advantage, I want to be fully qualified [to receive matching funds],” he said. “Ideally I’d like to never have to take matching funds.”

Noting the number of bills he voted against in the Assembly, he wishes he “didn’t have to follow rules that still passed despite my ‘no.’ It’s the rules, it’s the law. I have to live with that.”

Ms. Shakarian, however, said Mr. Borelli’s decision to forego matching funds won’t alter the limits on how much his opponents can raise.

“If a participant declines public funds, it does not cause anyone else’s spending limits to increase,” she said.

This story has been updated to include additional comments from the CFB. 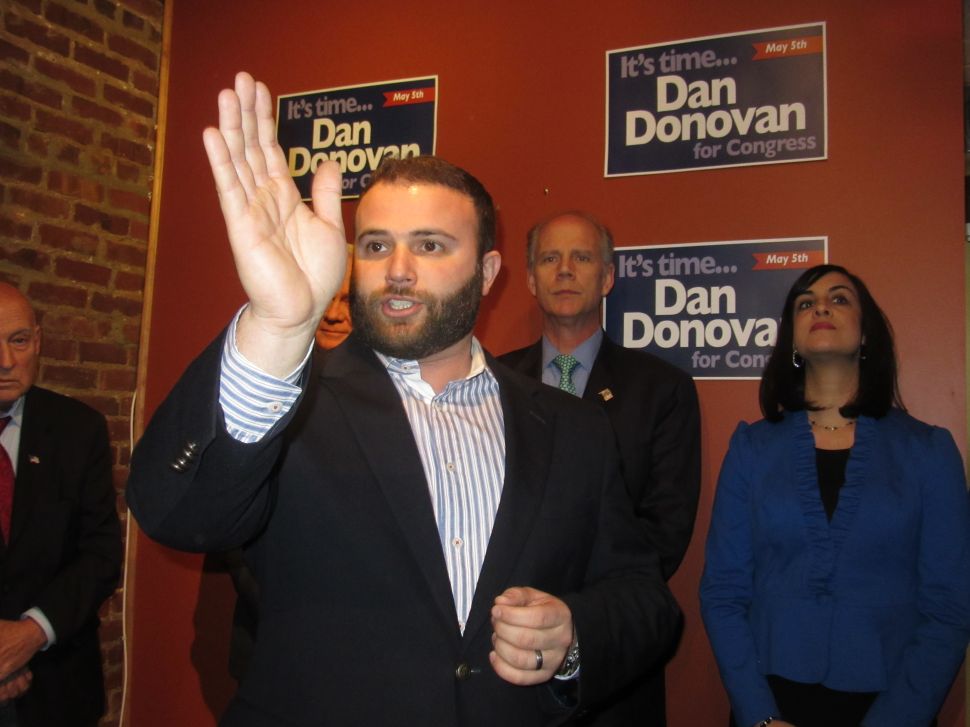