West Virginia, and federal housing official appointed by seven U.S. presidents, died July 12 at age 101 in Boca Raton, Florida.  She lived in Boca Raton and Washington, D.C. The cause of death was heart failure.

Helen Froelich was born in the central Illinois farming town of Gridley in 1913, the year of the introduction of parcel post delivery and the year of the completion of the Panama Canal.   A dutiful student, she graduated from Stephens College, then a two-year college for women in Columbia, Missouri, and went on to earn bachelor’s and Master’s degrees in zoology from Northwestern University.  She studied at the Marine Biological Laboratory in Woods Hole, Massachusetts, and she was hired to set up the science library at Stephens College.

In her long life, Holt’s experiences ranged widely: from flying as a young girl with then little-known barnstorming pilot Charles Lindbergh, to modeling for an agency in the new Rockefeller Center, to serving in the West Virginia legislature, to founding and running a national program that resulted in the building of 1,000 high-standard nursing homes with 100,000 beds, to receiving an honorary doctorate at age 99 from a Big Ten university with a standing ovation following her commencement speech. Many people who knew her were more impressed by her deep, unobtrusive religious faith than by her remarkable professional accomplishments.

As a young woman, some of the senior faculty at Northwestern attempted to dissuade her from studying zoology, saying that she would have to go through the mud and handle insects and amphibians.  That was just the challenge she relished.  She completed her Master of Science degree in zoology with a thesis on artificial insemination of the Japanese salamander. From 1938 to 1941, Holt taught biology at the prestigious National Park College for women in Forest Glen (Silver Spring), Maryland, where she also led field trips and taught hygiene and etiquette.

In 1940, her students contributed her picture to Life magazine for a photo spread of teachers and the dynamic young bachelor, U.S. Senator Rush Holt of West Virginia, happened to see the spread and pointed to Helen’s picture. His sister said she knew that teacher from a national sorority association and could arrange a meeting. The Senator and the teacher met, soon married, moved back to West Virginia, and following his re-election defeat, they began raising three children, including a nephew who joined their family.

In 1955, Rush Holt died of cancer at age 49. Helen, left with three small children, resumed teaching at Greenbrier College for Women, and finished her husband’s term in the West Virginia legislature.  In 1957, Governor Cecil Underwood appointed her to fill a vacancy as Secretary of State, and Holt became the first woman to hold statewide public office in West Virginia.  In 1958, she ran unsuccessfully for a full term as a Republican, but was her party’s leading vote-getter in the state that year.  Subsequently appointed West Virginia’s Assistant Commissioner for Public Institutions, she oversaw state long-term care facilities and the women’s prison.  Holt got acquainted with Dwight Eisenhower, first when he was a candidate and later as president, and toward the end of his second term, he appointed her to implement the newly authorized program in the Federal Housing Administration to set standards for long-term care facilities and to provide insured mortgages for the construction of nursing homes meeting those standards. Her work setting up that program and advancing other housing programs for the elderly was so successful that Holt was reappointed to positions in the Department of Housing and Urban Development by six subsequent presidents, from Kennedy through Reagan.

In retirement, Holt devoted herself especially to church activities.  She also campaigned with enthusiasm and determination for her son, Rush D. Holt, Jr., in his eight successful races for U.S. Congress.  In 2013, when her son campaigned unsuccessfully for the U.S. Senate from New Jersey, she decided that he was not running well in the southern part of the state, and so, at age 99 she set off on a tour of South Jersey — going from diner to diner with her walker to talk with patrons and encourage them to vote for her son.

Holt credited Natalie Tennant, the current West Virginia Secretary of State, with resurrecting her professional reputation.  Holt said that no one remembered what she had done until 2009, when Secretary Tennant inquired about the portrait in the State Capitol of an attractive, young former secretary and discovered that Holt was still alive.  Tennant’s public interviews with Holt drew attention and resulted in several public appearances of the nonagenarian. In 2013, West Virginia University awarded her an honorary Doctor of Humane Letters.  As the 99-year old concluded her speech, which was delivered without notes due to poor eyesight, the large audience rose to its feet in ovation.

Holt was predeceased by her husband Rush Holt, Sr. and daughter Jane Holt Seale.  She is survived by her son, Rush Holt, and his wife, Margaret Lancefield, of Hopewell, N.J.; David Chase, a nephew whom she raised, and his wife Patricia, of Syracuse, N.Y.; her grandson, Rush Seale, his wife Katie Sheketoff, and their children Nathaniel and Emerson; step-grandchildren Dejan Miovic, Michael Miovic, and Rachel Novsak; and nine great-grandchildren. 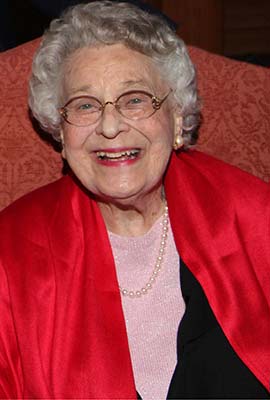