TRENTON – Yesterday marked the six-year anniversary of Operation Bid Rig III, the federal investigation launched by then US Attorney Chris Christie that lead to 44 indictments and many convictions for New Jersey mayors, assemblymen and city council members.

Seen as one of the deciding factors in Governor Chris Christie’s victory over John Corzine in 2009, the question remains whether the legacy of the investigation, or Christie’s erstwhile image as a principled, anti-corruption prosecutor will provide the same kind of leverage during his presidential bid.

Former Bid Rig III defendant Lou Manzo, whose last extortion and money laundering charges were dismissed in 2012, says that the governor shouldn’t hold out hope that the memory of the investigation won’t be overshadowed by the Bridgegate scandal – or by allegations of selective prosecution and preferential appointments for political allies.

While Christie was pursuing Democratic officials, Manzo, who wrote a book on the subject, claims he was “[forgoing] prosecutions of political operatives who were key in his campaign.” Manzo mentioned the names of Ocean County Republican Party Chairman George Gilmore and then Monmouth County Republican Party Chairman Joe Oxley, whom Christie nominated for the New Jersey Superior Court in 2012, as people whom a less politically habituated prosecutor might have drilled.

Manzo went on to say that the Republican chairmen were “prominent supporters of him in his primary election for governor” just months after being embroiled in the investigation, and that “[many] of the individuals who were part of that US Attorney team participated in that prosecution, were making donations to him while the prosecutions and investigations went on – another breaking of the law incidentally – all wound up in Trenton working for him.”

Manzo offered that the governor’s time as a prosecutor could come in handy if he eventually seeks a position in another president’s cabinet. “Any other candidate would love to have him in their camp for his fundraising prowess,” said Manzo, adding that “whether he would pass a senate confirmation hearing is a whole other story.”

Hudson County saw major changes during the investigation and subsequent trials with the convictions of leading officials in Hoboken and Secaucus. Former Media Consultant to the campaign of Democratic Hoboken mayor Peter Cammarano, Paul Swibinski says that for all the fanfare in the press at the time, Christie’s prosecutorial victories were limited in scope and substance.

“Unfortunately, some people got caught up in that and they were mostly lower-level, minor players,” said Swibinski. About Cammarano himself, he was more forgiving.

“He had a very bright future, but he got caught up in a situation where he was trying to raise money for his campaign and he accepted money he should not have ever taken. I’m sure he regrets it to this day,” he said.

On Christie’s chances of using events in the time since to his advantage, Swibinski pointed to New Jersey’s lackluster bond rating, depleted transportation trust fund and beleaguered pension system. “This is a man,” he said, “with zero accomplishments as governor.”

Swibinski’s personal favorite among the Republican poll leaders? “Donald Trump! I’m enjoying the spectacle, with a popcorn and a Vitamin .”

The other part of the legacy ties to Cammarano and the emergence of Fulop as a political force, one insider noted.

Seen at the time as a rising star, the Hoboken mayor would have been a rival to Jersey City Mayor Steven Fulop.

But Cammarano imploded while Fulop increased his political clout, using the indictments of those political allies of Jersey City Mayor Jerry Healy’s as political traction going into 2013, when he beat Healy; and as the lone young star in Hudson, began his march toward the 2017 gubernatorial contest.

Fulop’s refusal to publicly endorse Christie’s reelection in 2013 and then Bridgegate, it should be noted, marked the beginning of the end of any goodwill Christie and Fulop built out of the mutually career-advancing aftermath of Operation Bid Rig III. 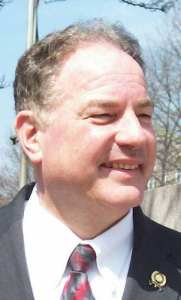