Last week, the Wall Street Journal reports, former Texas Governor Rick Perry gave the speech of the campaign so far. Yeah, that Rick Perry—the fellow best known nationally for his “oops” moment during his ill-fated 2012 campaign. And “the former Texas Governor doesn’t spare the GOP, Texans or Americans for historical offenses against African-Americans.”

Nor did he spare himself.

It was a distinguishing moment for Mr. Perry. To many, there are only two relevant phases of conservatism today, the erudite and urbane Mitt Romney kind and the Arizona Sheriff Joe Arpaio kind, the second of which is sure to bring a long slow death to the GOP.

Possibly only Rick Perry can change this. In effect, he has come in from the cold. He has left the margins and joined the American mainstream. Just in the nick of time, if not too late, as he registers in polls in New Hampshire, when he registers at all, below Mike Huckabee and just above South Carolina Senator Lindsey Graham.

Which makes no sense for a man who might be considered the most important governor of a big state since Franklin D. Roosevelt.

For America to go forward in one piece, we might look at Mr. Perry again, in the clear light of dawn, with fresh eyes.

“Nobody seems to be taking Rick Perry very seriously in 2016 because he proved to be such a poor candidate during the 2012 Republican primary debates,” Matthew Yglesias wrote this Fourth of July in Vox. “But he does have at least one big thing going for him – far and away the best and most coherent story of any candidate in the field about why his record in office should make you think he could deliver the kind of prosperity the voters crave.”

So why doesn’t he register in polls?

I’ve a simple theory about why the “Oops!” moment played on so endlessly and still does, why Perry’s new eye glasses got such a girlish giggle out of the MSM, why such a successful governor draws so little interest this side of the Mississippi.

Because New York hates Texans and most all media in America are New York-based. The New York Times editorial page editors make no attempt to conceal it. And this is new as just a few years ago many of the great and good status editors in New York, Harold T.P. Hayes of Esquire, Willie Morris at Harpers, Howell Raines, Wayne King at the New York Times, were Southerners.

Today it is a red state/blue state war by other means, much like the Civil War but expanded now across the continent from New York to Los Angeles. And Mr. Perry is Basil Ransom, protagonist of Henry James’ classic, The Bostonians, the distant Southern cousin, son of a wealthy planter, who chides them when he visits the Back Bay that he likes to dine with “six gun and bowie knife.”

There is something else that bugs us: What we in the Northeast may be seeing in the sensational economic rise of the West is our own decline, and we may be right.

Mr. Perry began his speech with a startling story set 99 years ago in Waco, Texas, where 15,000 people were watching the mentally-disabled 17 year old Jesse Washington, “to be tortured, to be mutilated, to be tied to a tree. Someone lit a fire under Jesse and raised him up in the air. Jesse tried to climb up the chains to keep from being consumed by that fire. Someone started cutting his fingers off, so that he could not climb that chain. One man castrated him. Another used a pole to prevent him from pulling himself away from the fire.”

And the burden of Southern history persists today, seen so vividly in the tragic massacre at the AME church in South Carolina. Perry unplugs, and the burden is somehow momentarily lifted. Possibly as it allows us to engage again deep and trenchant issues, as we did in a former day when we—when journalists and newspaper people in the Northeast—read Faulkner and Flannery O’Connor. And Willie Morris and C. Vann Woodward.

“Even today, we Texans struggle to talk about what happened to Jesse Washington,” said Mr. Perry. “We don’t want to believe that our great state could ever have been the scene of such unimaginable horror. But it is an episode in our history that we cannot ignore. It is an episode that we have an obligation to transcend. Now we made a lot of progress since 1916.”

He hopes, given the horrors of the past, to convey a pilgrim’s progress from then to now and does so with some success. For example, he said, “Texas high school graduation rates were 27th in the nation in 2002. In 2013, they were the second highest in America. Our most recent graduation rate for African-Americans, number one in this country, 13 percentage points higher than the national average.”

For America to go forward in one piece, we might look at Rick Perry again, in the clear light of dawn, with fresh eyes. Because if we do not see ourselves as one, New York and Texas, we may soon be seeing ourselves in parts. 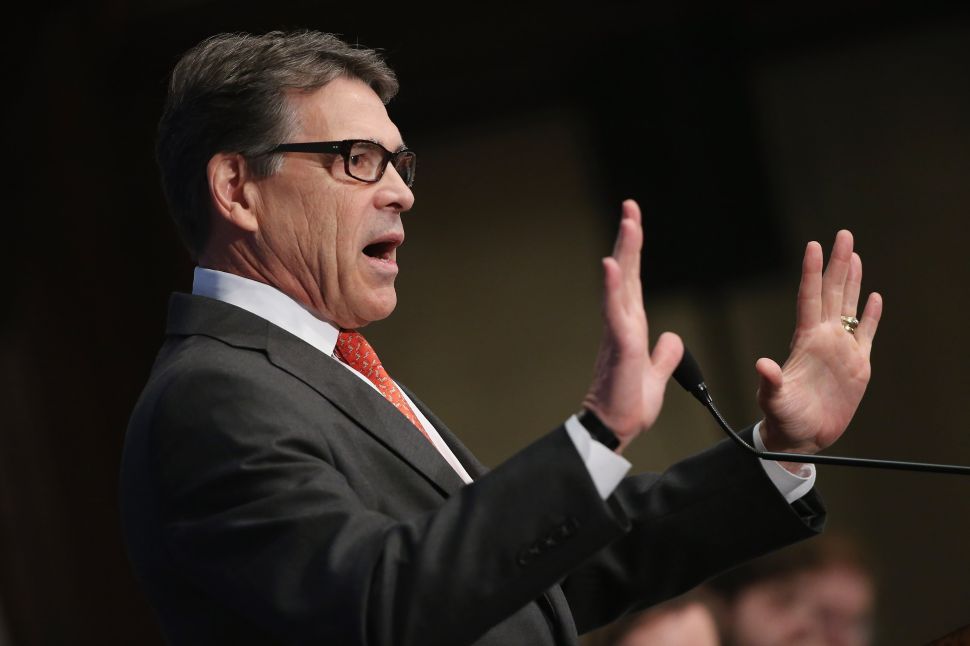