Robert Wilson pioneered performance art and experimental theatre in the ’60s and ’70s; he is known internationally today as the director and creator of a series of hallucinatory, elegant artworks and theatrical works, among them Einstein on the Beach. Having just premiered works in Berlin, Moscow, Tallinn and Spoleto, the artist last weekend returned to his school/residency/laboratory for performance, Southampton’s Watermill Center. Alongside 140 artists from around the world, he hosted the 22nd annual Watermill Center Benefit on July 25, probably the art world’s most highly anticipated and elaborate summer event.

Here, his thoughts on performance art:

Today, performance art has gone above ground, and it is being recognized as an art form. Most of the major museums in Europe and the United States are showing performance art the way we see painting, sculpture and film. Marina Abramovic´ and other artists have showed their work at the Museum of Modern Art to crowds of thousands. It is suddenly mainstream.

When I came to New York in the early ’60s from Waco, Texas, I had never seen theater. I had never been to art galleries or museums because there were none (near Waco).  One night, a friend of mine took me to Judson Church, to watch Yvonne Rainer rehearse. She moved to one side of the room and picked up a piece of paper. She then moved to the other side of the room and picked up another piece of paper. There were some people tumbling on a mattress. I was mesmerized.

She was utilizing objects in a completely abstract and non-narrative way. Was it dance? One did not know. It was not a dance, not a moving sculpture. It was a something else. It was a work.

I began to see modern dance, the works of Martha Graham, George Balanchine, of Merce Cunningham and John Cage. These works of abstract ballet fascinated me. They were formal yet free, architecture in motion. I saw the works of Robert Rauschenberg, Lucinda Childs, Meredith Monk. I heard the music of Philip Glass and watched the films and performances of Jack Smith.

My only exposure to performance as a child had been peripheral—but it was formative. When I was a child, I stuttered when I spoke. My parents had sent me to therapists, people in Chicago, St. Louis, all over, to try to correct the problem. A woman named Byrd Hoffman was teaching ballet to my sister. She was a dance instructor in her 70s.

She heard me stutter, and she told me, “You should take more time to speak. You should speak slowly.” She said one word over a long period of time. She said go home and try it. I did. Within six weeks, I had overcome the stuttering.

In 1968, I started a performance group called the Byrd Hoffman School of Byrds, named in tribute to her. It brought people together from various cultural, social and economic backgrounds: artists, people from the street, factory workers, doctors, pre-school children, people with very little formal education, people with university degrees. It was an underground movement in lower Manhattan. Together, we congregated and supported each other. We were the public and the audience. Because the major theatres were too expensive to rent, we performed in alleys, streets, rooftops, art galleries, churches, and the lofts in which we lived. I began to make performances in my loft at 147 Spring Street. It was a real downtown community.

What was exciting about the work of the early ’60s that happened in found spaces—on the street, in art galleries, alleyways—was that it will never happen again. It is not meant to be repeated. And we will live with our memory.

At about this time, I began to assist an occupational therapist that worked with hyperactive and brain-damaged children in Brooklyn. She believed in a close relationship between mental and physical activity. We devised a series of exercises emulating the first movements of infants. With these exercises, children who had difficulty learning began to improve. I could understand the children, because I had been there. Many children are traumatized because our edućtion is so rigid. If you really listen to a kid, he will tell you what he is able to do.

That really led into everything I am doing now, both in theatrical performance and at The Watermill Center. My work is something that happened not as a result of formal education, but by living life. You learn to walk by walking. And you also learn to walk by falling down.

In the early ’90s, I used all of my savings to purchase an abandoned telecommunications laboratory on Long Island, in Mill. I wanted to create a center where artists could collaborate, learn and grow together. I wanted to provide a space for a community of artists once again. Over many summers, alongside artists and friends, we constructed The Watermill Center, a laboratory for performance.

Over the years, the Center has hosted artists and thinkers of all kinds. In everything we do, from the year-round residencies to our summer program for emerging artists, our purpose is to bring people of all kinds to the same table for a moment. We always ask, “What is it?” not say what something is. For if we know what we are doing, there is no reason to do it. We should always do what no one else is doing.

Watermill has grown from one table of friends to many tables. This year, we hosted 140 artists from over 30 nations, who created original works on-site, on view for only one night. Our annual benefit is a celebration of the power of the instant: communal, collaborative, fleeting. Every year it is different. This year’s benefit was called “Circus of Stillness: The Power Over Wild Beasts.” It united the worlds of music, theatre, design, architecture, fashion and society: a gesture into space.

Lincoln Kirstein, co-founder of the New York City Ballet, said in the late ’50s, “Modern dance will have no tradition.” For me, the interesting thing about performance art is that it will have no tradition, in the sense that the pieces are made for the moment. They are not made to last, the way, say, a play of Shakespeare, Moliere, or Tennessee Williams is. They are events of our time, like a shooting star.

August 9 is the annual Discover Watermill Day—an afternoon of art installations (many created by International Summer Program participants and seen at this year’s gala), performances, workshops, tours and family activities. The Center’s Scaler Summer Lecture Series kicked off on July 27 with Nadya Tolokonnikova of Pussy Riot and continues with lectures by Philip Glass, Jessye Norman, Fern Mallis and more.

Events are free and open to the public. 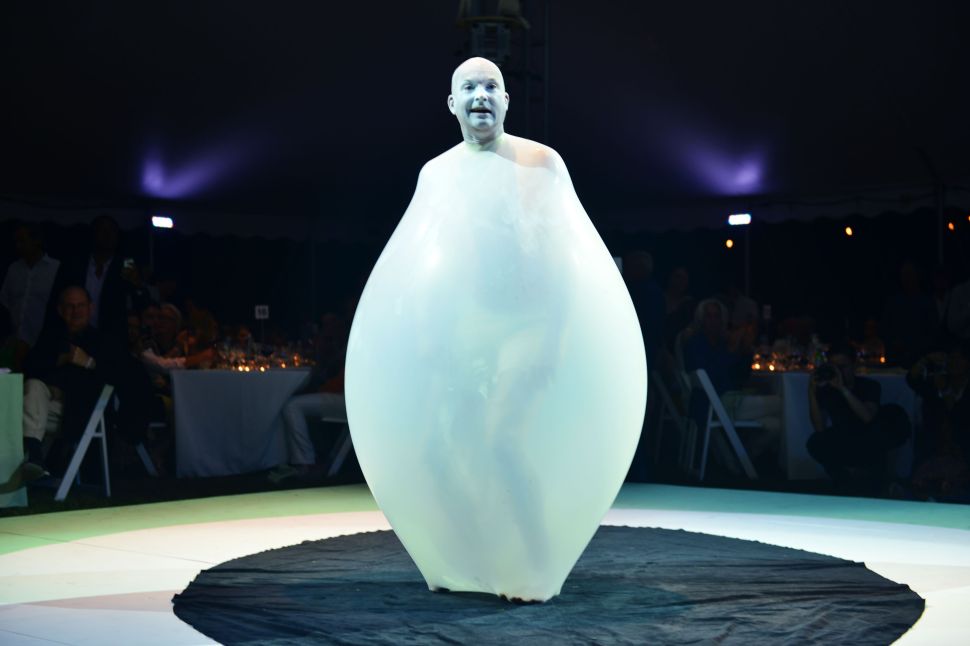