You know there’s always been one nagging question I’ve had about Running Wild with Bear Grylls. I mean, I know there’s got to be at least one camera person out there with Bear and whoever, that’s not a mystery. And I know there has to be some access to medical personnel or equipment, because when a falling boulder crushes a beloved 90s sitcom actress’ head one day, and that will happen, the crew can’t just be left out to dry. But the one mystery that still baffled me, the one that until now, until this very episode starring accomplished stage actor, Modern Family‘s Jesse Tyler Ferguson, was this: where does everybody poop? A diet consisting of “that thing we found in the river” mixed with “some stuff we scraped off a rock” doesn’t exactly mean you can hold it for 48 hours.

Apparently the answer is you do your business in a snow fort high in the the Italian Alps. Fool-proof plan. That clears that up, then.

But yes, Jesse Tyler Ferguson! The Italian Alps! Bear lets us know that Mr. Tyler Ferguson requested Bear “push him right out of his comfort zone.” Bear then flies in riding a helicopter apparently nicknamed “His Comfort Zone,” and off we go.

Here are the most pivotal moments of Bear Grylls and Jesse Tyler Ferguson’s journey along Italy’s South Tyrol.

Next week on Running Wild with Bear Grylls we have Kate Winslet. Bear, as a survival expert in all scenarios, hopefully takes some time to point out that there was totally room for two on that door. 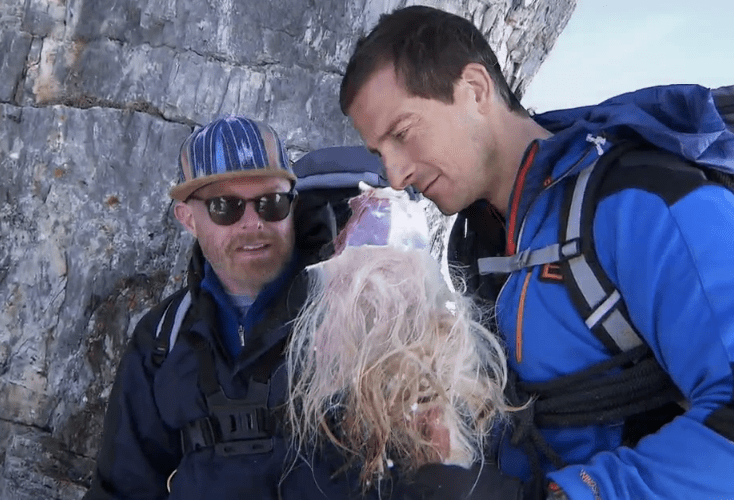