This was a strange episode of Running Wild with Bear Grylls. Not because Kate Winslet isn’t a lovely person — quite the opposite, actually. She’s almost too lovely? I don’t trust people that are that pleasant in any scenario, much less dangling off the side of a cliff-face. But pleasant she was, and pleasant was this episode. The image of Bear and Kate Winslet having tea on a mountainside should probably replace the British Flag, in my humble opinion.

But it was strange in the sense that whoever put this episode together seemed determined, nay, hellbent on reminding the audience that Kate Winslet is an ACTRESS, and BEING AN ACTRESS won’t help once she’s RUNNING (in the) WILD. I mean, I know there’s usually at least one “if they think [insert job] is tough, just wait until Bear Grylls makes them [insert terrifying wilderness scenario].” But this episode had several. It was slightly overbearing (pun so very intended). It wouldn’t have shocked me if by the end a voice-over was saying something like  “Once you’re, uh, forced to plunge off a waterfall, uh, acting lessons are, um, not going to help a whole lot!”

Luckily, all this show has to do is teach me how to light a fire using lip balm and a tampon, and I’m immediately back on board.

Here are the most pivotal moments of Bear Grylls and Kate Winslet’s adventure across Northern Wales’ Snowdonia Mountains.

Next week on Running Wild, we have Hangover trilogy star Ed Helms. Let’s hope this vacation isn’t as much of a disaster as his last vacation. 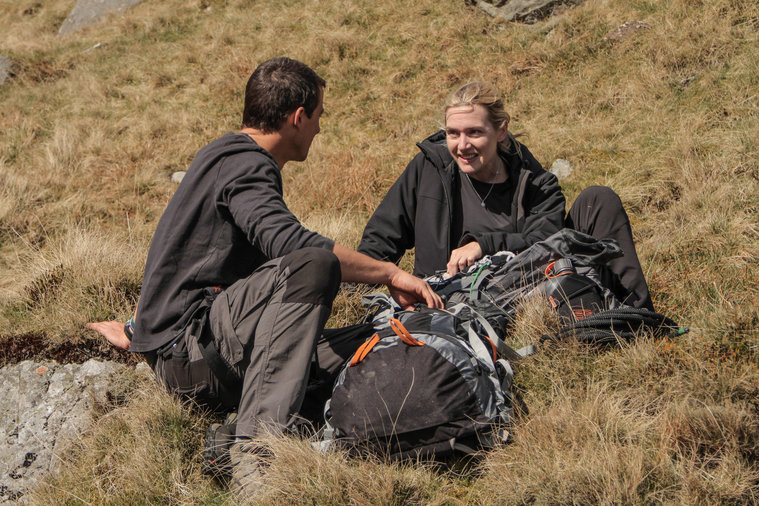