What? How did no one tell me that Running Wild with Bear Grylls, quite possible the shining crown jewel in all of TV history, quietly and with very little fanfare from NBC premiered its second season last night. What do you mean it’s my job to know that? Oh, it is. That’s fair.

But, yes, season two premiered, and it was like we hadn’t missed a beat together, Running Wild. As many/absolutely none of you probably remember, last season I was this show’s most stalwart fan. I’m also not sure how it’s possible not to be. It’s just nature-cyborg Bear Grylls taking famous faces out into the wilderness and trying to commit murder-by-wilderness for an hour. Channing Tatum back-flipped out of a helicopter. Tom Arnold fell down a mountain. Zac Efron forged a shirtless man-bond with Bear that will most likely last until the end of time. It was great fun.

This season started things off with Kate Hudson, who Bear refers to multiple times as the “queen of rom-coms.” Which would be a fantastic title to have, if Bear didn’t immediately follow that up with “but there’s nothing romantic [dramatic, manly pause] about the wild.” Which actually seems like a pretty general conclusion to come to, but Bear Grylls said it so I take it as gospel. Sorry, nature-loving girlfriend.

Without further ado, here are the most pivotal moments of Bear Grylls and Kate Hudson’s expedition through Italy’s Dolomite Mountains.

Next episode, Bear takes Jesse Tyler Ferguson out into the snowy wilderness. Because Mr. Ferguson is a part of Modern Family, I think it’s safe to say Running Wild will finally win an Emmy. 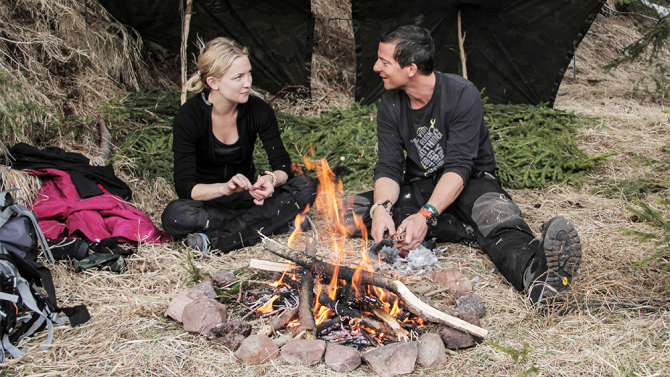