Russell Simmons, the hip hop mogul and activist, thinks abusing animals is on par with the Holocaust and the enslavement of African-Americans.

“There were people for slavery, remember? Almost everybody. Slavery was fine. There’s people that put people in ovens,” Mr. Simmons said outside City Hall today, where he was advocating for the ban of horse-drawn carriages from New York City streets.

“There are people who have, there are all kinds of ethnic cleansing. People for it,” he continued. “Dominion over the animals did not mean abusing animals, senseless abuse of animals. 100 billion animals born into suffering–when we change this, this is a step toward being more conscious about the suffering of all animals.”

Mr. Simmons spoke with reporters from the shotgun seat of an antique car, one proposed replacement for the horse carriages. Activists from NYCLASS, a powerful animal rights group, stood with him and held signs calling on Mayor Bill de Blasio to follow through on his promise to ban the carriages.

When reporters pressed Mr. Simmons on whether he actually believed the Holocaust, in which 6 million Jews perished, was equivalent to the deaths and suffering of animals, he did not back down.

“I think there is unconscious, when species, any species is suffering senselessly and we support it, it’s pretty bad,” he said. “You’re asking me, do I think that people who are unconscious to the suffering they cause to 100 billion animals–the worst holocaust in the history of humankind, the suffering of animals, the abuse of animals, and yes you’re all guilty in my opinion.”

Insisting people who didn’t share his views on animal rights would be on the “wrong side of history,” he later added that he “wouldn’t compare” the direct suffering of Jews to animals. But he was clear he considered animal abuse “a holocaust.”

“Why, you don’t like the word holocaust? It’s a fucking holocaust,” he said.

Mr. Simmons, who repeatedly claimed to be a friend of Mr. de Blasio’s, also took the mayor to task for not making the right “deal” to force the City Council vote for a carriage-banning bill. So far, many lawmakers are reluctant to vote for a ban because about 300 unionized carriage drivers could lose their jobs.

Mr. Simmons promised he and animal rights activists would “get in” Mr. de Blasio’s “ass” if action didn’t come soon. He also wouldn’t say that Mr. de Blasio is a good mayor.

“I think he’s a good person. He’s gotta have a lot more heart to be a good mayor,” he said. 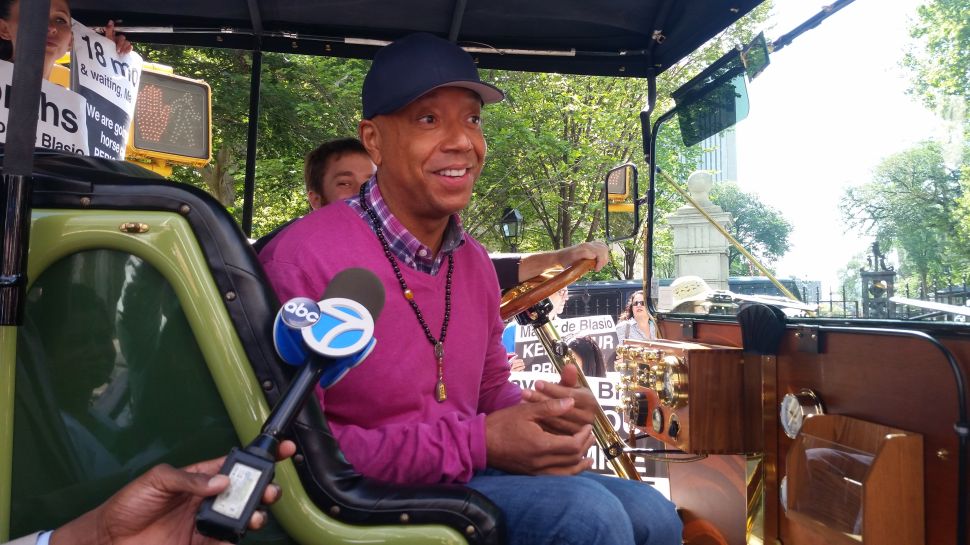