More than 100 supporters of Vermont Sen. Bernie Sanders‘ bid for president gathered in Die Koelner Bierhalle in Park Slope to network and watch a livestream message from the upstart candidate—one of at least a dozen such gatherings across the borough where the socialist lawmaker was born and raised.

The crowd filling the dimly-lit German style tavern’s wooden benches was predominantly white, with a sprinkling of diversity, mostly trendy-looking millenials but including a small gray-haired delegation from Mr. Sanders’ Brooklyn. An hour before the televised address was scheduled to start, the expansive space burbled with the sound of support for the rival of former New York Sen. Hillary Clinton and for his unvarnished populist platform.

“It just seems like he’s a real person in politics, and everyone else feels like a politician. I just think like I’ve been waiting for this, a cause to be involved in and someone to take a real honest approach to the problems plaguing this country and holding the top one percent accountable,” said Sean Millroy, a 23-year-old aspiring songwriter living in Crown Heights, who last voted for ex-New Mexico Gov. Gary Johnson on the Libertarian line for president in 2012.

Sitting next to him was another Crown Heights resident, 20-year-old Anwar Munroe, one of a handful of African-Americans in attendance.

“This is someone who could change the country for people like me,” he told the Observer, raising concerns about both his future job prospects after graduating from Carnegie Mellon University and about the nation’s growing ethnic tensions. “He talks about things a lot like youth unemployment, and especially, he talks about the race relations. And when I hear him talk about the economic issues, I think it’s important to rally behind him.”

Both men, like most of the attendees the Observer spoke to, reported having little or no previous involvement in political campaigns or activism, and described learning about Mr. Sanders relatively recently from social media and online news sources. In contrast, Alan Podber, a 65-year-old social worker from Sheepshead Bay, said his brother-in-law had played stickball with the future senator as a boy and recalled journeying to an event in Vermont last year to urge Mr. Sanders, an independent running in the Democratic primary, to take a shot at the White House.

“I’ve been supporting Bernie for many years. I’ve been looking around for most of my life for candidates who I can really trust and believe in, and Bernie is that person,” he said. “I feel that in order to survive as a nation and as a people, we need Bernie Sanders to be president of the United States.”

The livestream of Mr. Sanders’ speech was projected on a broad screen at the front of the room. In his gruff Flatbush inflections, the candidate boasted that this was the largest and earliest interconnected online event a presidential campaign ever held.

“Tonight really is an historic night and all of us are making history,” he said from a rally in Washington, D.C., claiming that more than 100,000 people in more than 3,500 locations were watching. “Why are we seeing spontaneous uprisings, if you like, and meetings in cities and towns all over this country? And here is my answer: my answer is that the American people are saying loudly and clearly ‘enough is enough.'”

The speech hit most of the leftist legislator’s usual talking points: income inequality, child poverty, free college education, a $15 an hour minimum wage. It also featured references to the case of Sandra Bland, a black Illinois woman forcefully arrested and jailed in Texas earlier this month for failing to signal a lane change, and who subsequently died in her cell in what medical experts have ruled a suicide—references that reflected an apparent effort by the politician, who represents an overwhelmingly white state, to tap into the burgeoning Black Lives Matter movement.

“We have got to combat institutional racism in the United States,” he said, to cheers and shrieks in the audience.

The video feed suffered a brief hiccup around the five minute mark, stopping and buffering for a moment, and triggered an outburst of concerned chatter. But the rest of the speech was broken only by applause from the audience at the beer hall.

After the speech ended, one of the event organizers, John Wasserman—founder of the Brooklyn College Democrats at Mr. Sanders’ original alma mater—took the floor.

“He was born and raised here. He studied at James Madison High School, he was on the track team. And he is going to run the distance in this campaign with help from all of you!” he shouted. 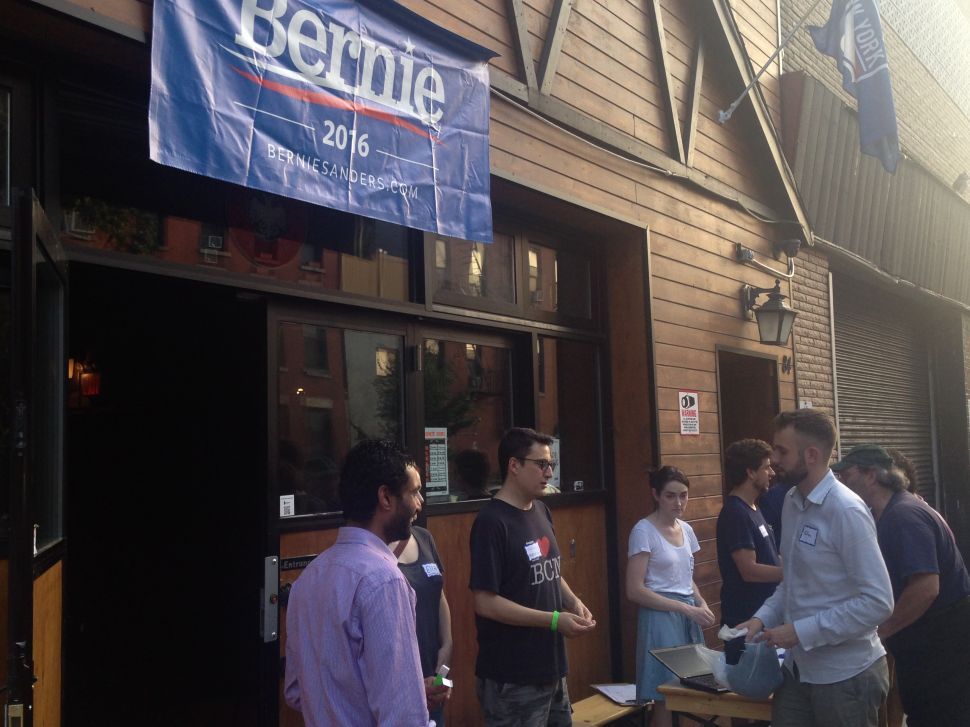