Days after the NYPD raised a surveillance tower in Tompkins Square Park, an unlikely commentator took to Twitter to express its discontent: the tower itself.

“PRO TIP: If you want to do anything illegal in NYC and get away with it wear salmon shorts and Wayfarers,” tweeted the tower’s unidentified correspondent Sunday evening.

348 followers, the tower tweets satirical news and commentary from the handle @NYPDTWEETTOWER, often alluding to “Officer Tubbs” and asking followers to post their #tweettowerselfies.

TIP: ITS OK TO DRINK IN #TOMPKINSSQUAREPARK SO LONG AS SOMEONE SERVES YOU FROM A SILVER TRAY. #EASTVILLAGE

PRO TIP: IF YOU WANT TO DO ANYTHING ILLEGAL IN NYC AND GET AWAY WITH IT WEAR SALMON SHORTS AND WAYFARERS.

#ASKTWEET WE'LL BE HERE UNTIL THE PRECINCT REALIZES A KNEE JERK REACTION IS NOT A STRATEGY.

Since the tower was brought to the park on July 21, many residents have expressed disdain for the structure’s “Orwellian” surveillance, and a petition advocating for its removal has amassed over 600 signatures. 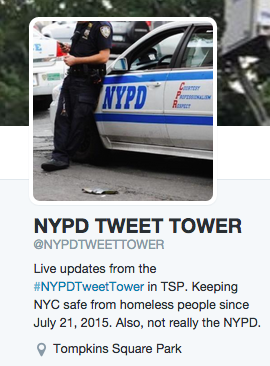