A green blob on the radar indicates that rain is imminent on this Saturday night at the Surf Lodge in Montauk, N.Y., where an outdoor performance by California-throwback band The Allah-Las is scheduled to take place. Despite the impending wet weather, Lodge co-owner Jayma Cardoso doesn’t seem phased. “We’ll make it work,” she says in her thick Brazilian accent while surrounded by an army of staff members in matching tropical uniforms. “If we have to, we’ll move everything inside.”

Formerly a simple Irish dive-bar in Montauk, the Surf Lodge has been transformed into one of the hippest spots in the Hamptons.

Perhaps the reason why Ms. Cardoso isn’t stressing a little rain is because, since opening in 2008, The Surf Lodge—part hotel, part restaurant, part music venue—is enjoying its spot as a cornerstone of New York’s nightlife scene. Formerly just a simple Irish dive-bar in Montauk, it has been transformed into one of the hippest spots in the Hamptons, in-part thanks to a now-legendary outdoor summer concert series that takes place on a deck overlooking the immense Fort Pond. (The Atlantic Ocean sits a short drive away.) This season’s music lineup—which began in May and stretches until Labor Day—reads like a who’s who of the hot and the buzzy, ranging from alternative pop “it” girl Ryn Weaver and longtime rockers The Flaming Lips, to radio favorite Tove Lo and a DJ set by Solange Knowles to boot. Since it’s inception in 2008, the Surf Lodge’s music series immediately set it apart from the crowded nightlife scene in the Hamptons—which was all part of the plan from day one.

“When we first opened in 2008, we were wondering how to give people a reason to come all the way out to Montauk,” explains Ms. Cardoso, the brains behind the concert series, and one of the forces who made Manhattan’s Lavo a must-visit destination. “The more we thought how to get people to the Surf Lodge, the only thing we came back to was to have live music that fits the vibe here.” True to her vision, the crowds that the Lodge lures varies as much as its lineup. Not catering to a typical Hamptons demographic, it’s a favorite of everyone from fishermen and local surfers, to Brooklyn hipsters and bachelorette parties. As such, the Lodge’s team strayed from the idea to feature the little-known acts that largely make up a hotel or restaurant’s music scene, and instead took cues from the charts and Ms. Cardoso’s iPod—a novel, yet expensive idea. Notes Ms. Cardoso, “There’s a little bit of all worlds here and I think that also gives it a fun energy.”

On this particular night, the property is chock full of that bubbly energy.

On the deck while the Allah-Las’ equipment sit waiting for a 7 p.m. set time, those lucky enough to get a reservation at the Lodge’s well-reviewed restaurant just a few steps away are gnawing on Lobster Rolls and Tuna Tartare. Across the yard, the actress Rosario Dawson is hawking some items from her sustainable clothing line (one of the many pop-up shops that will call the Lodge home this summer). A few more steps away lie a cluster of crowded outdoor couches situated to provide Instagram-worthy views of the and sunset. These are the same couches, it should be noted, where Taylor Swift recently sprawled out for a photoshoot and where Leonardo DiCaprio and girlfriend Kelly Rohrbach were spotted getting cozy just last month. (New York Post headline: “Leo and his New Girlfriend take their Makeout to Montauk”.)

“People never used to come to Montauk for the nightlife,” says Ms. Cardoso, where just a few feet away a line of people are waiting outside in hopes of making it through the door. “The thing I love about the concerts is that people who want to hear the music but can’t afford a drink will bring their own stuff. Why shouldn’t the fishermen enjoy the music? A lot of times they’ll come on paddle-boards and paddle here.” If there’s a show that night, Ms. Cardoso instructs the doormen to admit only the biggest fans for the small crowd, which can sometimes get too relaxed. “There’s nothing worse—nothing worse—than seeing someone play on stage while people are talking. You’ll see me flying through crowds telling people to shush or leave.”

It’s that atmosphere that makes some artists second-guess getting booked at the Lodge upon arrival, largely thanks to its no-frills performance space—otherwise known as The Deck.

“I alway watch the band, because they come here and are like, ‘Where’s the stage? Who signed off on this?!’ ” jokes Ms. Cardoso, who once had to negotiate with Willie Nelson’s team for an hour after the singer balked after realizing he had to walk through the crowd to get from the tour bus to his set-up.

However, once performers get rocking and feed off the crowd, they tend to buy into the whole idea and even return for repeat visits. (Montauk resident Jimmy Buffett has become a familiar face, even performing alongside Mr. Nelson on one occasion.) “We had Patti Smith here a couple years ago and her manager Marty was like, ‘Jayma, this is going to be a bad idea.’ But we really wanted her and it wound up being incredible.” Other acts, meanwhile, go full throttle despite the small space, such as the Flaming Lips who, a day after performing for an audience of 40,000 in New Jersey, brought their entire stadium set-up to the Lodge’s tiny deck, complete with massive balloons that spelt out “Fuck yeah, Montauk.” Says Ms. Cardoso, “When it comes to booking acts we look at who’s really great, and who’s on the cusp of becoming big that we can afford now.”

As a steady mist falls on Montauk just as the Allah-Las are about to take the stage, the Lodge staff thinks quick and four workers hoist up a giant tarp over the band to protect their instruments, holding it up—by hand—for the duration of their hour-long set. The surf-rockers—who sound like mix between The Ventures and The Doors—flew into Newark from Los Angeles and drove 140 miles to Montauk, and are wisely making a vacation out of the gig, considering acts are given a hotel/dressing room hybrid for the night. (D’Angelico Guitars is co-sponsoring the Google Playroom and is gifting many of The Surf Lodge’s visiting artists with gorgeous new guitars.)

After the show, Allah-Las bass player Spencer Dunham is enjoying the fact that with their set out of the way by 8:30 p.m., he can now spend a full Saturday night in the Hamptons. “This is a part of New York I’ve never been to,” explains Mr. Dunham in between puffs of a cigarette. “It was raining today, but it seems like an incredibly beautiful place. We’ve done outside shows before, but it’s not often you find a cool spot like this.” And what about the Lodge does Mr. Dunham like the most so far? “The great food and beautiful women, for starters.”

Since it’s inception in 2008, the Surf Lodge’s music series immediately set it apart from the crowded nightlife scene in the Hamptons.

Back at the deck, a DJ has taken over and instead of blasting the latest EDM hit, the sounds of The Turtles’ 1969 track “You Showed Me” are blaring out of the speakers.

“We give the DJs a lot of guidelines,” says Ms. Cardoso, who believes it’s the power of small details that dictates one’s experience at the Lodge, from the rooms (best described as shabby chic) to a given DJ’s playlist. “No house music, no rap, no Top 40… Some people love that and others aren’t sure about it. If you’re looking for a raging party feel and you go to the DJ and ask for Avicii, you won’t be able to get it. The atmosphere is fun, but not on the verge of going crazy.”

As midnight approaches, the evening’s earlier mist has turned into a downpour and the Lodge’s festivities have moved entirely indoors. Still, the party keeps going and Ms. Cardoso now shifts her focus to the overnight hours, which is when clean-up takes place and the space slowly transforms from a nighttime hotspot to a daytime chill zone. “People don’t really stay here because the rooms are great,” says Ms. Cardoso, sitting on those same couches on which the likes of Mr. DiCaprio and Ms. Swift sat before her. “They stay here for an entire weekend. This is a whole experience built in.” 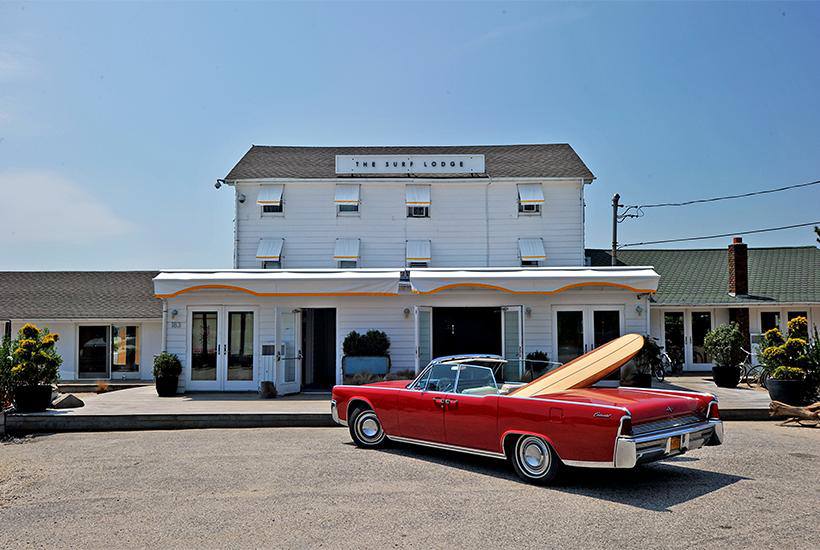