It is nice to be an idealist in college. Subjects like history and economics will always be useful, particularly if one aspires to a position of responsibility.

Unfortunately, it appears that Mayor de Blasio skipped those classes, and instead focused on demagoguery, grievance politics and victimization. How else to explain his choice of words in opposing Uber? “Uber is for rich people.”

That the mayor would oppose the revolutionary service was no surprise: it would be hard for him to stand up to the yellow-cab owners who had contributed $550,000 to his campaign.

But his grasping for a rationale to justify his opposition revealed a lack of intellectual curiosity that is particularly disturbing.

We know why he didn’t understand the consumer appeal of the service: just as he was shocked to find long delays on the subway when he finally ventured below ground recently, the mayor has cocooned himself in the trappings of his office, and has quickly forgotten what regular New Yorkers face every day. Never once, it appears, did Mayor de Blasio ask his advisors, “Why are so many people choosing to become Uber drivers? Why are so many New Yorkers choosing to ride in Uber vehicles?”

Mr. de Blasio achieved office by spouting the rhetoric of divisiveness and decrying a “tale of two cities.” While that may have served him well as a candidate, as mayor he has a wholly different set of responsibilities.

Having left New York 19 times during his first 19 months in office, it is not unreasonable to infer that he has little interest in actually managing the city.

Late night bull sessions in college, and youthful jaunts to Cuba and Sandinista-controlled Nicaragua are all worthwhile learning experiences. But a mayor of 8 million people—particularly one who apparently has never worked in the private sector—has a responsibility to learn how jobs are created. (We dare not say wealth creation.)

Government has a legitimate role to keep people safe and healthy, build and maintain the city’s infrastructure, and provide essential services. But so does the private sector; and it is not simply to serve as the mayor’s ATM machine.

That Mr. de Blasio has a different, grander vision is his prerogative. But his first duty is to make sure the city doesn’t deteriorate on his watch; and many metrics are pointing downward.

It is time for Mr. de Blasio to take a step back, breathe deeply and recognize that he has to expand his education. He seems to be operating from a worldview that is informed by government dominance, consumed by an antipathy toward democratic capitalism, and driven by pessimism. That will not help the people of New York. It will not help the spirit of New York.

Mr. Mayor, there’s a reason Uber pulled your pants down in this “who will blink first” fight. There’s a reason Gov. Andrew Cuomo and Council Speaker Melissa Mark-Viverito and many other Democrats publicly broke ranks with you on Uber. The city is looking for leadership. It is time for keener observation, more curiosity and less ideology. 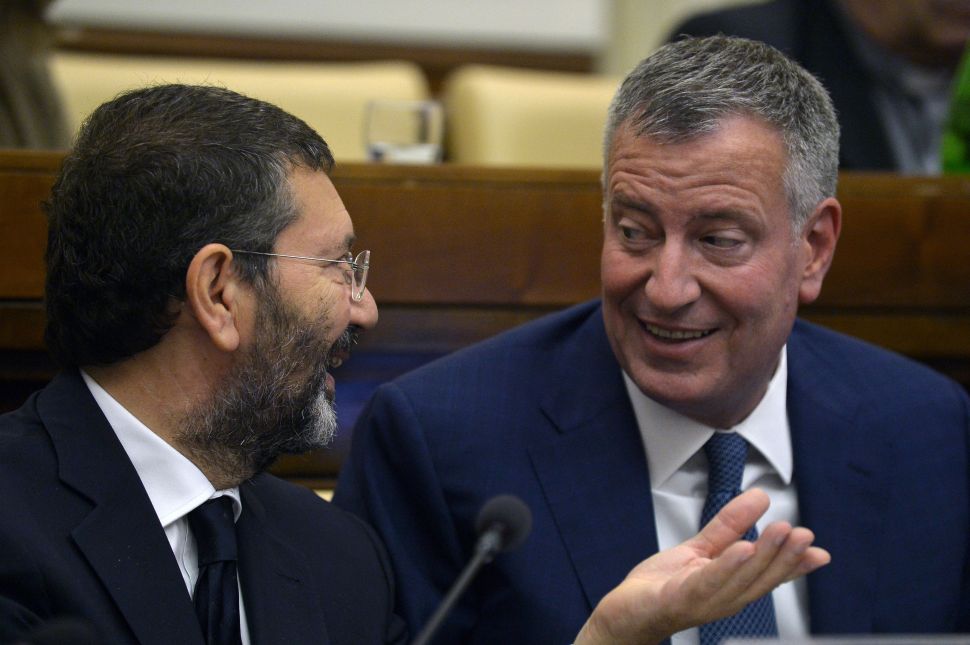