In the 19 seasons of “Bel  Canto  at  Caramoor,” the annual festival of concert performances at a sylvan country estate in Katonah, N.Y., the artistic mission has remained unchanged. It is rooted in Italian opera of the first half of the 19th century, in the vocally virtuosic bel canto style after which the event is named. And so the sudden and radical departure from that tradition this summer—a leap forward of more than a century to present the Francis Poulenc opera Dialogues des Carmélites—sounded ominous.

Happily, though, the venture didn’t end in the sort of catastrophe so many of those melodramatic Italian operas feature. In fact, Saturday night’s Carmélites ranked with the festival’s finest recent presentations, such as Semiramide and Les vêpres siciliennes, as not only superb examples of the meticulously-prepared one-off concert, but highlights of the New York musical season as well.

Poulenc’s 1957 opera, one of only a handful since Puccini’s 1926 Turandot to gain a firm place in the international repertoire, is based (via an intermediary play and novel) on a historical incident during the French Revolution. In 1794, a group of 16 nuns from a Carmelite convent in Compiègne were condemned as traitors and sent to the guillotine. The opera invents the character of Blanche de la Force, a timid young noblewoman who has joined the convent as a retreat from the stresses of the world. Her mentor is the elderly prioress Madame de Croissy, who, soon after Blanche’s admission to the novitiate, dies in horrible pain.

When revolutionary officials order the convent to disband, the fanatical Mére Marie convinces the sisters to take a vow of martyrdom. The terrified Sister Blanche flees from the convent, but, on the day of execution, she reappears and joins the other nuns in their calm march to the scaffold.

The libretto is remarkable for a complete lack of any romantic or sexual content, instead concentrating on such theological questions of the nature of prayer and the choice of martyrdom. Poulenc sets these pensive “dialogues” to curiously sensuous music, suggesting an almost physical ecstasy in the relationship between religious and Creator.

For the harrowing finale of the work, in which the sisters march calmly to their doom, Poulenc punctuates a driving choral setting of the hymn “Salve regina” with the seemingly random “whoosh” of the falling blade of the guillotine. As the rich harmonies thin to only a few voices, that guillotine noise becomes ever more appalling with familiarity, so that when Sister Blanche finally sings her final lines of the hymn, the sense of horrified anticipation is almost unbearably nerve-wracking.

The director of opera for Caramoor and conductor of the performance, Will Crutchfield, wisely departed from the festival’s usual concert format. The opera was staged quite fully, omitting only changes of scenery, by Victoria Crutchfield, in a narrow space across the front of the stage of Caramoor’s Venetian Theater, with Mr. Crutchfield leading the orchestra farther back. Simple modern clothes emphasized the timeless quality of the piece, and matching black evening dresses and shawls, accessorized with wimples, suggested the nuns’ habits.

This approach admirably focused the audience’s attention on the essentially static and internal nature of the drama, and Ms. Crutchfield choreographed the final scene exquisitely, with each of the doomed sisters proceeding at a slightly different pace. The only misstep, I felt, was the tableau at the very end of the piece, when the director had the revolutionary mob glare out at the audience menacingly. That bit would be more at home in Les Miz.

One of the central skills of bel canto conducting, the ability to vary the tempo according to the singer’s expression, served Mr. Crutchfield well here. After a slightly stodgy start with a talky exposition scene between Blanche’s father and brother, he led the Orchestra of St. Luke’s in a relaxed, fluid reading. The many “dialogues” had an easy conversational flow, and the intricate choral prayers sounded meticulously precise without a hint of pedantic stiffness.

One practical reason Carmélites holds the stage so well is that it offers five splendid roles for female singers of various ranges and abilities. For these parts Mr. Crutchfield assembled one of his finest casts ever. Towering above even so superlative a group was the veteran dramatic soprano Deborah Polaski as the tormented Madame de Croissy, conveying the character’s mortal agony with an outpouring of rich dark tone. Her death scene had a simplicity and power that reminded me of Vanessa Redgrave at her peak.

Jennifer Check was offbeat casting as Blanche. The part is generally assigned to a wispier, more elusive sounding voice suggestive of the character’s fragility, but Ms. Check’s rich spinto soprano conveyed instead a hysterical, almost violent quality. On paper, Hei-Kyung Hong’s slim, veiled tone would make her seem a more plausible Blanche, but she sang the soaring lines of Madame Lidoine’s majestic arias with the glowing passion she brings to her Puccini heroines at the Met.

In the terrifying mezzo part of Mére Marie (the music leaps repeatedly to high B-flat) Jennifer Larmore began sounding a bit rusty. But as the role progressed, her tone warmed up and gained impact. No, she is not the huge-voiced Amneris type Poulenc asked for in the part, but she really dug into the French text, spitting out her defiance of the revolutionary commissioners who order the closing of the convent.

A less familiar name was Alisa Jordheim, who sang the role of the cheerfully mystical Sister Constance. This part can be described as “chirpy,” and often audiences will agree with Sister Blanche when she snaps, “Are you not afraid that God will grow tired of your good humor?” Ms. Jordheim’s sweet soprano deftly avoided that trap, singing with lively energy and pinpoint high C’s.

The success of this Carmélites seems to open a whole new chapter for Bel Canto at Caramoor. Not that I’d want the festival to abandon the romantic era, but I can think of so many operas done sloppily or not at all that would blossom under Maestro Crutchfield’s nurturing hands. And if anyone asks, I’ll be glad to offer a list. 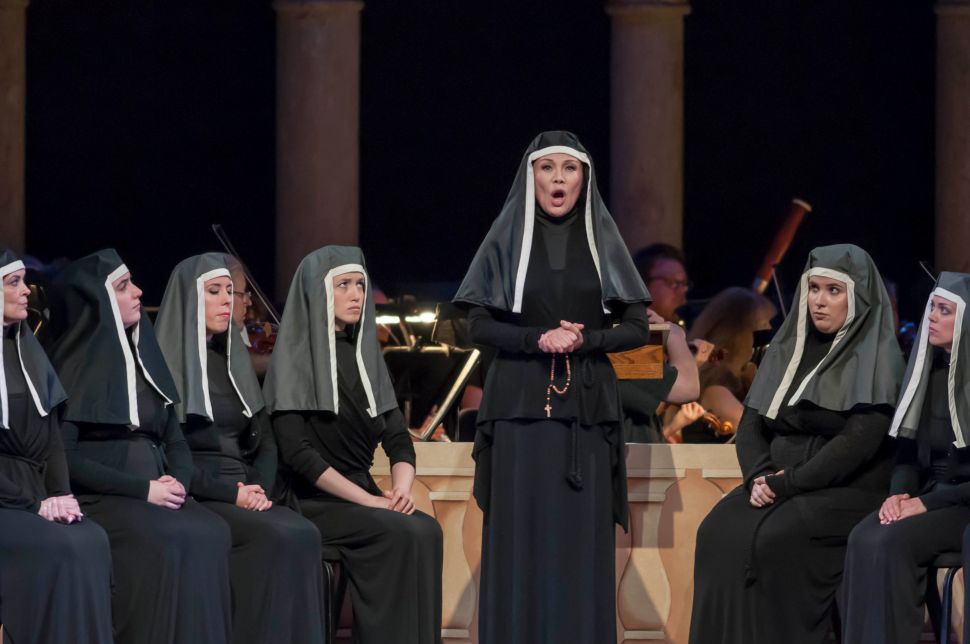