Shoshana Roberts is hollering back.

Ms. Roberts, who became a viral sensation last Fall when she appeared in the online clip “Ten Hours of Walking Through NYC as a Woman,” has filed a lawsuit against Rob Bliss, the director of the clip, and Hollaback!, the advocacy group behind the video which campaigns to end street harassment. According to the suit, the pair—along with co-defendants Google, YouTube and TGI Friday’s—unrightfully benefitted from her “creative content, performance, image, likeness and persona for the purpose of advertising or trade without her prior consent.”

As first reported by the Daily News, Ms. Roberts is seeking $500,000 for what she perceives as a breach of her civil rights.

In the two-minute video, Ms. Roberts is seen being catcalled by over 100 men over the span of ten hours, which was then edited down. The aim of the project, which was first conceived by Hollaback!, was to raise awareness to everyday sexual harassment. The clip, which was posted by the channel “Street HarassementVideo” has received over 40 million hits on YouTube.

Ms. Roberts, who reportedly only received $200 for answering the Craigslist casting ad, felt very strongly about making the clip because she had previously been the target of sexual assault. Additionally, Ms. Roberts has claimed to have been the victim of numerous rape threats since the clip was released on October 28, 2014. 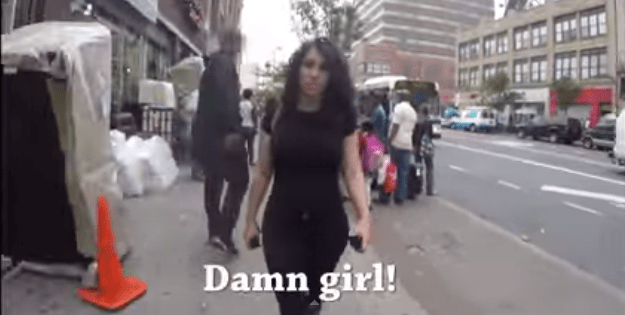