It looks like Michael Bloomberg wasn’t the only one making big real estate moves this week.

A few days after the former mayor purchased a $26 million London townhouse, his ex-wife Susan Brown Bloomberg found a buyer for her penthouse duplex at DDG’s 41 Bond Street. A Halstead spokesperson has confirmed that a contract has been signed on the apartment, just over a month after Ms. Brown Bloomberg put her home on the market for $11.7 million.

Ms. Brown Bloomberg and her billionaire ex-husband have maintained a close friendship since they divorced in 1993, and he reportedly helped her with a $500,000 bridge loan when she purchased the Noho condo for $8.2 million in 2011.

Something they obviously didn’t agree on, however, is design. While Mr. Bloomberg is arch traditionalist, known for decorating his townhouses in exceedingly classic fashion, Ms. Bloomberg chose some rather… eclectic décor for the dramatic 2,700 square foot apartment, including animal print chaises, Persian rugs, and quite the assortment of chandeliers. Perhaps her bold selections—i.e. large-scale dog photos, cat figurines—just stands out against the sleek, modern look of 41 Bond, but stand out they do.

Of course, it didn’t stop a buyer from nibbling promptly. Arlene Weidberg at Halstead has the listing for the duplex, which includes 1,500 square feet of private outdoor space and four-exposure views, as well as Austrian oak wood floors, floor-to-ceiling windows, and sliding glass doors. There is also a wet bar and a custom 3-sided fireplace in the great room.

Other highlights of the two-bedroom, 2.5-bath penthouse include a second custom gas fireplace upstairs and a gourmet open chef’s kitchen. The master suite has a “windowed spa-like Carrera marble bath with soaking tub,” from which one can admire the large photo of a rhinoceros that is currently hanging on the wall.

It is yet to be determined where Ms. Brown Bloomberg will go next, as she sold her previous downtown apartment at trendy One Kenmare Square before she moved into 41 Bond. Maybe she’s buying in London, too? 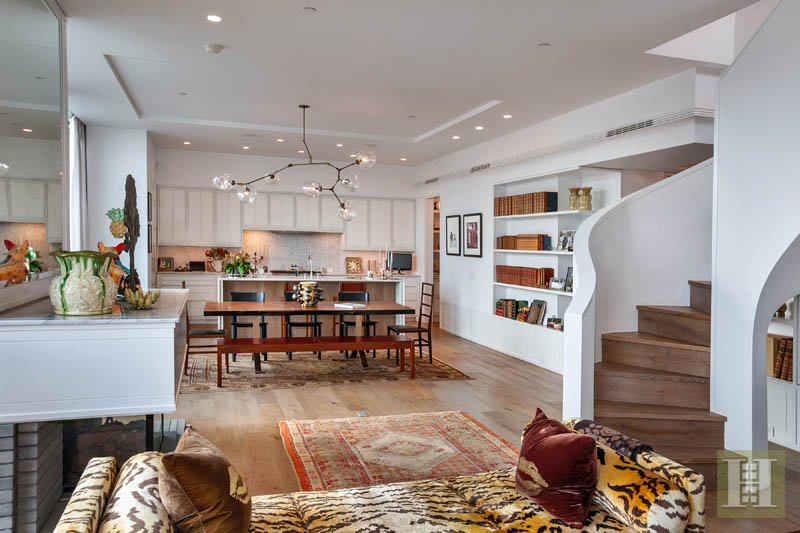