New York City has made tremendous progress over the past 20 years. Crime remains at record lows, population and visitors at record highs, and whole swaths of the city once bereft of cultural opportunities or even a safe place to live are now blossoming anew for businesses and residents.

And yet … look around. There are unmistakable signs that New York City is creeping toward the bad old days. A series of photographs in The New York Post this past week chronicled what many of us have witnessed all too frequently: a dystopian scene of the homeless ranting at passers-by, sleeping in doorways and occasionally attacking the innocent.

The first photograph showed six homeless men sleeping in Tompkins Square Park. The second, shot the very same day, captured a shirtless man urinating in the middle of Broadway at 83rd Street. The man, identified as John Tucker, 49, a longtime habitué of the Upper West Side, was later taken to two different hospitals for mental evaluation and subsequently released. The next day he was again photographed urinating in the middle of Ninth Avenue at 47th Street. The next in this series of Dickensian despair will certainly be the corridors of our shameful Penn Station or Port Authority, where dozens of homeless men and women are permanently encamped.

This must end. For two decades, New Yorkers worked too hard, invested too much, and sacrificed too long to allow a return to the filth and fear that dominated this city for far too long. There are three intertwining forces that must be addressed.

First, we need a compassionate and effective policy to deal with the homeless. The city’s Department of Homeless Services serves approximately 54,000 people in its shelters every night, an increase of some 70 percent since 2002 when Michael Bloomberg took office. It has continued to rise since Bill de Blasio became mayor. One reason for the dramatic increase in the shelter population was that during the Bloomberg Administration the state discontinued a program where it paid apartment rents for people leaving homeless shelters—forcing many people back into the shelter system.

The shelter population includes some 23,000 children, 20,000 adults in families, and 11,000 single adults. It is also estimated that there are approximately 3,000 homeless people not in shelters. Advocates for the homeless disagree with city estimates that the number of homeless people on the streets has decreased by 5 percent over the last year.

It is not that city leaders are not trying to deal with the problem. The Department of Homeless Services budget exceeds $1 billion annually—more than the city pays for transportation, parks, libraries, cultural affairs, or affordable housing. Mr. de Blasio’s most recent budget included a $100 million increase in spending on homeless services. And to his credit, following the latest incidents, Mr. de Blasio did not echo the mantra of some advocates and say the problem is simply one of too few affordable housing units. He did say, however, that his wife, Chirlane McCray, would be presenting a comprehensive plan soon. If this is where leadership on this important issue is to come from in Mr. de Blasio’s administration, we welcome it and look forward to her recommendations.

The second dimension of the problem is a bit dicier—at least for some people, though not for us. People who degrade the quality of life by urinating or defecating in the street, by brandishing broken bottles at people, or who camp out in front of storefronts screaming at shoppers—as Mr. Tucker has recently and regularly—need to be arrested, not mollycoddled. The system is clearly failing Mr. Tucker: two different hospitals examined and released him over the weekend. Involuntary commitment is allowed under New York law. He is both a danger to himself, and, as exhibited by his brandishing a broken bottle, a danger to others. Understandably, neither Roosevelt nor St. Lukes’ hospital is commenting. But his presence on the street is neither quaint nor an expression of our liberal tolerance. We need to be at least as compassionate toward the innocent victim who will surely be slashed by a fellow like Mr. Tucker as we are toward Mr. Tucker himself. It is a problem waiting to happen.

Both the Tompkins Square sleepers—we don’t yet want to call them squatters, though that is part of the sad history of the long-troubled, now beautifully restored park—and Mr. Tucker are emblematic of something much more troubling: a fundamental misunderstanding of the broken windows strategy. Allowing homeless people to take over even a corner of the park invites more problems. For decades, Tompkins Square Park was a dangerous haven for every imaginable crime, to the point where it was known as “Needle Park.” Those days are hurtling back to us with alarming speed. Even commenters on “I miss the good old days” blog East Village Grieve find themselves agreeing with the Post and detailing a tragic scene: “There are junkies, most of whom are men, passed out, sleeping, without shoes, often waking up and screaming. Some of them talk to themselves and have incoherent conversations.” It may not be violent criminal behavior at first, but the cancer of lawlessness will metastasize. It will get worse.

The police need to remove the homeless every night. Yes, we know shelters are not the safest or most accommodating of places. (That city regulation that requires every homeless male to register on East 30th Street in Manhattan—irrespective of where they are—speaks volumes about the bureaucracy and illogic in a broken system.) But police officers should be accompanied on their twilight rounds by Department of Homeless Services advocacy teams who can offer a proverbial carrot alongside the police stick.

The third, and most distressing aspect of the problem is the wrong-headedness of City Council Speaker Melissa Mark-Viverito. In response to the Tompkins Square Park and Upper West Side incidents, Ms. Mark-Viverito said Sunday that she would not back down from her plan to decriminalize quality-of-life offenses—including public urination and trespassing in the park after dark. How she could want to further tie the hands of police officers—whose jobs are dangerous, difficult, and often thankless—by taking away the legal tools they need to protect all New Yorkers (including those in real danger of hurting themselves) is simply staggering.

Tompkins Square Park has been an accurate barometer of where the city is headed. Known for decades as “Needle Park,” its disarray and lawlessness reflected a dysfunctional, ungovernable city. The restoration of its beauty over the last 20 years has heralded an era where residents and a vibrant collection of small businesses near the park—is there a single better food in all of New York City than the jalapeno cheddar cream cheese at Tompkins Square Bagels?—have thrived. Let’s not allow that progress to slip through our fingers.

This week, members of the Observer editorial board visited the park. It was a gorgeous summer day and workers were sweeping up, dogs were frolicking, a small group was practicing Falun Gong, men were playing chess. And at least six people were sleeping on cardboard boxes on the lawn. One park worker, Nelsy, told the Observer that Police Commissioner Bill Bratton personally visited the park on Monday. Perhaps he was inspired by the Post story to take a look and if so, we applaud his leadership. But it will take more than a visit. The city needs a strategy and the determination to stick with it.

It’s time to take back Tompkins Square Park and beyond. Before it’s too late. 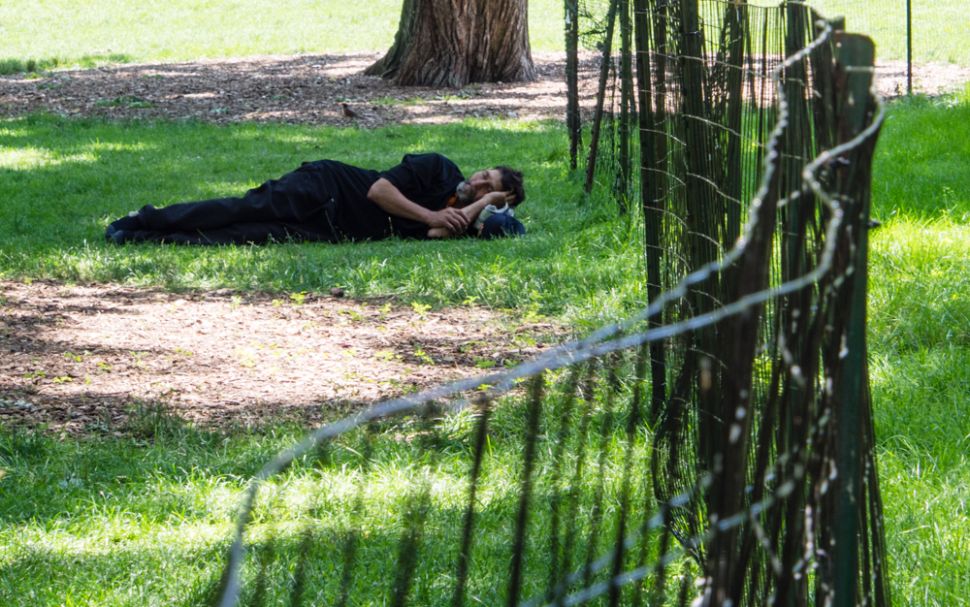