In a sweeping economics speech aimed at bolstering her progressive credentials, Hillary Clinton ripped into Republicans for driving income inequality and called for a rewriting of the tax code to benefit the middle class.

Ms. Clinton, speaking this morning at The New School in Manhattan, said the “defining economic challenge of our time” is to boost the incomes for “hardworking Americans so they can afford a middle class life.”

“The evidence is in. Inequality is a drag on our economy,” Ms. Clinton declared, calling on corporations to share more of their profits with employees.

Ms. Clinton, the former secretary of state, is the overwhelming front-runner in the race for the Democratic nomination for president. But she has faced increasing pressure from Vermont Sen. Bernie Sanders, a socialist whose fiery populism appears to be resonating with voters in Iowa and New Hampshire, two key early voting states.

Illustrating this challenge, one man in the small auditorium stood up at one point and started shouting at Ms. Clinton, asking if she would “restore Glass-Steagall.” The law, repealed by her husband, former President Bill Clinton, once enforced a separation between commercial and investment banking. Clinton supporters tried to drown him out by applauding her and he was eventually escorted away.

In her speech today, like in her campaign kickoff address last month, Ms. Clinton sought to show that she is the Democrat that progressives in her party should be most excited about. She praised President Obama for “saving” the auto industry and implementing the Affordable Care Act, portraying herself as the liberal who should be trusted to cement–and improve upon–the Obama presidency.

Despite her long ties to Wall Street, she repeatedly attacked hedge funds, “shadow” bankers and high-frequency traders–those who she claimed make soaring profits without creating physicals goods or jobs. She said she sounded the alarm early on the danger of trading derivatives, complex financial instruments that some say drove the 2008 financial collapse–and promised to unveil a plan to reform capital gains taxes.

“Too many of our major financial institutions are still too complex and too risky. And the problems are not limited to the big banks that get all the headlines,” she said.

“And while institutions have paid large fines and in some cases admitted guilt, too often it has seemed that the human beings responsible get off with limited consequences–or none at all, even when they’ve already pocketed the gains,” she continued, calling for a trust fund to hold money the government recovers from law-breaking individuals and corporations . “This is wrong and on my watch this will change.”

The three leading contenders for the Republican presidential nomination–former Florida Gov. Jeb Bush, Florida Sen. Marco Rubio and Wisconsin Gov. Scott Walker–were all the targets of Ms. Clinton’s ire. She slammed Mr. Walker, who is kicking off his campaign today, for making his name “stomping on workers’ rights” and called for a revival of trade unions.

She said Mr. Rubio, who recently outlined his own tax reform policy, crafted a “budget-busting giveaway to the super-wealthy.” Like other Democrats, she jumped on Mr. Bush–who claimed his quote was taken out of context–for saying that Americans should work longer hours.

Ms. Clinton’s speech was still relatively light on detail, though she promised to fill out her vision in the coming weeks and months. She alluded to her history-making potential as the first woman president, and said elected officials needed to focus on issues like paid sick and child care leave. She said the “gig economy”–she did not name-drop Uber, Lyft and AirBnB, thought it was clear she was referring to those companies–was exciting but raised “hard questions” about workplace protections.

On free trade, she clung to a careful middle ground, unlike her Democrat rivals. Mr. Sanders has led the charge against a centerpiece of Mr. Obama’s economic agenda, the Trans-Pacific Partnership, attacking it as another free-trade agreement that will erode blue collar jobs in America. Former President Clinton, like Ms. Clinton, championed free-trade agreements–but Ms. Clinton said today the U.S. needs to set a “high bar” for agreements to assess if they raise wages and create jobs. 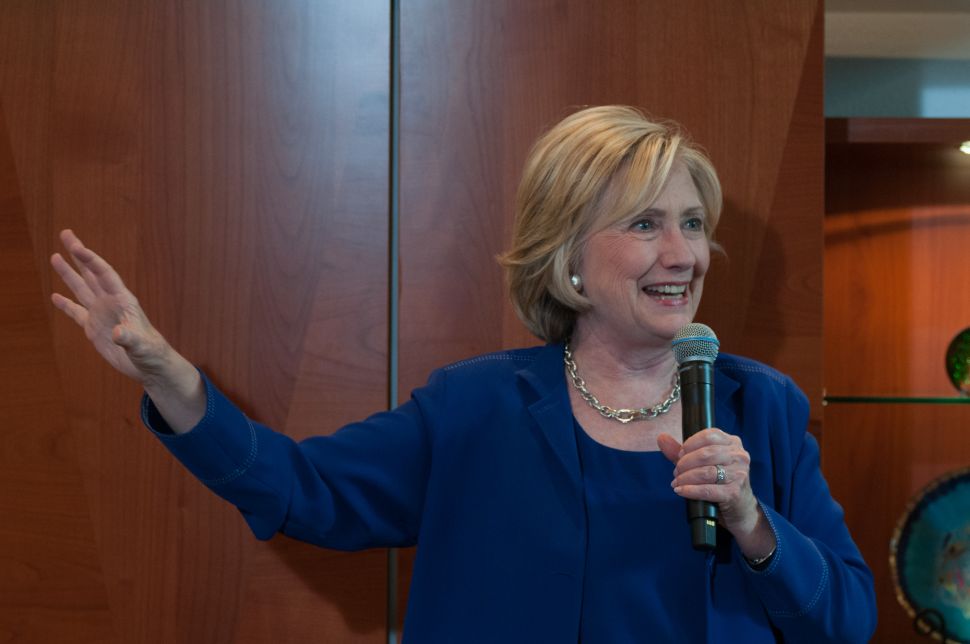