From a political standpoint, the appearance together by the two Democrats underscored the establishment party heft Gottheimer will likely have at his back in the form of a newly elected, popular county executive when he runs for Congress next year against incumbent U.S. Rep. Scott Garrett (R-5).

JerseyOn is a statewide nonprofit that aims to close the gap in Internet access that exists among students with varying income levels in New Jersey. Each school enrolled in the program will be able to identify families in need to receive a wireless-enabled hotspot that connects to Sprint Wireless 4G LTE network.

Today, Tedesco announced that JerseyOn is receiving a $50,000 grant from the County Executive Grant Program that will jumpstart the program in Bergen County. The grant will provide the first 531 devices at no cost for the first qualifying families.

“Internet access is a vital component of a 21st century education and students who don’t have access at home are at a significant disadvantage,” Tedesco said. “This grant will help us close the gap.”

For Gottheimer—who previously worked for both the FCC and as a Clinton speechwriter—closing the gap in Internet access is a critical one in New Jersey.

“I started getting involved in the digital divide about five or six years ago,” Gottheimer told PolitickerNJ. “I realized there were a lot of people who just couldn’t afford to be connected and that puts them at a real disadvantage in this digital economy. With JerseyOn and this partnership, we can make significant strides to help remedy that.”

For Tedesco, the chance to provide this grant to JerseyOn demonstrates his administration’s commitment to public/private partnerships.

“I know Josh through his work with my previous campaign,” Tedesco said of Gottheimer. “He knew that education and public/private partnerships were a priority for me. When he explained the program I knew it was a great way to use the grant money and show my commitment to the issues I ran on.”

“The government can be a part of a solution,” he said. “Partnering with private institutions can provide innovative solutions to problems.”

For now, each device comes with a one-time cost of $94 for four years of Internet connectivity. JerseyOn is seeking additional funding for costs after the grant funding that will provide access at no cost. 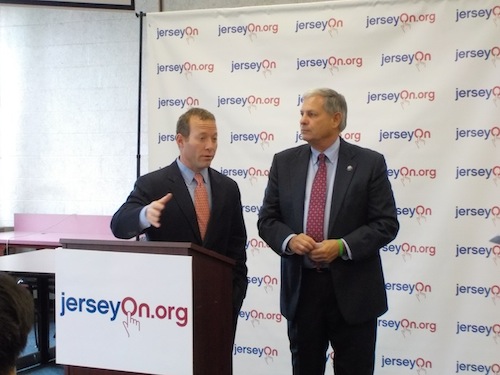