At approximately 9:55 p.m on June 10, 2007, a scream rang throughout my house. It was followed by what I would call a single curse word, if it was not closer to an amalgam of every curse word strung together to create a dissonant sound of pure anger, surprise, and frustration.

It was my father, reacting to what he thought was our television losing power in the waning seconds of The Sopranos‘ final episode. A second later, our phone rang. Then it rang again. It was friends and family, desperately reaching out for a play-by-play of what they had missed in the last moments of ‘Made in America.’

As we all know now, eight years later, they didn’t miss anything. The six-season saga of New Jersey family-man and Mafia kingpin Tony Soprano cut to an abrupt blackness right in the middle of Journey’s ‘Don’t Stop Believin,’ displaying a full ten seconds of blank screen and silence that lasted all the way to the closing credits.

Because Tuesday nights in the summer are TV wasteland, I re-watched ‘Made in America’ last night (I actually watched the last three episodes, which includes my personal favorite ‘The Second Coming’ but we’re here to talk about the finale). And that final scene is still there after all this time. It still cuts to black, just like you remember. And it’s still a master-class in building tension. David Chase mines more suspense out of a family talking at a diner as a young woman struggles to parallel park than most pure horror directors could even dream.

But what is amazing is how much we forget about the other 55 minutes of the episode, and the hours of television that came before it, and how much everything else helps put into perspective that fade to black ending. This episode, this entire series, is not defined by ten seconds of darkness.

For example, how many people remember that such a large bulk of this episode works to not wrap up plot-lines, but to maintain the status quo held for six seasons? Despite the obvious warning signs that the death of Bobby Baccalieri and the coma of Silvio Dante should have presented, Tony is still the same dark whirlpool he’s always been — if he chose a path that leads directly to the bottom of the ocean, he’s bringing everyone around him down, too. He offers Paulie, his oldest confidante that isn’t in a hospital bed or the grave, the chance to lead the Aprile crew. Paulie initially, and wisely, declines because the last four men who took that position met an early demise. But because Tony needs someone on his right side as the world crumbles around him, he needles Paulie to agree. In a show where patterns and symbols often mean more than what we actually see, Paulie probably has a post-finale death sentence over his head even larger than Tony’s.

Tony’s own son AJ isn’t immune to his father’s pull, either. AJ, fresh off the eye-opening explosion of his SUV in the woods, decides he wants to join the military (and eventually fly helicopters for Donald Trump and/or join the CIA). And yes, in 2007 America was at war. But even Carmella Soprano, despite immediately second-guessing herself, realizes AJ needs some form of discipline. It didn’t even need to be the military, per se. Any responsibility, any sort of swift kick-in-the-ass was what AJ needs. What he gets is the opposite. He gets a new car to replace the one he blew up, and a lackadaisical job at Little Carmine’s production company. Because that is what Tony Soprano does: in the face of change, he somehow convinces you to continue being your worst self.  (“They do porn.” “They did Cleaver!” is still a fantastic exchange, though).

In the penultimate scene in the entire series, Tony goes to visit Uncle Junior in the psychiatric ward, in a scene more transformative for the character of Tony Soprano than anything that happens in the last ten seconds. Uncle Junior, a man who drove the entire narrative of the first season by putting a hit out on Tony, sits toothless, alone and veritably out of his mind. “You and my dad,” Tony says, almost but not quite tearing up, “you used to run North Jersey.”

“That’s nice,” Uncle Junior responds, and returns to looking out the window.

In that moment, the vision of the man Tony believes he has to be takes its hardest hit in the entire run of the show. In the end Tony realizes that for all his amassed power, all the shoving down of emotions like weakness and depression and helplessness, we’re all just shriveled old men in wheelchairs staring out into the sunshine.

In a way, this realization had been building since the moment in the previous episode, ‘Blue Comet,’ in which Doctor Melfie finally decides Tony is a sociopath incapable of treatment, or even simple help. Their blow-up, simmering and dying back down over the course of every season, is punctuated by one of the show’s greatest subtle lines. “As a doctor, I think what you’re doing is immoral,” Tony tells perhaps the one character on this show with a non-warped sense of right and wrong. Tony, whose own moral compass is so skewed it couldn’t find the sun in the Mojave desert if it was on peyote, gets one last dig at something he deems not up to code, if only because it forces himself to look back at himself. It’s the final proof that despite all that has transpired,  Tony can not escape from his own secluded world-view. Because that would mean changing. Tony Soprano is not only a brick wall physically, but emotionally. You can chip away at a brick wall, change tiny and almost unnoticeable parts, but in the end it still either stands there hard and unyielding, or you knock the whole thing down.

So in that final scene, does the brick wall finally get taken down? Does the man in the member’s only jacket, or the men admiring the pastries, or some other unseen goombah shoot Tony in the back of the head in front of his wife and children? Despite reading the impressively detailed “Definitive Explanation of The End” that made the rounds, and despite the quote-interpretations masked as “proof,” if you believe a definitive answer to “is Tony dead?” exists anywhere but perhaps in the mind of David Chase, you’re fooling yourself. Really, I think there’s only one acceptable answer to what happened in the last seconds of ‘Made in America.’

It doesn’t matter what happened in the last seconds of ‘Made in America.’

I recently wrote about how not knowing the fate of Jon Snow is a great thing, and how being left in the dark by filmmakers can be refreshing. David Chase took it to the extreme and literally left us in the dark, and it was the finest thing he could have done. I never understood why the lingering question is always “Does Tony die?” Because of course he dies, eventually. So does AJ. So does Carmella. So does the man in the member’s only jacket, along with everyone else in that diner. And then the world will go on without them. Tony’s life, whether it lasts another ten seconds or fifty years, will go on until it doesn’t. There just won’t be an audience around to watch anymore.

Those ten seconds of black represent not only the rest of Tony’s life, but the rest of our own. It is at the same time the most frustrating and the most comforting series finale of all time. It abruptly cuts to a blank screen, but there was an entire life lived before that blank screen, and there will be life after it no matter how short. Life goes on until the end credits.

I always think back to that reaction of my father. It wasn’t frustration at a bad ending — in that moment, he didn’t even know that was the ending. It was frustration that something he genuinely loved, something he had poured not only his time but emotions into, was taken away from him in that one second. But then he moved on. 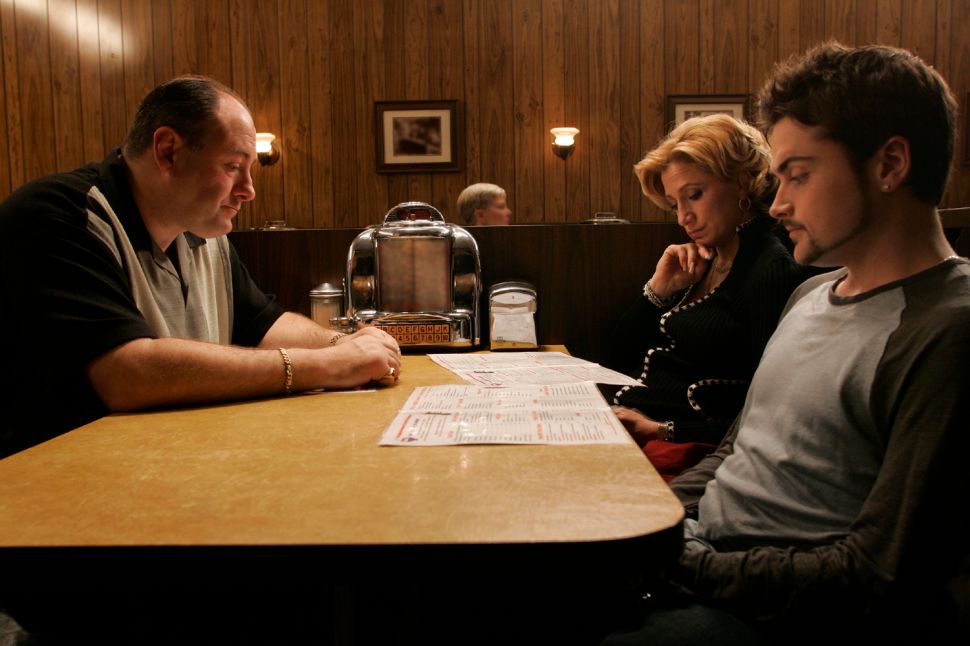 Filed Under: TV, The Sopranos,