New York City certainly doesn’t lack for places to buy things. From pressing needs to impulse purchases, there exists a plethora of stores and vendors to satisfy our every consumptive urge—clothing, take-out, coffee, drinks, dry cleaning—which, in large part, are what make it both so convenient and so costly to live here. Someone once told me that in New York, it’s impossible to leave the house without spending $30—a sum that now strikes me as something of a low-ball estimate, with $5 iced coffee and $13 cocktails.

There are, in fact, few places in New York where the point is not strongly and continuously being made that one could, and perhaps should, be spending (more) money. The city’s larger parks offer some refuge, if one can make it past the phalanxes of bike rental, pretzel and ice cream vendors that crowd the entrances, though many of the city’s smaller gems have become increasingly difficult to distinguish from outdoor shopping malls, with markets, pop-up restaurants, promotional events and long lines that sully the quasi-pastoral scene for months every year.

Among the exceptions is, or rather was, Jacob Riis and Fort Tilden parks, on the Southern coast of Queens, where a small window serving popsicles and mozzarella sticks constituted the entirety of consumer offerings. One could, after all, always bring food (novel though that concept may seem in New York) or partake of the vast array of restaurants in any of the five boroughs after going to the beach.

When I visited Jacob Riis on Sunday, however, I encountered a throng of vendors cluttering the plaza of Art Deco bathhouse. There were jewelry and vintage clothes purveyors, a woman with a van from whose open back doors hung neon t-shirts attesting to the awesomeness of the beach, chair and umbrella rentals, numerous food and drink vendors and promotional teams distributing mini Clif bars and little bottles of lemonade. Finally, when I reached the end of the boardwalk, my eyes focused on sand and sea, what me and my fellow beachgoers were ostensibly here to experience.

This, as it turned out, was the “the beach experience” as “reimagined” by Brooklyn Night Bazaar. In May, the Bazaar, formerly of Greenpoint, signed a multi-year lease with Jacob Riis park (which is managed by the National Park Service), to provide live music, dancing, food and drink vendors, equipment rentals and purveyors of various Brooklyn-y things: vintage clothing, “antiques,” sunglasses, records and jewelry (precisely the sorts of things that one doesn’t generally desire to haul into the sand.) “Nail artists, tattoo artists, hair stylists, tarot readers,” are, as Gothamist reported in May, also slated to be part of this new, enhanced, not particularly beachy, beach experience.

All of which is underpinned by the assumption that the beach is, somehow, experientially insufficient. That offering only surf, sand and sun in a comfortably groomed state for our sunbathing and swimming pleasure with lifeguards for our safety, is likely to disappoint. That those taking a train, or two trains, followed by the bus, to get to Jacob Riis, might find themselves wishing that they had, instead, visited the far-more convenient Brooklyn Flea in Fort Greene, where haute pizza and letterpressed t-shirts are available for purchase. Or at least musing that their beach experience would be enhanced by nail art, tattoos and a well-curated selection of vintage housewares.

Of course, some beach-goers may well long for the city proper as soon as they leave it. Others might see the combination of shopping and shore as a sublime unification of two highly pleasurable activities.

In which case, there are plenty of other beaches to enjoy: Rockaway has hipster street food (like normal streetfood, but made with trendy ingredients and costing roughly twice the price), live music and booze. Brighton has boardwalk cafes and a lively strip of Russian groceries, pharmacies and coffee shops just a few blocks from the shore. And there’s always Coney Island, so packed with shops and rides and attractions and additional and enhanced entertainments that the is practically an afterthought (and at times, less than appealing for swimmers due to detritus from all the eating and drinking and entertainment).

This is not to say that all or even most city beaches need be pristine. Nor was Jacob Riis exactly edenic before this year—even the “wildest” of New York parks offer a heavily modified and intensely managed version of “nature.” There is, moreover, a grand tradition of commerce by the sea: from the Jersey Shore to Venice Beach.

It’s just that there’s something insulting about the implication that the beach’s simple, easy pleasures—hot sand and cold , a good book and a bag of chips—would be improved by a hipster flea market and the kind of faux-foodie-ism that has become extremely popular of late, in which street food is tamed and elevated with upscale ingredients and prices to match. For many, of course, that formula makes for an extremely pleasing Friday night or Sunday afternoon, but there is no reason that the beach need be yet another venue to partake of the ever-recurrent melange of Brooklyn-y things to buy and eat, which can pretty much be enjoyed in neighborhoods across the city via Etsy and Seamless. But there is, to my mind, at least, nothing so fine and rare as a good day at the beach.

Nor does it seem that I am not alone in thinking that hauling shopping bags to one’s towel is not, in the end, very appealing. While the food and drink vendors tended to steady lines throughout the day, few people seemed inclined to browse for a new pair of boots or buy a bracelet that might just get lost in the sand. If the vendors sold beach towels or flipflops, even souvenir seashells or mermaid art, they might, at least, have seemed less out of place. As for the dance floor, even when a cool breeze kicked up and the sunlight softened to a flattering golden glow, the sole dancers were two women trying a little too hard to look like they were having fun.

Nothing against the Brooklyn Night Bazaar, which lost its home in Greenpoint earlier this year, but why does it have to be happen during the day, at Jacob Riis? 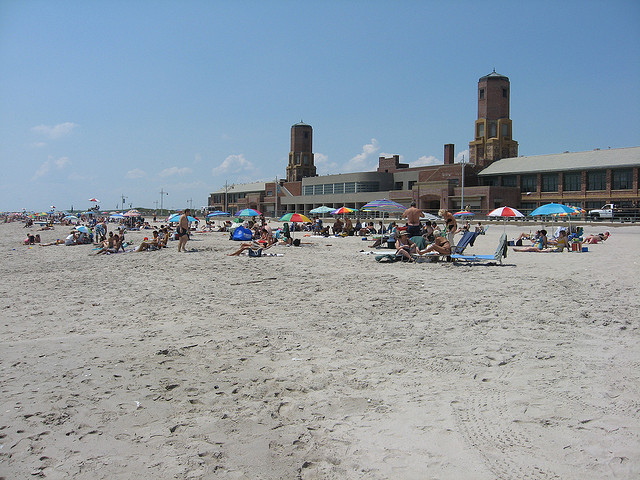