When a 73-year-old Senator from an inconsequential state, who has spent his career pushing the envelope rhetorically as the only out of the closet Socialist in the U.S. Senate, announces his bid for the Democratic presidential nomination, and shortly appears to be overtaking the heir apparent despite her many advantages, it is worth asking why.

Or maybe it’s totally obvious: Which would you choose? A shaggy, avuncular ex-hippy with the persona of Vermont’s biggest industrialists – Ben and Jerry, purveyors of cold, creamy goodness with ribbons of social justice and nuggets of truth that don’t redound to the credit of the Obama Administration? Or the tightly coiffed, elusive, painfully scripted Wicked Witch of Washington? Karamel Sutra or flying monkeys?

In this case, as the Second Wave feminists used to say, ‘the personal is political.’ Mr. Sanders’ main asset is that he isn’t Hillary Clinton. Being ‘not Hillary’ includes: not believing that he is automatically next in line and merely enduring the tedious process of getting back to the White House; being willing to speak, off the cuff, to journalists, potential supporters, voters and even citizens who are not on his payroll; the absence of a record of deceit and prevarication; and a lifetime of politics based on conviction, some stunningly misguided, all honestly held. Relative obscurity beats overexposure, too.

Even Mr. Sanders’ forthright embrace of the socialist label works for him, at a moment when much of the Democratic base has moved alarmingly leftward.

Not being Hillary is worth money—$15 million raised in Mr. Sanders’ first three months, in smaller chunks from a wider base than Hillary has managed. Many thousands of enthusiastic, not-yet-jaded young people turn out for his rallies. Young liberal voters are balking at the coronation process the Democratic Party establishment/Hillary strategists have planned. Perhaps a groundswell for any moderately plausible challenger from the left was inevitable, given that a majority of Democrat voters know Hillary well, and find her untrustworthy.

Even Mr. Sanders’ forthright embrace of the socialist label works for him, at a moment when much of the Democratic base has moved alarmingly leftward. Some socialists dislike his support for post 9/11 wars. But he takes domestic policy positions based on consistent principle.

What does Hillary actually believe? What are her bedrock principles? What’s polling well this month? Like the rest of us, his supporters have watched her lie about anything and everything over three decades. Recently the nation watched her brush off her illegal personal server and hidden emails, and desperately rationalize her use of high office for personal gain. This is to say nothing of her achievements or lack thereof.

‘Character is Destiny,’ as Heraclitus told us and we forget to our peril. Mr. Sanders’ young, idealistic backers may care, as Hillary’s more powerful, cynical ones do not, that Hillary’s consistent scheming, power grabbing and venality is rooted too deeply to change. Even – especially – if she wins.

Nowhere is the contrast in their real values clearer than in their personal approaches to money. Hillary’s net worth hovers somewhere between $55 million and $100 million. All of that was made after her husband’s presidency, in exchange for… speeches to groups, many of which had business that she could help with as Secretary of State – or as a future President.

From this we know that Mr. Sanders is an honest public servant who never cashed in on his position. We used to expect that personal integrity from holders of high office. Arguably neither candidate understands business, job creation, or the private sector. But Bernie’s relatively small assets tell you that he knows how the middle class lives.

Similarly, Mr. Sanders has been unusually honest in discussing the failure of the Obama economic recovery and reality of high unemployment that the Administration masks. “When you talk about the economy we also have to have an honest assessment of unemployment in America,” Mr. Sanders told 7,500 people at a rally in Portland, Maine on July 6th. “Once a month the government publishes a set of figures, and the last figures they published said that official unemployment was 5.4 percent. But there is another set of government statistics and real unemployment if you include those people who have given up looking for work and the millions of others who are working part-time 20, 25 hours a week when they want to work full-time, when you all of that together, real unemployment is 10.5 percent.”

In his youth in the heady early 70s, he was the sort of libidinous intellectual manqué who needed to share his woolly headed theories about female sexuality.

Considering that there are 92+million Americans out of work, most permanently, and a generation of young people sitting out what should be the start of their earning years, acknowledging this central problem is critical. Even if he proffers Ben and Jerry’s solutions: appealing, hyper caloric, not good for the body (politic). Those include free college for most, and Medicare for all, neither of which will do much to create jobs.

Hillary’s attempt to co-opt Mr. Sander’s socialist economics, in her speech at the New School on Monday, missed the mark. Her ideas were an odd patchwork that addressed nothing central. If anything they illustrated that neither she nor her speechwriter understand economics. But more pointedly, if Bernie’s popularity owes to character, then specifics don’t much matter.

Nor does Mr. Sanders buy into the standard liberal view that taking away guns is the answer to every crime anywhere. He recently told CNN’s Jake Tapper that ‘Folks who do not like guns is (sic) fine, but we have millions of people who are gun owners in this country; 99.9 percent of those people obey the law.” When did you last hear a Northeastern Democrat acknowledge that? “I come from a state that has virtually no gun control, but the people of my state understand—pretty clearly—that guns in Vermont are not the same as guns in Chicago or guns in Los Angeles. In our state, guns are used for hunting. In Chicago, they’re used for kids in gangs killing other kids or people shooting police officers, shooting down innocent people.” Blaming crime on culture, not guns is a huge departure from the Democrat party line.

Bernie hasn’t always been your Brooklyn-accented, straight talking, wise old uncle at the Thanksgiving table. In his youth in the heady early 70s, he was the sort of libidinous intellectual manqué who needed to share his woolly headed theories about female sexuality. There was that 1972 Vermont Freemason article, recently circulated by Mother Jones, which began: “A man goes home and masturbates his typical fantasy. A woman on her knees, a woman tied up, a woman abused.” And, “A woman enjoys intercourse with her man — as she fantasizes being raped by 3 men simultaneously.” Apologists claim the article was a crude attempt to critique gender stereotypes. His spokeswoman is too smart to defend it.

In another crudely Freudian rumination for the Freeman, Mr. Sanders shared his theories of repression and disease: “[H]e cited studies claiming that cancer could be caused by psychological factors such as unresolved hostility toward one’s mother, a tendency to bury aggression beneath a “facade of pleasantness” and having too few orgasms. “Sexual adjustment seemed to be very poor in those with cancer of the cervix,” he wrote, quoting a study in a journal called Psychosomatic Medicine,” according the NYTimes of July 4th.

If that isn’t #waronwomen, what is? First you get cancer of the cervix, then Bernie Sanders tells you it’s because you were frigid. A Republican would be facing a media firing squad for these thought crimes, even after 40 years. Hillary’s opposition research team did an excellent job disseminating this stuff. Pity Bernie is too old and unthreatening for it to stick.

But can Bernie win the nomination? It’s a long shot. Victories in Iowa and New Hampshire would open things up. But the Democratic establishment is strong and fully invested in Clinton.

Democrats do love their challengers from the left. The young Hillary volunteered for Eugene McCarthy’s now legendary 1968 challenge to Lyndon Johnson, then Hubert Humphrey. Richard Nixon won. So even if Mr. Sanders doesn’t win, Ms. Clinton can lose. The more serious the primary challenge, the less likely the establishment candidate wins the general election. Go Bernie! 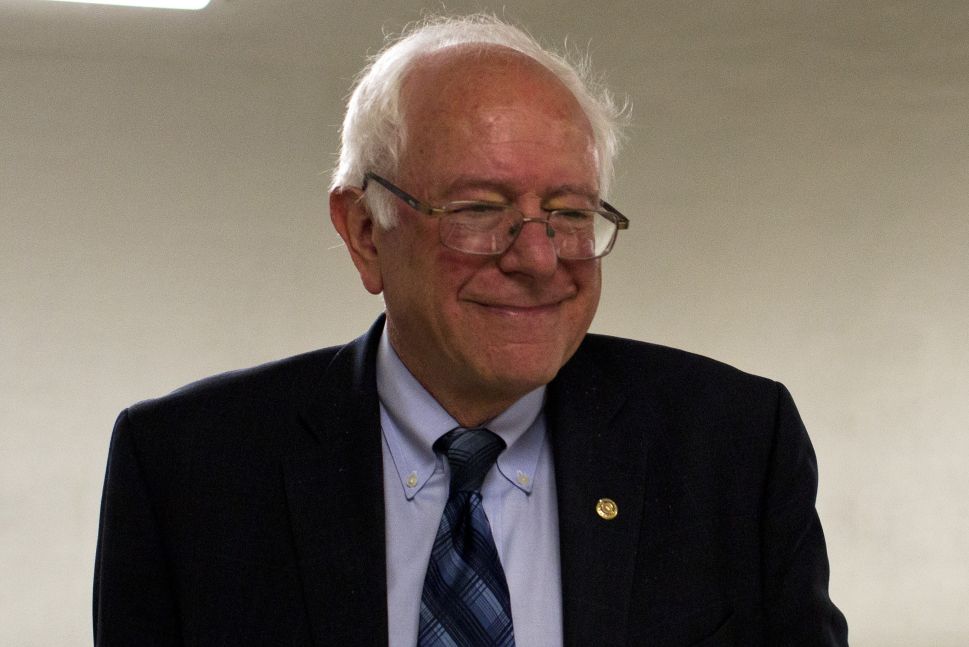