Newsflash. Leather sandals, the brown kind with thick straps, the odd buckle and even a sling are being worn by men who are not your Dad in the 1970s. It is officially O.K. to wear traditional, once-extremely unfashionable leather sandals around town, just keep a few expert tips in mind:

What the Professionals Say

• “Sometimes less is more,” Kevin Harter, Bloomingdale’s vice president of Men’s Fashion Direction told the Observer. “Go for a pair with fewer straps. My personal preference is three.” Mr. Harter also suggested a sturdy sandal. “Sandals can be tough on your feet so make sure there is sufficient support in the sole.”

• “Sandals are most successful when they’re designed as a shoe-sandal. I don’t like casual open-toe sandals bordering on flip-flops. Those types are simply hideous, tacky, annoying, and silly. I own quite a number of shoe-sandals and wear them with shorts, suits and occasionally with freshly dry-cleaned, buoyant caftans.”—Iké Udé, artist, aesthete, dandy.

• Timo Weiland, creative director of namesake menswear line, told the Observer there are two initial conditions for men to stylishly wear sandals off the beach. First, he agreed that toenails must be presentable, but not too manicured. And second, “The rest of the look should be sharp so that the casual footwear doesn’t toss the guy into Lazy-ville or post-collegiate fratboy territory,” he said.

• “Toes and feet are an often-forgotten finishing touch to a body grooming regimen,” said a Master Barber at The Art of Shaving. He suggested using a pumice-based foot scrub or pumice tool to remove dead and dry skin, while taking a hot shower (this will help soften skin). “People with dry or cracked heels may want to use a heavier, heel-specific balm at night to heal skin.”

• “Don’t wear anything that looks too sensible,” suggested Marcus Teo, vice president and global creative director at Georg Jensen. He recommended leather and strappy sandals with a fashion nod such as a strong buckle or interesting leatherwork.

• “If sandals were good enough for Jesus… they’re good enough for me!” said Thomas Khadafy, shoe guru and jewelry designer, who loves to travel with sandals. “I always have at least three pairs on hand… usually a black pair, a brown pair and some print. On a mountain trip, while my friends were complaining about their fancy hiking shoes being filled with , my feet were happy and dry.”

Now that the rules of mandals have been properly conveyed, it is time to get specific. Last month, droves of menswear specialists offered up iterations of fantastic (and not-so-lovely) footwear on the streets of Europe during the Summer 2016 fashion weeks. On the well-heeled side, the homme in a seersucker Thom Browne jacket (above left) added a pop of color with his electric blue mandals, while a simple leather pair nicely accented a pair of gray cropped trousers, spotted in Milan (left).

Now, onto the mishaps: These two fashion bros broke the cardinal rule of pairing socks with open-toed kicks, in a glaringly obvious way. A pair of socks absolutely sabotaged some perfectly nice Prada sandals (right), while the brooding bloke in shorts really killed the vibe by covering his skin from toe to mid-calf (above right). His Alexander McQueen sandals did not stand a chance. 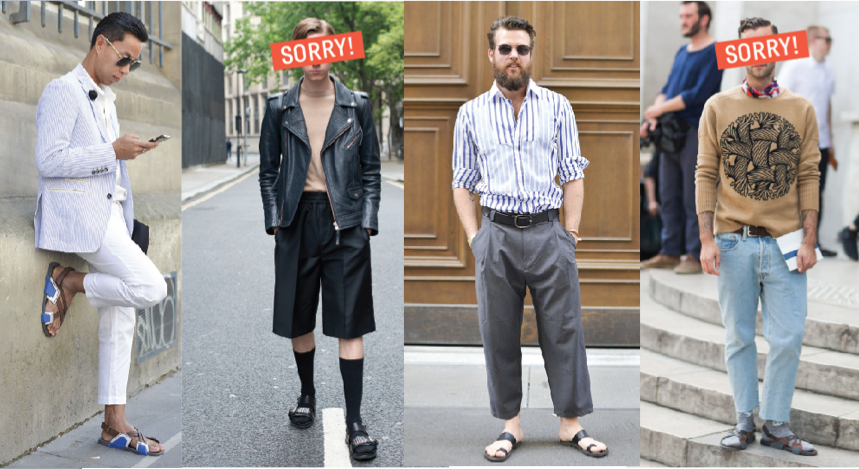