TORONTO—Jews depicted as Nazis, right here in the very heart of Canada, the most docile country on earth? It can’t be. Tell me my eyes are playing tricks on me.

That was my thinking as I saw the placards at the anti-Israel hate fest right in the heart of Toronto.

Canadians often view us Americans as their wilder, more violent cousins. Canadians like Americans. But they also have this view of the average American shooting up a McDonald’s every time they burn his Big Mac and a gunfight breaking out on an American highway if someone gets cuts off in his lane.

I happen to love Canada. If Jews are the Chosen people, then our Canadian brethren are the frozen people (OK, I admit I stole that line from Shimon Peres who was quoting the President of Iceland speaking of his own country).

The protesters held enormous signs that claimed Israel was guilty of a holocaust against the Palestinians. It was so vile that I wanted to throw up.

Canada is one of the most beautiful countries in the world, its people among the most tolerant and pleasant. Which is why I was so shocked to see the huge anti-Israel demonstration right outside the American consulate in downtown Toronto this past Shabbat.

I’m in Canada for two weeks to host a new TV series called “Divine Intervention,” which counsels people with serious family and personal challenges. Invited to speak at the Anshei Minsk Synagogue in downtown Toronto, I addressed the Al Quds day rally against Israel that was to take a place a few blocks away. At the conclusion of the speech I walked over to the American consulate to join the pro-Israel counter demonstration that garnered a fairly decent crowd – especially on a Shabbat – of Jews and Christians of every denomination and walk of life. It was interesting that the organization who chose to make the effort to organize the counter demonstration to the Al Quds hate fest was the JDL. Were the mainstream Jewish organizations asleep? Why were they not out in force to defend and protect the Jewish State?

Regardless, I was not prepared for just how deep the hate for Israel was across the street.

There I saw thousands of people holding signs with Israel and swastikas. Going well beyond the average hate of falsely accusing Israel of being an apartheid State, the protesters held enormous signs that claimed Israel was guilty of a holocaust against the Palestinians. It was so vile that I wanted to throw up.

Imagine the degree of Jew-hatred it takes to trivialize the wholesale slaughter of six million Jews and 1.5 million children by equating it with Israel’s defensive wars against genocidal Hamas.

With me was a non-Jewish Armenian member of our TV crew. I said to him, “The Armenians have it bad enough that so much of the world refuses to acknowledge the genocide of the Armenians by the Ottoman Turks in World War I. But with us Jews it goes much further. They acknowledge our holocaust only in order to accuse us of doing the same to others.”

How could this happen in Canada? How could such vile lies be aired publicly, right outside the US Consulate, in a country that so often accuses the US of being too violent?

The only thing I had ever seen that approached this level of hatred is when Dennis Prager and I debated in the Oxford Union last November, only to hear our opponents – respected academics all – accusing Israel of being a Nazi state.

Surely there is a difference between legitimate protest and the most vile hate speech. If Israel is a Nazi State, where are the gas chambers it built? Where are the Palestinians who are being transported in cattle cars to extermination camps? Why aren’t Israel’s 1.5 million Arab citizens hiding in monasteries and cupboards to escape the Israeli SS who are hunting them down to shoot them and throw their bodies in ditches?

I feel stupid even responding to such rancid, ugly drivel.

So why am I? Why even dignify such disgusting, lowly garbage with a response?

Because if there is one thing we’ve learned about the Jews it’s the fact that the world will believe absolutely anything about our people. And we better start taking this lie seriously as well, before it becomes ingrained into the public conscience.

For goodness sake, I watched hundreds of Canadian police giving people the right to stand up and accuse Jews of being Nazis. And yes, I believe in the free speech. But exercised in this way, do you really think this stuff won’t spread and that we don’t need to respond?

2000 years ago, when they accused the Jews of killing God, no Jew thought it necessary to counter the ridiculous lie. Murdering God? You have to be kidding. How can a few powerless Jews who could not even defeat the Romans gang up on God and kill him? And yet, the world believed it and countless Jews died as a result.

When medieval Europeans accused the Jews of poisoning the wells of Europe and murdering one third of its total population, the Jews said, “Cut the crap. We’re the most powerless, persecuted minority on this continent. We could never pull off something that heinous. And murder is against everything we believe in. And there aren’t even enough Jews in Europe to pull this off. And what of all the places where people are dying where there aren’t any Jews at all? We’re not going to respond to this gobbledygook.” Yet the world believed it and countless Jews were killed in revenge pogroms.

And when Europe, seemingly never satisfied with Jewish blood, said that Jews eat the blood of Christians in their matzos, our response was, “What? Are we vampires? No one believes that Dracula is real. There is no way this can be given credibility. And besides, unlike every other culture in the world Jews are expressly forbidden by their Torah from eating even a single drop of a ritually slaughtered animal’s blood, let alone a human. No need to respond. The world will never believe it.” And yet, blood libels about Jews putting Christian blood in matzos persisted well into the 20th century leading to many pogroms where Jews were hacked to death. And who can say that even this will lie will never reappear?

Jews as Nazis? We might want to dismiss it as loathsome and ridiculous. But it’s appearing more and more and we better be damned vigilant in our response.

Newsweek called Rabbi Shmuley “the most famous rabbi in America.” He is the founder of This World: The Values Network, the world’s leading organization defending Israel in world media. He is the international best-selling author of 30 books, including his most recent, “The Israel Warriors Handbook.” Follow him on Twitter @RabbiShmuley. 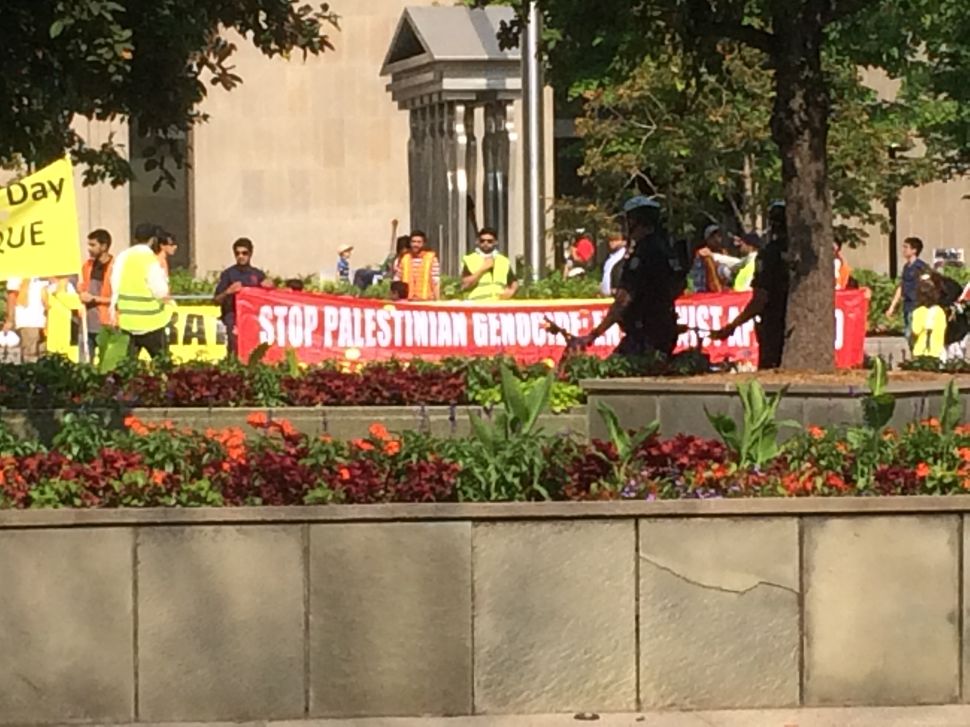