It’s summertime, which means camp time. But while camp typically conjures up imagery of bonfires and skiing, some camps evoke firing ranges and rocketry. Summer camp for Palestinian children is nothing at all like camps for American kids.

When school is out, kids in Gaza and the West bank train to become future terrorists. Yes they have sports. But they also learn bomb making, sharp shooting and terror tactics.

Not that they don’t have a drama club in these camps. They do—but it comes with a special Palestinian twist. A few years ago I was at a summer camp graduation where the Palestinian tweens staged a special performance. They enacted the kidnapping of an Israeli general. They grabbed him from his car and then took him away. The crowd cheered. This was near Ramallah—not an ISIS training center.

Daily activities in these summer terrorist training centers often include making believe that the campers are Palestinian prisoners in Israeli jails. They play act where one camper is the Palestinian prisoner and the other portrays an Israeli interrogator. Of course, the game and the performance always have the same ending—the Palestinians is freed and kills the Israeli and then starts a revolt.

These camps are sponsored by both the Palestinian Authority and by Hamas. There is very little difference between the organizations.

According to Palestine Media Watch, an Israeli non-profit, senior PA officials attended a recent graduation ceremony of a summer camp in the West Bank.  Nablus District Governor Akram Rajoub, Secretary of Fatah’s Nablus branch Jihad Ramadan, and representatives of the PA National Security Forces were all there.

This particular camp was for children of martyrs (terrorists or those killed by Israel) and prisoners. The theme of the summer was summed up in the name of the camp.  It was: “Jerusalem In the Eyes of the Lion Cubs and Flowers of Palestine.”  Sponsored by Fatah, the camp celebrated the “heroism” of the campers’ parents.

The graduation ceremony, de riguer in all Palestinian summer camps, was broadcast on Fatah TV and culminated with a parade. The campers marched wearing matching clothing: fatigues.The older kids carried real weapons slung over their shoulders, most of them AK-47s. The younger campers brandished toy weapons.

The camp is where Palestinian children, starting at a very young age, are inculcated to hate.

Camp directors are not embracing the land or culture. They are not discussing great challenges past, present or future and the need to create and build a new dynamic Palestinian society. The campers are taught, on a daily basis, activity by activity, song after song, that only by destroying Israel they will achieve their dream.

Palestinian leadership has not yet accepted that Israel is here to stay. They focus on their hatred of the Jewish state and miss the perfect opportunity to teach their children how to build a better future. It is much easier to preach hatred than to plan for a peaceful future.

For Palestinian leadership it is all about fighting and killing and kidnapping and violence and terror. The message is delivered from the top down. From Abbas straight to the youngest of summer campers. 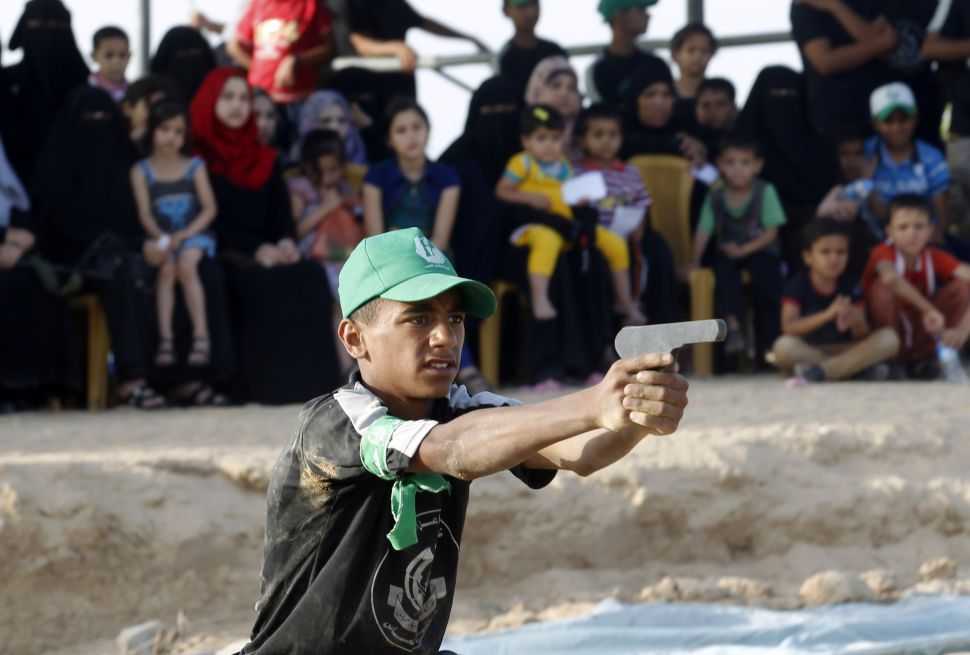