Let’s hear it for the The New York Times, which today completed a seemingly long-sought-after trifecta of dyed-hair coverage. In the print edition of the paper’s Thursday Styles section, the Times brings a microscope to women who dye their armpit hair varying colors. Blue, for instance. Or pink. Purple, too.

The Internet, it turns out, is up to its armpits with women who dye theirs. Miley Cyrus displayed her newly pink underarms in a photo she posted to Instagram on May 1, drawing more than 396,000 likes and more than 30,000 comments. On Instagram, more than 700 photos of women (and a handful of men) have been posted with the hashtag #dyedpits. And a blog post by Roxie Hunt, a Seattle hairstylist, “How to Dye Your Armpit Hair,” has been shared more than 37,000 times since it was published in October.

This isn’t monocle-level absurdity, though it does feel dubious. Of course it’s a thing, as the article demonstrates, but there are lots of trends on Instagram a reporter can fish out—”#GrannyHair Is The Hottest New Hair Trend on Instagram,” a BuzzFeed headline declared in March—and they’re not all worth writing about.

But it certainly isn’t the first instance in which the Times has examined people who choose to dye their hair, wherever it may be. This past April, to cite another example, the paper dissected men who dye their facial hair in a piece whose online headline read, “The Beard Goes Technicolor” (only a little more than a year after another earth-shattering piece, “The Brooklyn Beard Goes Mainstream,” was published).

“Has the beard become such a hipster cliché that some wearers now need an embellishment to set them apart from every other 20-something with scruffy facial hair?” the Times asked.

“Yes, we are talking about the suddenly ubiquitous colored beard,” the story went on to explain. “Numerous street-style sites, Instagram pages and Tumblr homages like The Bearded have been featuring stylish lads with rose whiskers and aqua stubble. There’s also the occasional neo-hippie with a rainbow-hued imperial.”

As standards of beauty have evolved and become more fragmented, the Times, to its credit, has gotten more adventurous with what kind of dyed hair it chooses to write about.

Back in 2011, the paper was covering “shock locks”—as well as ombré and tie-dye—as though colorful head hair was some sort of revolutionary thing. “Some women are even wearing them to the office, as does Numidas Prasarn, 26, who works at the visitor center at the Brooklyn Museum,” the Times wrote. “She keeps her purple hair long and simply styled.”

Whoa! Call us when she shaves her head.

What’s so annoying about this kind of coverage is that the Times acts as though all these people are dyed-hair apostates when it just seems like certain aspects of underground culture—punk style, for instance—have percolated into the mainstream.

Anyway, humans only produce so much hair in so many places, so the Times is running out of options here. And although it’s a famously prudish paper, it has been lightening up of late—choosing, for example, to print the word “pussy” in certain instances. The dyed-arpmit story also mentions one woman who colors her hair “below the belt.” And let’s not forget all those articles on male waxing, laser treatment and not shaving at all.

With that in mind, we wouldn’t be surprised to see a Times trend story devoted exclusively to dyed pubic hair in the next year—probably less. 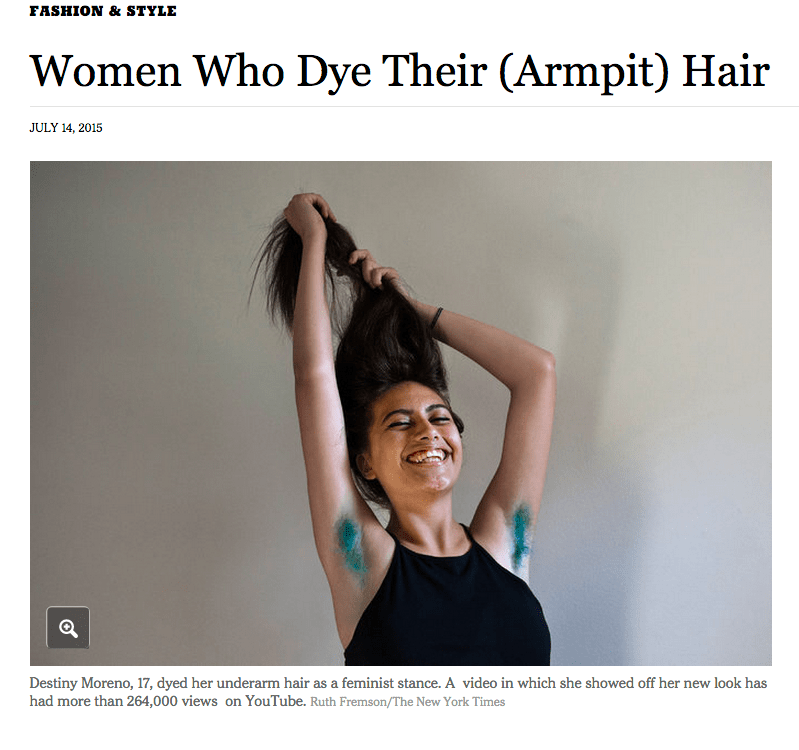