What is it about the ’80s we find so appealing?

Despite its retro fetishism and insular network of artists, the so-called synthwave genre, a future-focused sound undeniably indebted to the pop culture of the Reagan era, is pulsing forward with a Daft Punk-meets-John Carpenter swagger.

Synthwave’s blending of modern electronic composition with nostalgia makes for an irresistible combination.

In the past couple of years alone, the sub-genre of electronic music also known by names like outrun, retrowave and futuresynth, has transformed from a whisper on a few select Internet hubs into a self-sustaining musical ecosystem hoisting itself up and expanding rapidly.

It all began in the mid-2000s, when gamers and horror nerds took a liking to French house artists like Justice, Kavinsky, and College, who were creating sounds inspired by ’80s film score legends (Carpenter, Goblin, Brad Fiedel). Since then—and especially after the release of the 2011 arthouse film triumph Drive—the genre has exploded in a plume of modern electronic fury, with artists emerging around the globe, from Stockholm to Dallas, Texas.

That satisfied-but-anxious feeling you had watching Terminator for the first time, that inexplicable sense of comfort you got every time the Beverly Hills Cop intro came on, these sensations might just bubble up again when you hear the dark aggression of artists like Perturbator and Mega Drive or the pure ’80s worship of Mitch Murder and Miami Nights 1984.

Mega Drive, arguably one of synthwave’s biggest names, remembers the ’80s with a simple fondness that pervades his music. “That whole time in my life was pretty magical, as everything was still new and big,” he says.

‘Many movies from [the ’80s] feel like love letters to a vanishing present.’

That’s supported by science: we tend to favor music we’ve heard before, and memories tied to music often relate back to a particular time in our lives.

But maybe it goes deeper than that, too. For other synthwave artists, like Mitch Murder, the ’80s represent a clash of optimism and pessimism, a fascination with flying cars and robotic dog walkers, tinged with a dark apprehension about what’s to come.

“On the one hand, we had all these cool predictions about how the near future would play out and how awesome it would be, like Back To The Future II‘s depiction of 2015,” he says. “On the other hand, there was this general concern that we could be wiped out at any moment from a surprise­ nuclear war. So I feel like people wanted to make the most of the time they had.”

Modern synthwave might be best explained as a set of two bookends, one firmly anchored ’80s-styled warmth and familiarity, and the other still ever expanding into a potentially unsettling—but nonetheless astonishing—future. Now that we’re in the thick of a data-driven takeover with no signs of turning back, where are we supposed to seek comfort? The ’80s were the final years before technology snatched us in its inescapable grip. Temporarily dialing back to a time when technology was a controllable beast, and robots were just a wild prediction, seems like a pretty good answer.

“Many movies from that time feel like love letters to a vanishing present, with impermanence embedded in every scene,” says Denver-based synthwave enthusiast Jesse Wroe. “Ferris Bueller’s Day Off made me miss my teenage years while I was still a teenager.”

As for the future of synthwave, there seems to be an irreconcilable split among fans who fetishize its niche status. Wroe mentions the “black hole” of recommended YouTube videos for synthwave artists—a modern equivalent to crate digging—that maintains the genre’s “underground” cred despite its growing popularity. “Discovering synthwave online is part of the fun of listening to it,” he says.

Regardless of synthwave’s emergence to the level of zeitgeist, its artists remain devoted to the sound’s aesthetics, motivated by more than traditional definitions of success.

“I find it hard to believe I’d stop making this kind of music just because it’s not in style anymore,” says Johan Bengtsson, a.k.a. Mitch Murder. “It wasn’t when I started, after all.”

***
The Best NY Experimental Records of the Year (So Far) 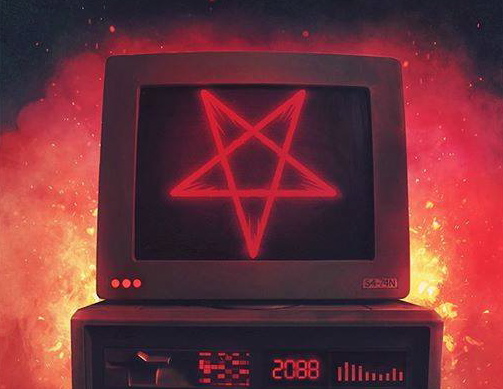