The children of Philadelphia thought they’d see a giant rubber ducky floating down the Delaware River last weekend. Instead, they got 11 tons of disappointment, after the “Mama Duck,” who was supposed to appear at the city’s Tall Ships Festival rising 61 feet off the , experienced its own Deflategate.

The massive, blow-up bathtub toy’s appearance was cut short—very short—first by a 60-foot-long tear in her side and later, after she was resuscitated, by a second, 20-foot tear, the New York Daily News reported.

Due to weather and concerns that the duck would cause more extensive, expensive damage if she got loose on the river, she was retired, leaving kids and other spectators who anticipated her complaining on Twitter, the News said.

“I was shocked,” Mr. Hofman said, when he learned of the large duck’s planned arrival in the City of Brotherly Love. “They don’t have permission to show my duck again. And they are charging money for tickets…They make it into this joke, but the rubber duck is not a joke. It is serious artwork which connects all people in the world.”

Mr. Hofman’s duckies and other oversized toy animals, such as a big plush bunny, have been seen all over the globe, from Osaka to Sao Paulo. His website says the duck “has healing properties: it can relieve mondial tensions as well as define them. The rubber duck is soft, friendly and suitable for all ages!”

But the Philadelphia duck wasn’t his, Mr. Hofman said, and the producers of the Tall Ships Festival were showing his work without approval. He is considering legal action, he said.

When an organizer contracts with Mr. Hofman for a ducky, which the Los Angeles Tall Ships Festival did last year, he sends specifications and instructions for its construction. But Mr. Hofman alleges that the organizers of the L.A. festival not only didn’t pay him for the L.A. ducky, they stole the plans and tried to present the duck again in Philadelphia, despite not contracting for her.

The producer of both shows, Craig Samborski, takes issue with Mr. Hofman’s accusations. First off, he did pay him, he told Philadelphia  (about $50,000, he thinks). But also, not only did he never get drawings for the duck he ordered for the L.A. festival (they were more like “artist sketches,” he said, and had the wrong specifications), the duck that was set to appear in Philadelphia wasn’t Mr. Hofman’s because it was based on other drawings Mr. Samborski had put together.

“It’s just another large inflatable duck,” he told the magazine.

Tell that to the children of Philadelphia. 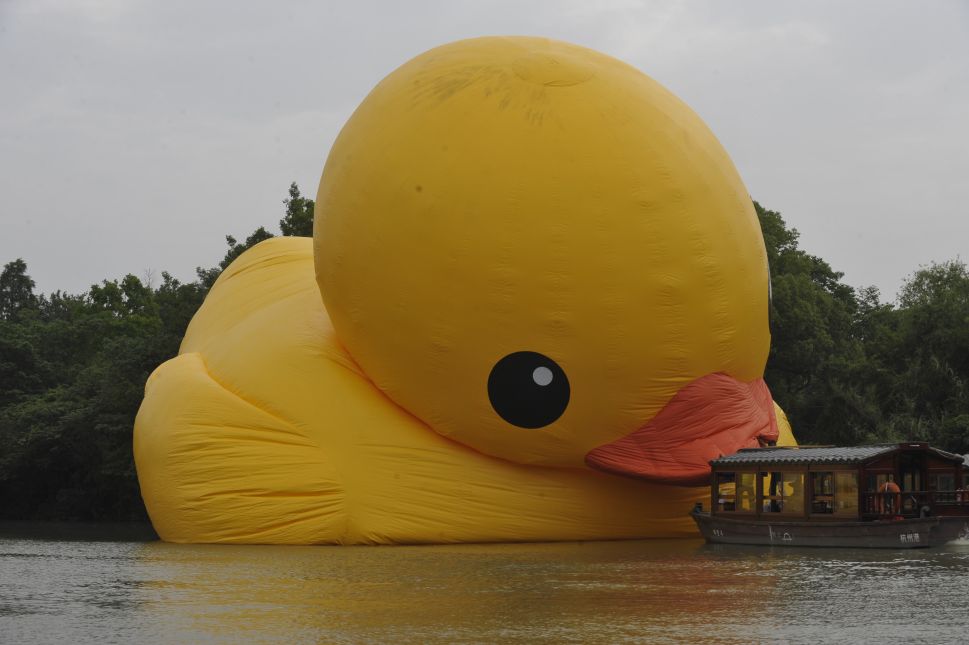