PATERSON – When he ran for mayor, Jose “Joey” Torres spoke of his personal and political relationship with Governor Chris Christie, who last year swore him into office in front of City Hall, and now barnstorms New Hampshire in a 2016 bid for the presidency. PolitickerNJ asked the mayor if Christie’s absence from New Jersey  concerns him.

“His being out of the state has not hurt Paterson,” said the mayor, pointing to aid his city received and noting his and his staff’s budget prowess in bringing the city’s $252,613,000 budget within the state-required two-percent cap.

But Paterson simultaneously significantly lost school aid, resulting in the devastating layoffs of over 200 staff at the schools, a tsunami that Assemblywoman Shavonda Sumter and Assemblyman Benjie Wimberly tried to reverse in the budget process, restoring money that Christie subsequently vetoed.

If Torres has not demonstrated a substantial appetite for revenge after last year’s grueling mayoral election, the swapping of budget help on the city side came accompanied by deep school aid cuts.

On the day that Christie swore in Torres, in fact, numerous teachers and those sympathetic to the New Jersey Education Association (NJEA) vociferously protested Christie’s presence.

A bloody cartoon picture of Christie shook high above the crowd.

Today, neither Sumter nor Wimberly, on the opposing side of Torres in last year’s mayoral contest, attended Torres’ State of the City earlier today.

“On the school side, I can’t go there,” Torres said. “I don’t control the schools.”

“He’s the mayor of the city,” he said. “We expect our mayor to be involved. Education is how the economy is going to thrive. I would encourage the mayor to get involved.”

“As elected officials we have to care about all sectors, and education is a sector,” said Sumter. ‘We cant ignore it even though we’re under state control. He can’t promote getting the city under the two-percent cap when you don’t have full services for your city.”

A city recreation director, Wimberly maintains good relations with the mayor. But his and Sumter’s and Christie’s opposing sides on the schools issue underscores an ongoing chill in Paterson, where politicians maintain their toeholds as lower level educators become collateral damage.

Schools, however, are not the sole repository for politics.

Breaking from past political precedent, Torres said he plans to run a slate of candidates in next year’s Paterson ward races, expressing intentions born less of raw vengeance and more from the buoyancy of demonstrable political capital.

“In my previous eight years [as mayor],” I never got involved,” Torres told PolitickerNJ. Or if he did, he maintained solely a behind-the-scenes presence.

“As I move forward I see the value of council support for your agenda,” said Torres, who convincingly won the mayoralty last year and who has spent a year consolidating power through city departments. “The answer there is I would explore putting together a slate.”

More immediately, longtime Torres family friend Manny Martinez is running in the 1st ward in November for the seat vacated by the combusting Anthony Davis, bagged and bumped out of office on corruption charges.

First elected in 2002, Torres won a second term in 2006, then famously lost to Jeff Jones in 2010. After four years in exile, he came back last year and convincingly won reelection against a politically hobbled Jones and in the face of Councilman Andre Sayegh, who had the support of the Democratic Party establishment.

In his speech today, an energized Torres noted his ability to balance the city’s budget while also highlighting his administration’s reduction of crime in the past year, including the reduction of shootings by 54% and homicides by 45%.

“It’s so good to be back,” Torres told a crowd at his State of the City today that included his business administrator and longtime loyal ally, state Senator Nellie Pou (D-35); and Police Director Jerry Speziale (pictured, above left), the former sheriff of Passaic County.

While revenge has not characterized Torres’ first year in office of this, his third tour in the executive chair, the mayor may not have a choice but to go after Sayegh, in particular, who has consistently maintained opposition to Torres. “The potholes and the deficit are both getting deeper,” Sayegh told PolitickerNJ in response to Torres’ State of the City Address.

Torres shook his head. “For Andre to talk about the roads and then not vote on the potholes project while not offering a plan of his own speaks volumes,” he said.

Sayegh said he doesn’t like the plan, a $35 million bond that yolks future generations to the payoff burden. But Torres maintained that his chief foe in last year’s mayoral election and Tavarez are simply naysayers.

“They’re just casting a no vote to be contrary,” said the mayor, who in his speech flexed his political capital, noting in particular the alliance of “the Big Three,” which he formed with Newark Mayor Ras Baraka and Jersey City Mayor Steven Fulop. The alliance overlaps the so-called quad county Northern alliance of Essex, Bergen, Passaic and Hudson. “We are in a position to create meaningful legislation because of the issues we face,” said Torres.

But Baraka, by contrast, at least to date, has played a visible and aggressive role in opposing Christie’s designs on the public schools in his home city of Newark.

Impaled on politics, Paterson’s teachers and aides saw their numbers drastically reduced, even as the mayor this afternoon boasted that he has added 46 police officers to the ranks this year alone, and announced a federal grant championed by U.S. Rep. Bill Pascrell in the amount of $7.5 million. “It will allow us to hire 49 firefighters,” Torres beamed, and the remark got a big and sustained round of applause. 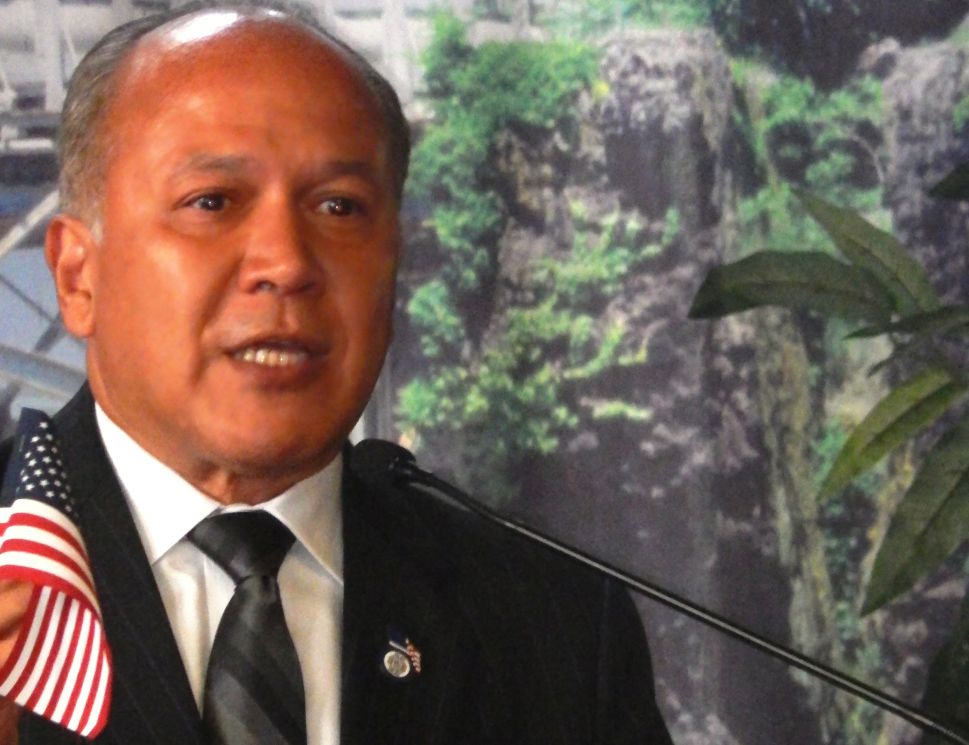