The New York Stock Exchange reopened trading at 3:10 today, after being shut down for over three hours because of a “technical issue.” The snafu occurred after a faulty software update that resulted in connectivity issues.

There were no signs of malicious activity, but conspiracy theories about hacking still ran rampant, especially because United Airlines and the Wall Street Journal also experienced outages today.

And of course the conspiracy theorists (and everyone else who wanted to vent about the stock market) took to everyone’s favorite sounding board: Twitter.

Here, 10 of our favorite #NYSE tweets:

Call Huma Abedin for instructions on how to get it to work. https://t.co/UOq22bZ1Mr

Looks like I picked the wrong day to take a United flight to the NYSE for a story on http://t.co/V0bk9s9ZgC

If you’re a financial trader who flies United and loyally reads the WSJ…what a day you’re having right now.

Ok Joe Biden, we're not mad. We just want to know which button you pushed.

Q1 Did you cause the NYSE to crash? MT @voxdotcom: 9 questions about the Illuminati you were too afraid to ask pic.twitter.com/UsuXSohg7A

If this turns into the tech apocalypse, hold onto your defunct gadgets, they can be used as weapons to fight off displaced tech workers.

Is NYSE waiting on the tech line for help in rebooting trading system? "Your call is important to us…You are next in line…"

#NYSE trading has halted, @NYSE claims that it's not the result of a cyber attack. pic.twitter.com/yOazgGJ7mn

Thank God for Twitter, otherwise journalists would have nothing to do during a financial crisis. 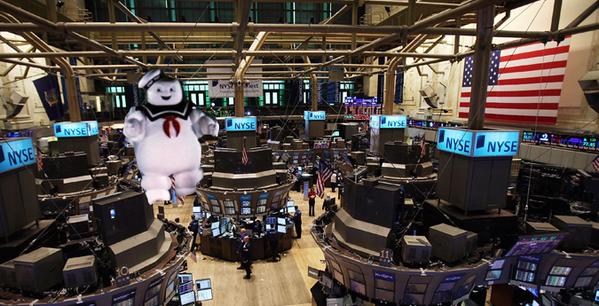