When people hear that Will Pierce wants Joe Biden to be the next president of the United States, they usually react in one of two ways.

Yes, there is an election coming up. And no, Vice President Biden, that swaggering septuagenarian with a penchant for Onion-worthy flubs on the stump, is not running for president.

Mr. Pierce intends to change that. He serves as organizing director of the Draft Biden 2016 committee, an increasingly well-staffed PAC with a mission to convince Mr. Biden he should run for president—2008 and 1988 be damned. He’s recruited veterans from those unsuccessful presidential runs as well as youngsters who want to see Mr. Biden cement President Obama’s legacy.

So far, Mr. Biden has not ruled out another bid for the White House, even if the odds are long that he’ll jump in. Mr. Pierce, an affable, slim 27-year-old in a blue button-down shirt, thinks a decision will come in August. “Our Election Day is August 1. That’s the way we’re looking at it.”

Over a hamburger and fries at Barleycorn, a cavernous bar near City Hall, Mr. Pierce earnestly insisted that only the former senator from Delaware has what it takes to knock out a Republican next November.

“He’s a man who we know flat-out can win the general election. Hillary carries a lot of baggage,” he said, whereas Mr. Biden has “cross-party appeal.”

Mr. Pierce reveres Mr. Biden for his foreign policy experience and role as Mr. Obama’s right-hand man. An army reserve captain, Mr. Pierce said he did advance work for Mr. Biden and his wife during the 2008 and 2012 campaigns. Dr. Jill Biden knows him better, but the veep could pick him out of a police lineup, he insisted. “She used to call me ‘the captain’ because I’m a captain in the reserves,” he said. “The vice president … he’s like, ‘I know that guy, but I don’t know where I know him’ kind of deal.”

Though it only launched in March, the Draft Biden movement is, surprisingly, gaining momentum. There are about a dozen paid staffers, 2,400 volunteers and an upcoming rally planned at a minor league ballpark in Wilmington, Del. The Wall Street Journal recently reported that Mr. Biden’s children, including his late son Beau, had urged him to run for president.

Mr. Pierce wouldn’t tell the Observer how much money the committee raised, but promised a significant haul. Beyond staffers, the cash also pays for a life-sized cardboard cut-out of the vice president and “I’M RIDIN WITH BIDEN” bumper stickers depicting Mr. Biden at the wheel of a convertible ($5) and other Biden-abilia.

The sticker won over at least one Democrat who may stand in the way between Mr. Biden and the Oval Office.

Bernie Sanders “knows about us,” Mr. Pierce said. “We gave him a bumper sticker and he was like, ‘I like that’ and took one.”

A version of this story appeared in the July 13 print edition of The New York Observer. 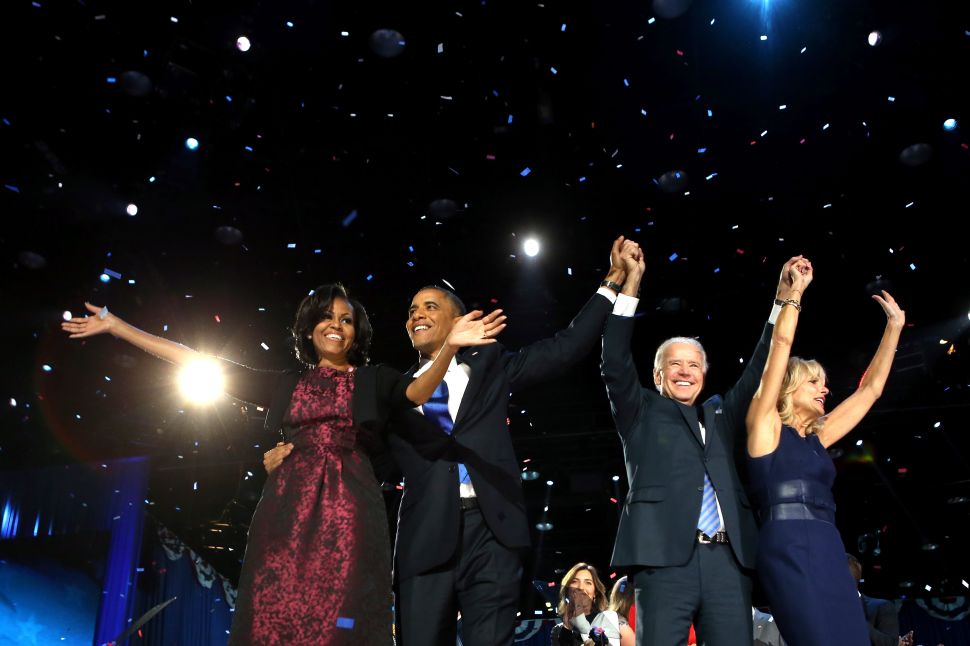