We all claim to be obsessed with Chipotle. But are we actually?

Yesterday afternoon, a Redditor sporting the username JohnMarkParker put our so-called Chipotle love to shame when he revealed he’s eaten at the restaurant every day for the last 101 days.

During the IAmA where he discussed his daily Chipotle regimen, fellow burrito-loving users were quickly captivated as they pondered the host’s go-to bowl. But it wasn’t long before the subreddit’s moderators shut down the fun, claiming the topic wasn’t suitable for IAmA. The Observer, however, reached out to JohnMarkParker—whose real name is Mark Rantal—for the rest of the story.

So how did the Chipotle marathon begin?

“The ‘why’ is a combination of convenience, diet and a dare,” Mr. Rantal wrote on Reddit. Outside of the IAmA, we asked what was going through his head as he started this and if he had a number of days in mind as a goal from the beginning.

And despite the fact that Mr. Rantal has ordered the same thing everyday, (burrito bowl with white rice, pinto beans, fajitas, sofritas, pico de gallo, corn, medium salsa, cheese and lettuce, shaken and eaten with chips and ) he says he’s “not even close to sick of their food.” He has no idea for how much longer, but he’s certain he wants to keep this going.

“The idea of doing this for a year is hilariously appealing,” he told the Observer.

So far, he says he’s spent around $700, most of it at his local Chipotle in Colorado Springs. To no surprise, his daily visits have garnered some attention from the staff. We asked if he even has to order upon arrival or if they just make his go-to sofritas bowl automatically.

“They’ll mess up sometimes by thinking they know my order then reaching for the black beans instead of the pinto, but usually I repeat my order. I imagine that they go through so may people a day that I blend in to all the order chaos,” Mr. Rantal said.

“The staff is awesome. I definitely get big smiles from most of the staff, which almost always elicits a big one from me,” he added. They’ve even served his chips with a heart drawn on the bag on a few occasions.

Friends, family and acquaintances are finding the whole thing amusing as well.

“Most people who know me well take a stance of ‘You would do something like that.’ I’ve received a few Facebook comments about being people’s ‘hero,’ which is delightfully amusing.” he said.

It’s a fun topic of conversation with his coworkers, who join him at the fast-casual restaurant a few times a week and have gotten jovially acquainted with the staff as well.

“My girlfriend understands. She’s got several reasons not to be thrilled. But she gets me, and occasionally she’ll get burritos with me,” he said. Sounds like true love.

Redditors—being the kind individuals they are—of course expressed concern for Mr. Rantal’s health. He admitted he’s gained about 14 pounds, but says that’s what he wanted; he lost a lot of weight when he switched to a vegetarian diet and it “freaked [him] out.” He claims to have only felt “meh” a couple of times.

Looking forward, he told the Observer he wants to talk to a nutritionist to make sure he “isn’t being incredibly dumb.” 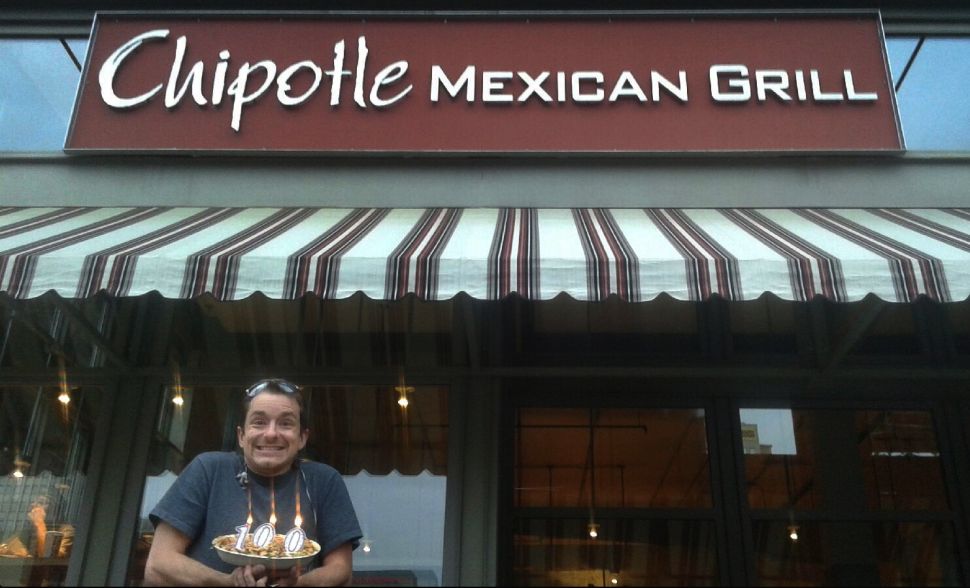