Drew: On a scale of 1 to Vince Vaughn (re: grills), how furious were you when you realized Colin Farrell was still alive? I mean sure, we all knew he would be. But we saw him get shot at point blank, with not a foot between him and Big Bird. No way some of that buckshot didn’t penetrate.

Vinnie: I wouldn’t quite say I was angry enough to tell my crony to get the clamps quite yet (where did that guy get those clamps anyway? His gangster henchman utility belt?) Because no matter which way you look at it, Pizzolatto was in a “damned if he does, Season One if he doesn’t” situation. If Ray’s dead everyone is up in arms that quite possibly the only fully-outlined detective we have is gone, if he’s alive it looks like like a cheap attempt to build some excitement.

Which, no matter what, whoa boy was it a cheap attempt to build some excitement. Tomorrow in the office I want you to shoot me point blank with some buck shot, because apparently I’ll just need a nap and a fever dream and I’ll be back on my feet.

Drew: At least Ray got to spend some quality time with his dad in the Black Lodge. I love how Fred Ward was just spouting non sequitors both in the dream and, later, in reality. That’s an admirable amount of character consistency for a show where everyone acts like they took a bunch of Ambien and Xanax and accidentally ended up in a collective dream. With, I might add, what I first mistook to be a Roy Orbison/Elvis impersonator, but apparently was just the world’s shittiest Bette Midler drag queen? Who, no joke, I ALSO thought for a second could be Duck Phillips, but in my heart (that aches, because of all the buckshot + new Emo feelings), I knew it wasn’t. That would just prove my insane fan theory from the first episode, and if there is one thing we know Nicky P. hates to do, it’s prove stuff.

Vinnie: I did have a brief flash of PTPSD (Post Twin Peaks Stress Disorder) in that opening scene. But I also really, really liked that they opened with that scene, even if it did lead to the lolRay’sAlive reveal. Because it was just so…unexpected? Like True Detective finally being secure enough with itself to throw out a David Lynch-shaped curveball, which for the record would be the scariest curve-ball ever thrown.

Drew: This whole episode felt more connected to the dream logic universe of Muholland Drive than it did to the noir LA corruption conspiracy world, which is very rooted in reality. It’s an obscured reality, but it’s still something that is knowable once you have enough evidence. The idea that there’s NO overarching plan is the truly terrifying thought, and I like the idea that this is the direction that True Detective is pointing after the first season resolution that Rust came to about the cosmos/his daughter/light or possibly stars I think?

Maybe this season, there IS no larger Yellow King conspiracy. Maybe Shit is Just Weird. Maybe there are a ton of different forces at play, but none of them are the man behind the curtain, pulling the strings. Maybe there’s no Charles Manson: Secrets of Homosexuals in the Nixon Administration theory at play, because that would imply a powerful collusion. What’s scarier is the idea that it’s all unconnected, at the bottom. There is no larger sense to this. Sometimes the rats are just going to eat your hands because daddy drank.

I guess what I’m trying to say is that True Detective needs to not be about detectives. This is a show that hints at a vast madness that we will never see, since our main characters will always include someone whose job it is to preserve the illusion of structure and order. The police are the Authority, so of course anything that’s subversive or bizarre will always be cut right out of its sightline.

Also, as someone who has been to LA, I can tell you: they are ALWAYS filming Mad Max out there! It’s the only thing that keeps the Hollywood industry town afloat, that franchise. THANKS OBAMACARE/TAX CREDITS/MADE IN NY!)

Vinnie: IF THE SCARY HOBO FROM MULHOLLAND DRIVE SHOWS UP I AM OUT, OKAY? I AM DONE.

Ahem. Anyway, I agree that this show finally decided that you don’t need to throw out a thousand questions you know you aren’t going to answer to be cool/creepy. But I am starting to get some vibes of a larger Cali-Cosa, with some shady individual taking pictures of Paul from the shadows, someone obviously gunning for Frank, and the man in the spooky mask setting fire to Ray and Ani’s car before fleeing into that hobo village oh no I swear that scary hobo from Mulholland Drive better not show up.

Drew: That guy taking pictures was the cop Ray was working with last episode. He looks like Jerry from Parks and Recreation, which is the only reason I remember.

Vinnie: But I also think your point about this show needing to not be about detectives is sound, because I noticed why even as it gains steam this season is still not going to ever become the phenomenon season one was; because last year we got some unorthodox shit. We had the dual timeline, the unreliable narration, Rust’s philosophizing, his zen-like abilities to get confessions, the setting of swamp-land itself. This year, for large, unending episode chunks we’re getting detectives…doing detective work. Like, asking a bunch of questions of a bunch of boring witnesses. Instead of “We get the world we deserve,” the tagline for this season should have have been “Hey have you seen this guy?”

Drew: “Hey, do you know any good party planners?”

I loved it when the movie set dude was like “Yeah, there were girls there. They make up over half the population.” Hahaaaa, perfect. The movie industry is completely unfazed by this relatively uninteresting murder case. They’ve seen much weirder shit.

Hey Vinnie, how great was the house of Vinci’s telecommuting mayor? I have this really sweet notion that maybe all the Russian prostitutes from the second season of The Wire ended up married to high-rolling political figures, sucking on the world’s most giant plastic bag of *drugs question mark?*

Vinnie: I can’t have been the only one who was hoping that bag was filled with helium, and she was just going to talk with helium voice and it would never be explained? And the big unanswered question this season that people would talk about for months afterward was going to be “what the hell was up with that helium voiced Russian woman??” Like, countless internet theories on it. Just me?

Drew: It was whatever Frank sucked on out of the tank in Blue Velvet. Holy shit, did I just solve the Ur-Text question of this season?? Is it just DAVID LYNCH? That would redeem the whole show, IMHO.

Vinnie: Also, if there are any true detectives out there who want to solve the mystery of whether or not party planners actually have to talk like that for business purposes please reach out to me.

Drew: I hope True Detective Season 2 turns the corner and becomes less Law & Order and more something from Gregg Araki’s Teenage Apocalypse Trilogy, where things are just weird because they are and everyone is just trying to deal with it. We’re just going to accept as fact: Things vibrate with a stranger frequency out in LA. EVERYONE talks like Rust Cohle.

That’s why the death of a city commissioner–which is still the ONLY THING that’s driving this show’s narrative in between its obsessive penis-gazing**–can be this long, extended riff that doesn’t lead anywhere at all. Because in no world does it matter whether or not this was a conspiracy or a random act. Either way, who gives a fuck? Just give me my vertical mall, e-cigs, weird animal masks and Ojai spa cults run by Rick Springfield. That’s enough.

**Sorry, that was a reference to the best character ever: a TV critic discussing True Detective and wearing a wig to look like Vince Vaughn’s wife.

We’ve snuck into the fertility clinic (like seriously, that can’t be allowed AT a facility, can it?) to give a beej to the show, which can’t even get it up for us. That’s the perfect metaphor for True Detective. Just me saying: “God forgive me for misreading what subtle clues you embed for me in your limp dick.”

Thanks for giving me a voice, Nic Pizzolatto! Got something for the ladies tonight!

Speaking of which, I don’t want to say I’m THE true detective, but I totally called Paul being gay last week. And while the signs might have been, I guess, subtle last episode, here they were a little more BAM in your face. And yes, I’m mostly talking about his rage at his army friend and that prostitute not-so-subtly telling him he can do girls “in a pinch, with the right medication”, or even the fact that he can’t even be in the same vicinity of gay prostitutes without shaking and ordering double shots.

But I’m also kind of just talking about the fact that he attends indoor moto-cross races.

Drew: That’s another one of these “Who the fuck cares?” questions. Who would give a fuck if Taylor Kitsch (or whatever the character’s name is; I’m going with “Concussed Tim Riggins” this week) is gay. It would literally only be helpful to his case if people discovered he was a homosexual, since that would make that celeb Beej scandal disappear.

Vinnie: Hey, want to hear my completely unfounded theory/question of the week? Is this sassy, smoking prostitute that provides information 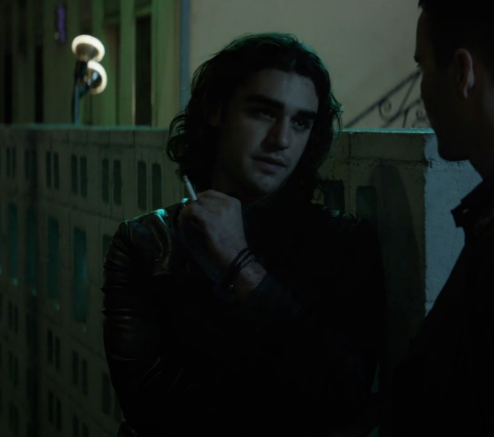 the same as this sassy, smoking prostitute that provides information? 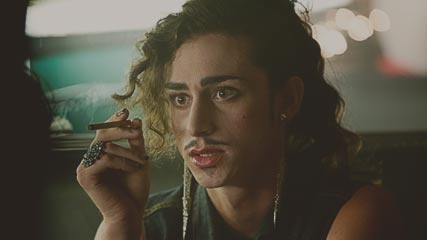 Okay, I’ll play…I bet they are related. From the same weird facility that all the children from the first season came from. NOW, you answer me: is this the mayor’s son or Neil Patrick Harris with a spray tan and a degree from Method Accents University? 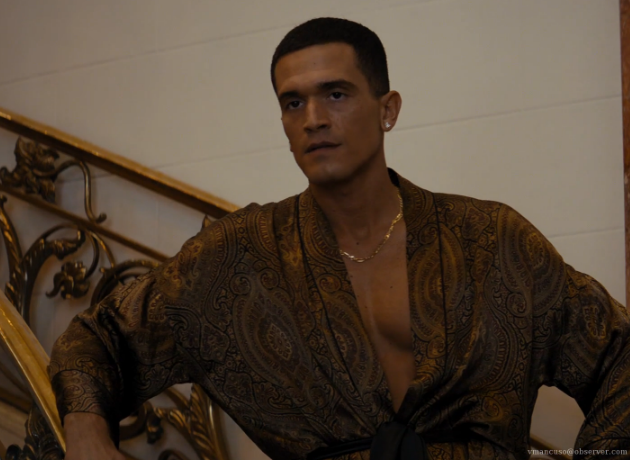 Drew: Final thoughts? We didn’t talk about the case against Ray, or his dad issues, or Rachel McAdams’ hookup slut-shaming her at work.

Vinnie: 1) “You want to thank me, tell me what the state has on me.” I really enjoyed how awkward of a time it was for Ray to ask for this information. 2) Nothing counts as “dad issues” on this show anymore until he locks you in the rat cellar 3) I’m pretty sure Rachel McAdams’ hookup was so upset over the breakup that he quit the force and went into corrections, where he finally got a job as a prison guard with a grudge against women and the nickname Pornstache. 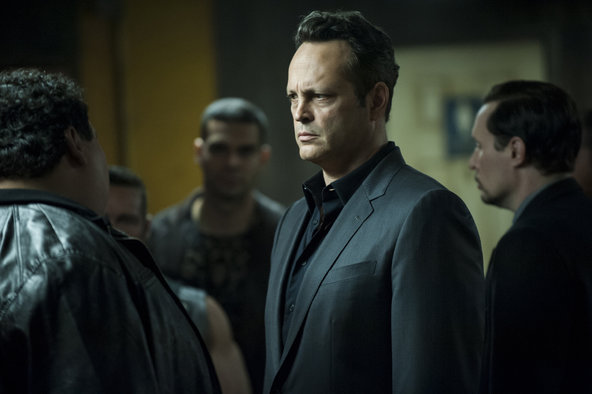