(Editor’s note: Drew is currently being held in the commune run by long-haired David Morse, and hasn’t cleared enough cult levels to get the HBOGO password yet. Or she’s on vacation with limited access to internet. Either way, Vinnie is taking this recap by himself. However, Drew did pass along three predictions for the rest of the season: 1) The waitress in the world’s saddest bar, the one with the facial scar, is more involved in the investigation than anyone knows 2) Lieutenant Burris (James Frain)  is the bird-mask-man and 3) “Taylor Kitsch is going to go Manchurian Candidate.”)

Welcome to the season two premiere of True Detective! In this episode, we were introduced to our three main lead detectives, got lots of long and girthy backstory on each of them — you know, catching up on their jobs, their hobbies, their lives, their paternity cases, etc — before spending the last ten minutes bringing all three together to solve this season’s case and waaaaaait a minute. We’re five episodes in, aren’t we?

But “Other Lives” really did feel like a reboot, didn’t it? And not really in a positive way. More like in a “now we’re starting the real mystery, sorry we made you sit through all these Frank and Jordan arguments” sort of way. (Although this episode pulled off the incredible and cut away from an argument between Frank and Jordan, cut to another scene, then cut back the the same argument. Truly amazing.) Actually, I’d spell out how the show feels about the first five episodes, but Ani did it perfectly herself.

That about sums it up. But since the show is so set on catching everyone up 66 days after some gang-members killed everyone whose name isn’t in the opening credits, I guess I better do the same.

Frank: I don’t know what you heard about Frank, but the important thing here is that you can’t get a dollar out of of him. This reference to a 2003 song by 50 Cent (featuring Snoop Dogg) is all to say that Frank is basically a pimp now, running girls through his poker room. He’s also downsized to a much smaller house, and if the symbolism was too subtle for you this house has no stains. He moved out of his vast, luxurious house bought with blood money and now the haunting evil  stains of his past are gone. Also, he’s totally down to adopt now, because him and his wife’s attempts to conceive are the equivalent of firing blank bullets into the night sky trying to hit the moon at this point

Paul: Detective Night Lights is working insurance fraud cases, which is rough because the only thing Paul cares about in this world is riding his motorcycle, with or without headlights. Only the really exciting insurance fraud cases involve motorcycles, unfortunately. To make matters worse, his mother took the $20,000 he brought home from Afghanistan. Which, okay, I’d be upset too but come on Paul. That trailer has one room, one and a half tops. There’s like six cabinets in the entire thing. Real sweet hiding spot for your cash, Paul. But anyway, they fight. She tells him he could have been a “scrape job,” which is, just, man that’s just awful.

Ani: You ever seen one of those sexual harassment workplace videos, where the people in the videos act out very obvious and very disgusting sexual harassment just to highlight how gross it can be? Well, those people came to life and are sitting in the sexual harassment seminar with Ani. In her spare time, beyond the seminars and the evidence cages, she’s still investigating that missing girl that she sort of forgot about for a little bit there. Tuns out this missing girl had some photographs from these famous sex parties we keep hearing about (see: any given night in Hollywood), as well as some photos of those mysterious blue diamonds from Casper’s safe deposit box.

Ray: First things first, True Detective just became a lot more fun if you tape a paper mustache to your TV and wait for Ray’s newly shaven face to match up with it. Certainly helped me pass the time. But yes, where to even begin with you, Ray? First, he dropped all pretense of being any sort of law-abiding cop and now works full-time for Frank. This includes following Frank’s red-headed henchman and confirming that yes, shady rich people do like prostitutes. He’s also balls deep in his paternity case, and he’s still recording nonsensical messages for his maybe-maybe-not-son. If this show does only one flash forward in time, it should be to when his son listens to these recordings and says “what the fuck are you talking about dad? ‘Pain is inexhaustible’ how does this help me grow in any way?”

If that’s not enough, Ray gets the casual bomb-shell this episode that the name Frank gave him, the name of the guy that raped Ray’s wife, wasn’t the right name, and Ray killed the wrong guy. Ray’s rage at this news causes a brand new mustache to grow on his face immediately. Wait…wait sorry no. That was just the fake one lining up.

SO! Now that we’re all caught up and there’s about fifteen minutes worth of episode lined up, this lady pulls the gang back together to let them know they’re now part of a super important secret task force that’s totally off the grid and basically just a somehow-sadder version of the Suicide Squad. (Sidenote: that actress, Michael Hyatt, is basically playing the exact same role she played in Nightcrawler, lending to my brand-new as of this second theory that this season takes place in the same California universe as Nightcrawler. Where you at, Gyllenhaal?)

Each detective goes about this new investigation in their own way. Paul, being Paul, goes to a few jewelry stores. Ani, being Ani, asks her sister to get back into the sex party game to try and score an invitation to one of those sex parties. And Ray, being Ray, beats the shit out of Rick Springfield for anyone who has ever had godddamm Jessie’s Girl stuck in their head.

It’s Rick Springfield that offers up the most interesting information, along with a few of his teeth. Apparently Casper and Chessani’s incredibly tan and multi-accented son used to use their sex parties to film politicians in compromising situations. This included the president of Catalyst, which is the development company in charge of the land deal that Frank was supposed to be a part of and everything comes full flat circle.

Meanwhile, the duo of Ani and Paul are heading out to the last place the missing girl called from. And again, if the subtly of this show was too above your head, they drive past a literal Jesus carrying a cross on his back. Good thing none of these characters are carrying a metaphorical load or anything, or else boy would that be on the nose. Oh, and for those fans out of there who like the little hidden clues, I think I might have found some discreet bird imagery.

No, but seriously how funny was it when Ani saw birds flying in the sky and was like “It’s a clue!” If that’s not a metaphor for watching True Detective, I don’t know what is. It’s not a good sign for the finale of this season that this bird clue just led them to a smelly, empty chair.

We leave off with Ray showing up at Frank’s little suburban home asking to chat. Frank’s upset because he’s fresh off some non-baby-making sex. Ray’s upset because of that one time Frank had him murder the wrong rapist. It’s this whole big thing.

But what does it all mean? Here’s some ideas:

Unless, of course, Ray shoots Frank with “riot shells” in which case Frank will take a snooze while we get a Conway Twitty impersonator dropping “Hello Darling” and Frank’s dream-dad talking about the rat-cellar days. 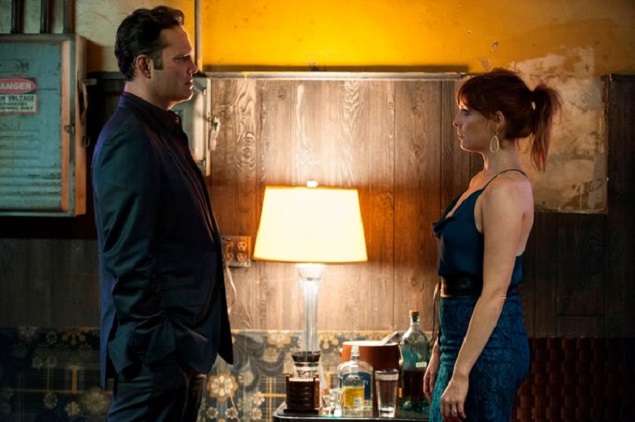