Two Step is a chicken-fried Texas melodrama that cross-stitches the lives of two men on opposite sides of the law in a torrid tale of murder and grand larceny in a Lone Star town time forgot. Made by a first-time writer-director, Alex R. Johnson, with a cast of talented actors with Southern drawls nobody has ever heard of, it was a big hit at last year’s SXSW film festival in Austin, but I doubt if it makes much of a dent north of the Red River.

James (Skyy Moore) is a college dropout without guidance or guile who gets kicked out of computer classes at Baylor and ends up at his grandmother’s house. With no parents or siblings, Grandma is the only relative he’s got. As soon as he arrives, she dies, leaving him $85,000. His new neighbor is a tired, blonde, been-around dance instructor named Dot with a tattoo and four ex-husbands (Beth Broderick) who hangs out in bars teaching folks in boots and spurs how to do the Texas two-step.

While sifting through Grandma’s financial affairs, James discovers someone posing as her grandson on the phone has been plundering her bank account, bilking her of thousands. The culprit turns out to be a smooth-talking career criminal named Webb (James Landry Hérbert), who gets out of prison after eight months for attempted murder and heads straight for James’ front door desperate for money. Webb needs to pay off an old debt to a local gas station owner named Duane (Jason Douglas), or else. When he figures out who James is and discovers he’s inherited Grandma’s entire fortune, he whips the kid into raw hamburger and ties him to a kitchen chair.

Everyone wants James’ money, so the body count rises as Webb kills off the competition one by one, including his ex-wife Amy, the lawyer handling Grams’ will, and assorted thugs and studs in Stetsons, saving James for last. In a plot maneuver that makes no sense at all, it takes him forever to finally get around to Duane, who has been sleeping with Amy. Why didn’t he just knock off Duane to begin with, leave town and save himself 90 minutes of blood and violence? This is not the kind of movie that holds up under close scrutiny, but there’s a smidge of modest suspense while James’ enemies conspire to relieve him of his inheritance, waiting to see if and how he will untie the ropes and escape from his ordeal in that kitchen chair, with tough Dot as the boy’s only key to survival.

There’s a lot to admire in the slow-burning build of Texas ambiance and dialogue. This is a world of people who drown their fried eggs in Tabasco, and sate their appetites with a steady diet of barbecue and fried onions called fronions, washed down with Bourbon Barrel Aged Hellfire. Take my word for it. These Texas longhorns really exist, and writer-director Mr. Johnson knows the territory. What he doesn’t know (yet) is how to thread the aimless pieces into a forceful dynamic. James Landry Hérbert, who drawls like Matthew McConaughey, steals the movie as the mercenary villain Webb, but Beth Broderick has the best line: “I am not a can of corn, just sittin’ here gettin’ old and dusty waitin’ for you to pull me off the shelf.”

Overwhelmed by bad country-western ballads, Two Step is flawed but it makes you laugh and cringe at the same time, and passes 90 minutes painlessly. 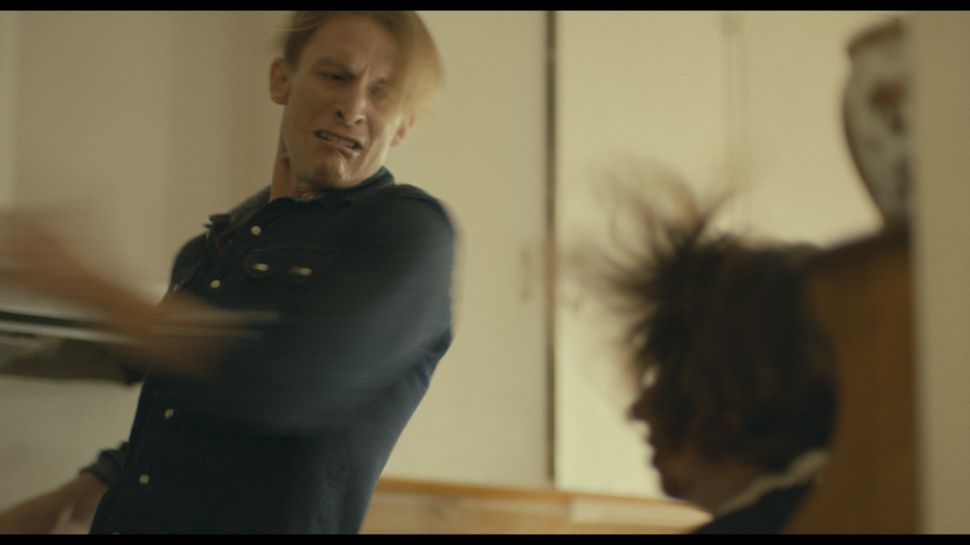