Uber is using every minute they have to show the city that Mayor Bill de Blasio’s potential cap bill will hurt the company and hundreds of New Yorkers looking for job opportunities. The vote could come as soon as tomorrow, and Uber knows the consequences will be detrimental for their business.

The point of yesterday’s event was clear: to show Mr. de Blasio that Uber is a platform that benefits New York by providing the city with hundreds and hundreds of jobs.

Inside Queensbridge Park, Uber stationed a tent for driver sign-ups. Hundreds of interested drivers lined up in a single file line that crossed the park. A current driver-partner also told the Observer that he was in line waiting to refer friends to the company.

Mr. de Blasio’s cap bill, Uber’s worst nightmare, could potentially pass on Thursday, which would put a clear, objective cap on the company’s growth in the nation’s largest city.

Over the next 14 months, if the bill goes into effect, Uber will only add 200 vehicles to the streets. According to Mr. Mohrer at a June 30th Protest, 25,000 New Yorkers take their first Uber ride every week, and Uber projects that over 10,000 new drivers will join Uber within the next year. With the cap bill, Mr. Mohrer claimed that an estimated 9,800 job opportunities will be lost only in New York.

The bill seeks to temporarily limit the issuance of new for-hire vehicle licenses during a study on the impact of growth in the taxicab and FHV industries on the environment, focusing on the industry’s effect on noise, air quality, and traffic.

In the midst of drizzling rain yesterday, some of Uber’s drivers shared their own Uber stories, coming to the stage as they pleased. Some told stories of previous homelessness, others told stories of how they used to make $200 a week to feed a family of five, and some told the large crowd that Uber made it possible for them to afford a college education. The message was clear and repeated many times: Uber has given its drivers a chance at something better than what they had before.

Mr. Adams, who arrived late, called Uber the “American dream” and added that, “the pre-cursor to the American dream is gainful employment.”

The Brooklyn Borough President expressed his opposition to the bill and asked it to be put “on hold until we can find out how do we correctly regulate without stymying an important industry like Uber.” Mr. Adams added, “The reason I came out here to join is to state that there is room for growth in this city. There’s room for prosperity.”

Distributed by servers, catered food and drinks were available for all, and the event took over an entire section of the Long Island City park.

In a statement released on Monday, Uber said it hopes to continue the jobs tour beyond yesterday’s event, planning to add six additional events over the next six weeks, sending the city a clear message that Uber is dedicated to providing New Yorkers, especially those from the outer boroughs, with opportunities.

This isn’t Uber’s first reaction to the Mayor’s cap bill. Three weeks ago, Uber partners held an organized protest outside City Hall. Last week, the company added a new feature to its app to show users how long it would take users to get a ride if the bill is passed: an average of 25 minutes.

On Monday, Uber also requested a live-stream negotiation with the Mayor over the bill, and Mr. de Blasio shut them down in a sentence. “I do not debate with heads of private companies over their own self-interest,” he said.

Needless to say, it’s been a tense week for Uber, and there’s definitely more to come. Mr. Mohrer and Chair of the Transportation Committee for the City Council Ydanis Rodriguez were also caught in a Twitter fight on Monday, with Mr. Mohrer claiming that Mr. Rodriguez was making up lies about Uber. 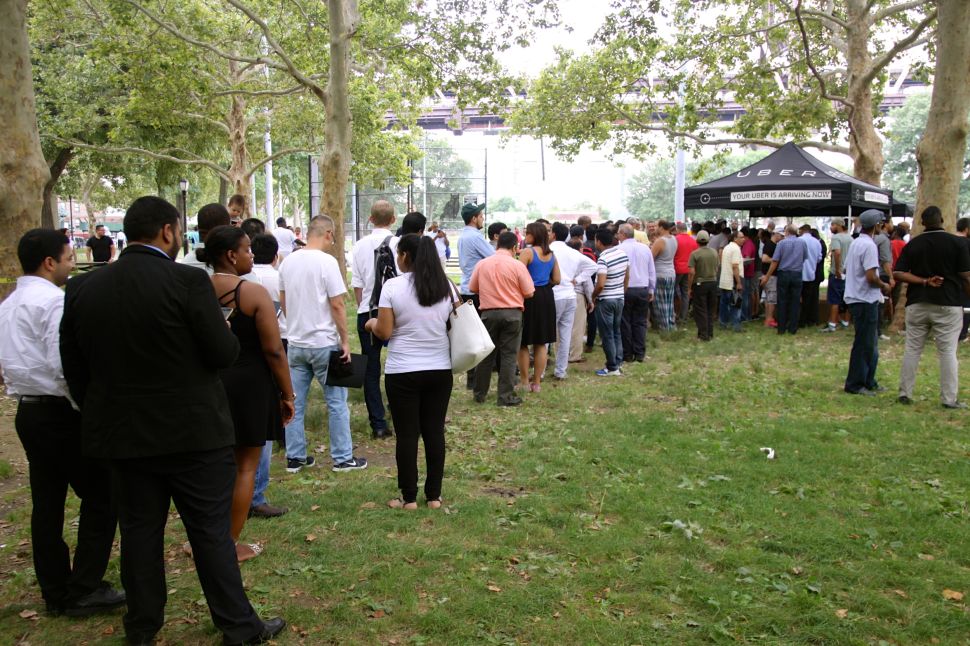