Movies and plays about pregnancy, childbirth and the attendant physical and psychological traumas that go with them are box office poison. Men don’t want to see them, women who have already been through it don’t want to relive the experience, and expectant mothers are often so upset by what they see simulated on-screen that their reaction could reduce the population by half. But sometimes nice things come in small packages, and Unexpected, a subtle saga about two women of different ages preparing to become mothers, is a sweet, honest, well-acted and carefully constructed little film that truly lives up to its title.

Samantha (lovely and self-assured Cobie Smulders, from the ghastly TV sitcom How I Met Your Mother) is a 30-year-old science teacher in an inner-city school in Chicago. When she finds herself unintentionally pregnant, she shares the news with her favorite 17-year-old student, Jasmine (Gail Bean), who finds herself expecting at the same time. Products of totally different backgrounds, they face an entirely opposing set of obstacles. Sam is affluent, white and sharing her life with her great, understanding and enthusiastic live-in significant other, John (Anders Holm), who marries her immediately and urges her to become a stay-at-home mom.

Since her school is closing, she will have plenty of free time, but she’s also first in line for a coveted position with a museum and finds herself conflicted. They’re doing it in the proper order, although her loving but meddlesome mother (the always excellent Elizabeth McGovern) is crestfallen to be denied the traditional big engagement, church wedding, then baby shower—not a cold, impersonal service at City Hall and pregnancy at the same time.

Jasmine’s story is different. A poverty-stricken black senior who is graduating with honors and looking forward to college, she comes to sudden pregnancy saddled with troubles—an alcoholic mother who deserted her to be raised by her elderly grandmother on welfare, a sister who is only 23 and already burdened with children of her own to feed, and a sullen, irresponsible boyfriend who refuses to marry her.

While they both decide to keep their babies and go through the phases of ongoing motherhood together, teacher and student find themselves forming a bond as their contrasting mixed-race narratives build along parallel lines. It’s an intriguing premise, directed with nuance by Kris Swanberg, who co-wrote the screenplay with Megan Mercier. As both writer and director, Ms. Swanberg is a talent with vision and self-assurance worth keeping an eye on.

We get the usual aspects of pregnancy—in no time, Sam is throwing up in class in front of her students, while Jasmine gorges on disgusting junk food. Sam doesn’t want to give up her career, despite John’s insistence, and arguments ensue over why society considers it a compromise to be a working mother, with John accusing his new wife of egotism and selfishness and Sam standing up for the equal rights of women. Jasmine loses her chance for financial assistance when the college of her choice refuses housing to expectant mothers and the immature father of her baby offers no emotional support.

Director Ms. Swanberg squarely deals with issues of gender equality, rules of employment that preclude motherhood, and the tender line a liberal wife must walk to keep her marriage and her dignity intact. Even the actual delivery, when it finally comes, is unexpected. Sam’s breaks in an automobile and the audience is spared the screaming theatrics other actors have been forced to simulate in other childbirth scenes. Best of all, there are no easy answers for Sam, no last-minute rainbow resolutions for Jasmine, and no awkward sentimentality for either.

In the final tally, Unexpected moves at too leisurely a pace and does not always feel brisk enough to sustain continual fascination with the subject of childbirth, but on the plus side, it’s filled with first-rate actors, it’s only 90 minutes long, and an admirable achievement by all concerned. 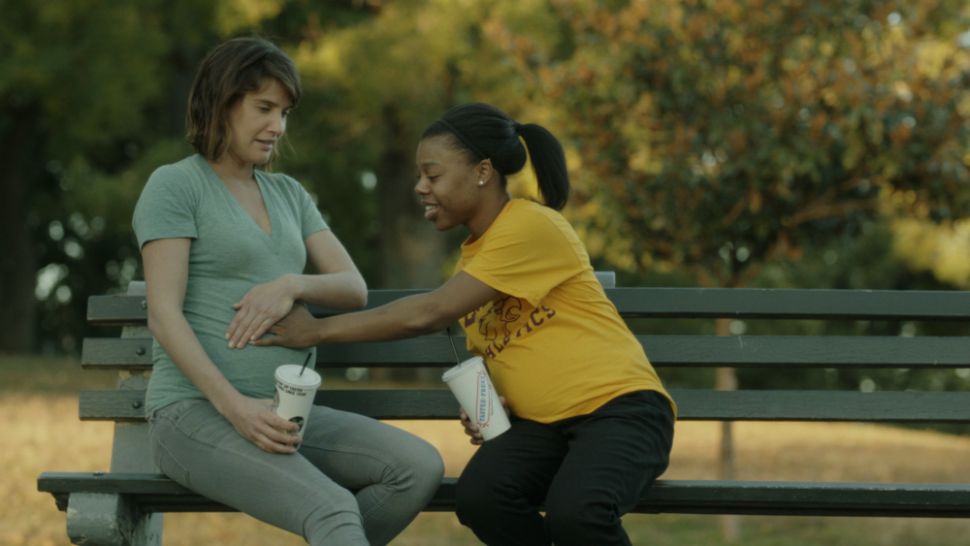